It looks grim for Sir Duncan and Louise, landing on the beach with Blackie and his gang…

…yet it gets worse as a rockslide leaves no escape.

Kevin quickly describes his plan to Louise; Blackie has other ideas.

A daring plunge hoists Louise out of danger and Kevin rejoins the fray.

Because the next chapter starts a bit abruptly, let’s back up one week to see what happened as the previous sequence transitioned. These were the first two chapters to follow Jay Heavilin’s credited writing stint, and the following chapter was clearly written by Collins (To me, the acrobatics in the finale are a dead giveaway). Dank u to my friend Arnaud in Rotterdam for the tabloid examples shown here.

Ah yes—Kevin was sailing from France to England with a load of precious cargo when a storm whipped up. And what a storm it was—instead of a relatively straight shot across the English Channel from Balinghem, France to London, the storm has driven the ship far to the north, toward the Scottish Highlands. There, a more genteel scene is set, and a host of new characters are introduced.

Reading between the lines, one can surmise that Blackie has an axe to grind with Sir Duncan McDonald.

With arson on his mind, the storm plaguing Kevin’s ship reaches Blackie and his band of hoodlums.

After bumbling upon the nefarious trio, McDonald and Louise bolt away blindly and tumble off a ledge. In hot pursuit, Blackie and his gang meet the same fate.

As this drama has been set, one notable absence from the past three weeks’ action has been Kevin. As it happens from time to time, others take the lead while the strip’s titular character sits out a few episodes. Sir Duncan and Louise could certainly use his help now!

In addition to the unusual tone of the story, the episodes themselves have a slightly different appearance—most have only six panels. And while the story is a bit silly, it does have a nice graphic impression. 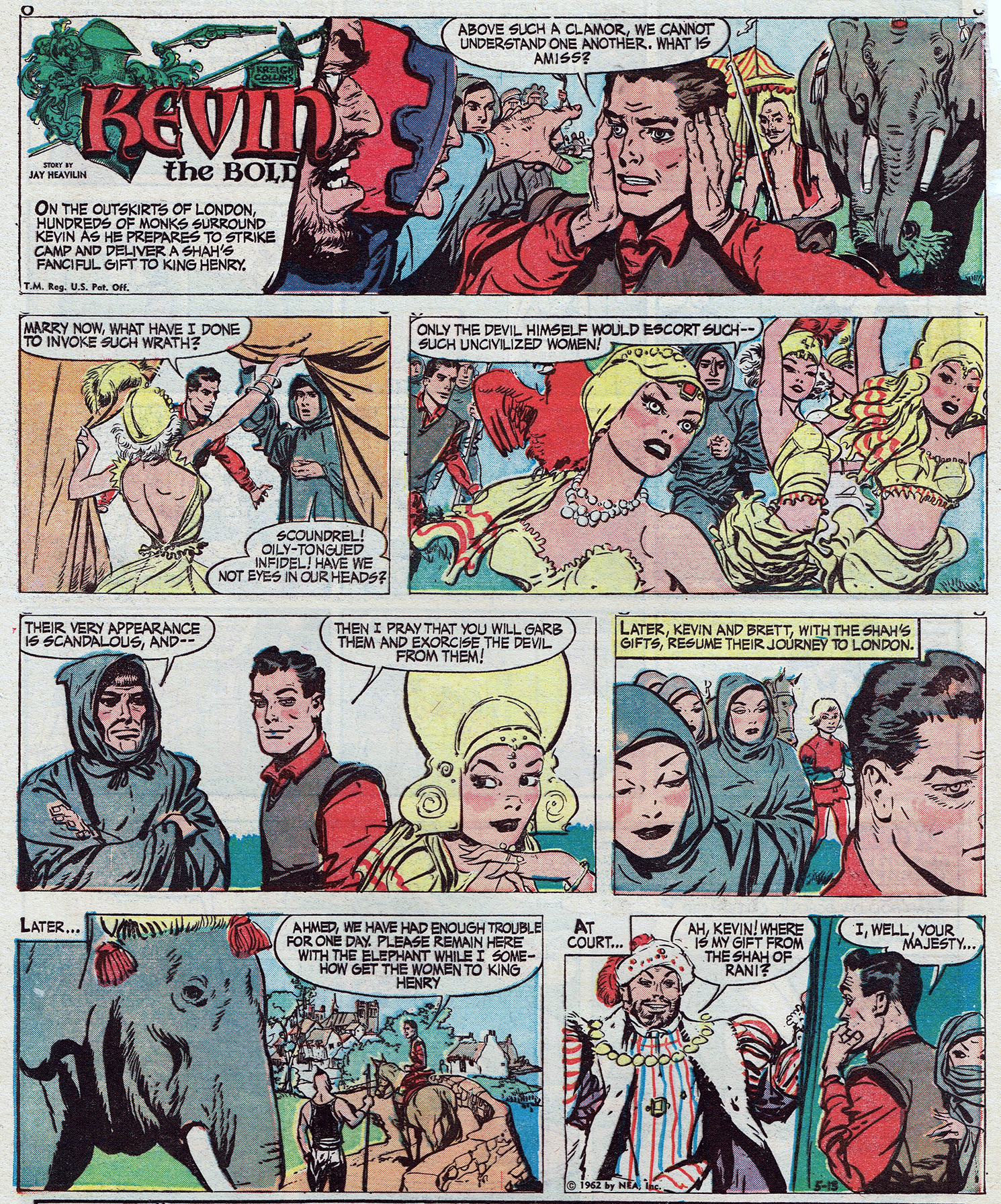 Kevin is fortunate to be able to persuade his antagonist to help display the “jewels” more discreetly, and as he reaches the king’s palace, he is relieved that his job is over. 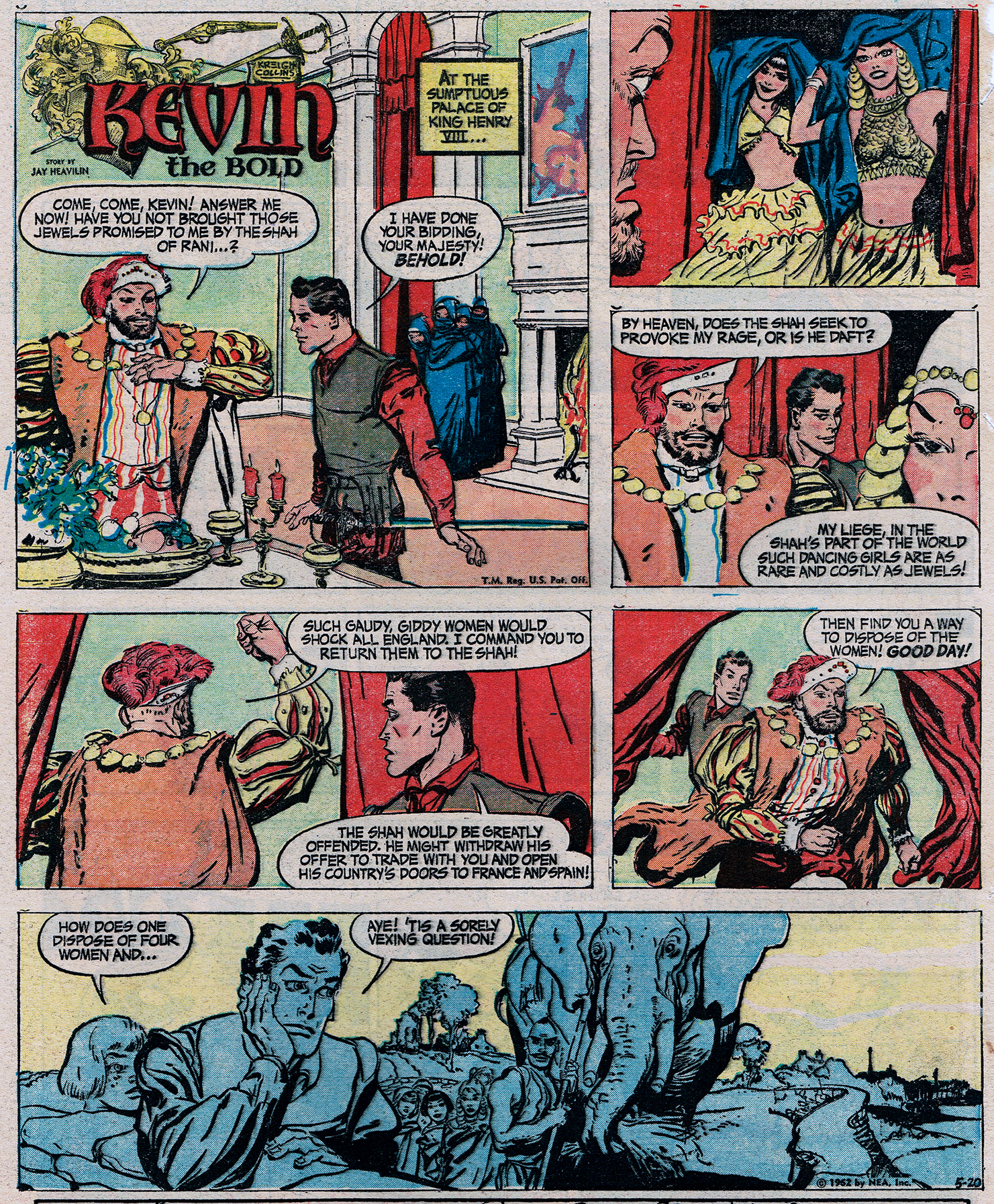 King Henry’s abrupt dismissal and useless advice, to merely dispose of the Shah’s gift leaves Kevin at a loss.

After a serendipitous meeting, Kevin seizes an opportunity to find a taker for the Shah’s gift.

Thanks again to Arnaud for the tabloid scans.

Here is a half-page version of this episode, which serves as a finale to both the story arc and Jay Heavilin‘s stint as writer for “Kevin the Bold.”

To follow the action as it returns to Kreigh Collins’ stewardship, click here for “The Field of the Cloth of Gold” sequence.

Kevin certainly knows how to keep his cool, and his new acquaintance is impressed.

What’s less impressive is the laziness of the name given to the Shah, an anagram of Iran. But a quick look online shows that the time period of the action does correspond to the beginning of the Safavid Empire, when rulers referred to as Shah first arose. Beyond that historical note, this sequence is as near to fantasy as Kevin ever strayed. It’s a good thing, because it all seems a bit cliched to me.

They seem to have made quick work of rebuilding the stone bridge, but danger lies ahead. Religious fanatics  are introduced, and they’re not the visiting Muslims!

The scans for the following story arc were a gift from my friend Arnaud.

This sequence marks the end of Jay Heavilin’s run as the writer for “Kevin the Bold.” Like much of the action he scripted, it is comes across as more cartoonish than Collins’ work. An argument could be made that this isn’t a bad thing, that Collins’ stories were too traditional, and were more like illustration than cartooning. I’m biased, obviously, but what do you think? (There is a little-used comments feature at the very tail end of this post—hint, hint).

The characters are largely stereotypes, but they do have some redeeming visual qualities. Both Ahmed and his female friends have visible navels, so maybe that ban was no longer in effect.

Pedro enters, and as was. in the case of the story “The Powder Expert” (which I haven’t yet run), there is some confusion about the meaning of a certain phrase. 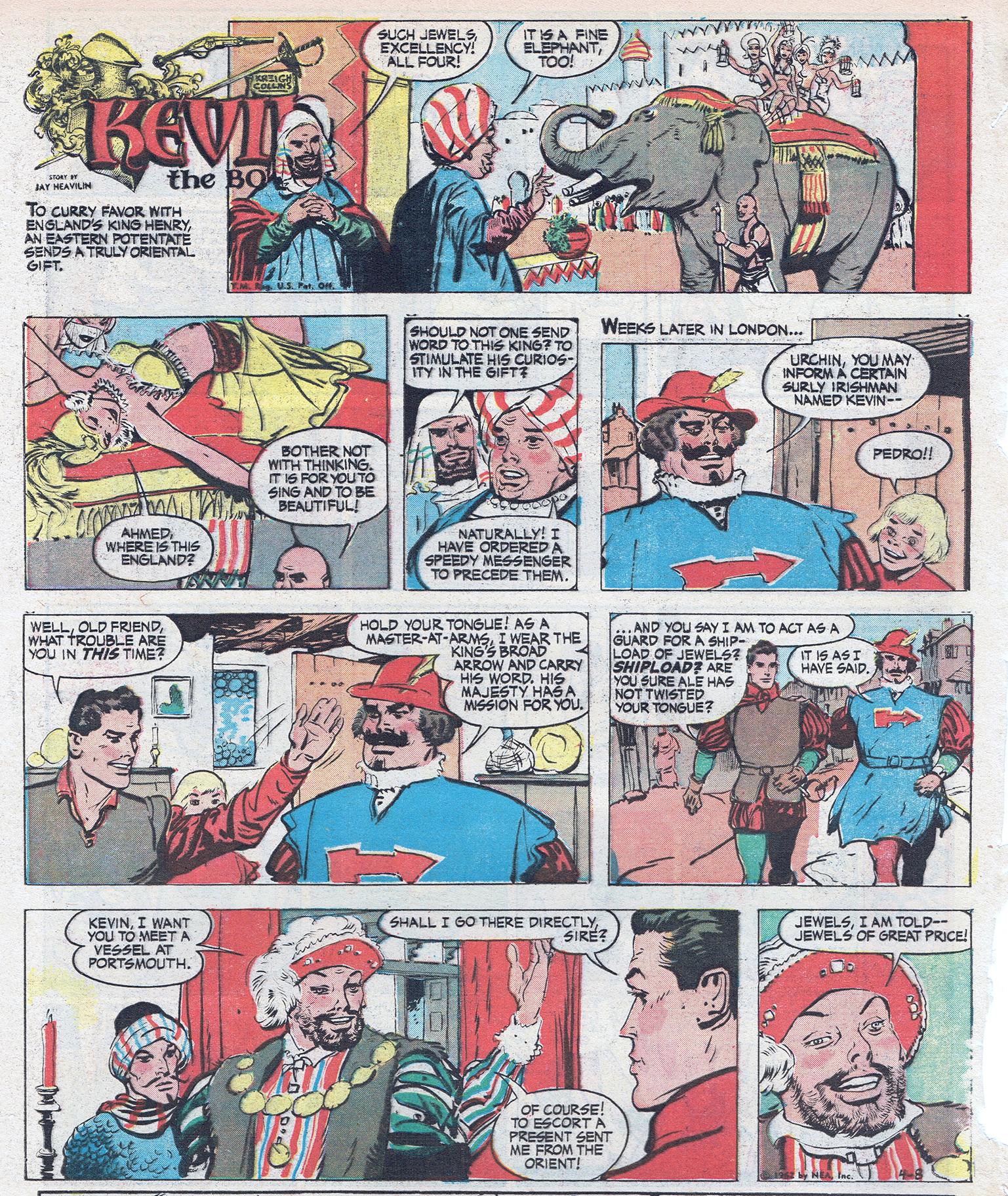 Two rivals vie for Lady Goodly’s affections, yet she only has eyes for another.

Kevin is trapped, and has only a risky escape plan. 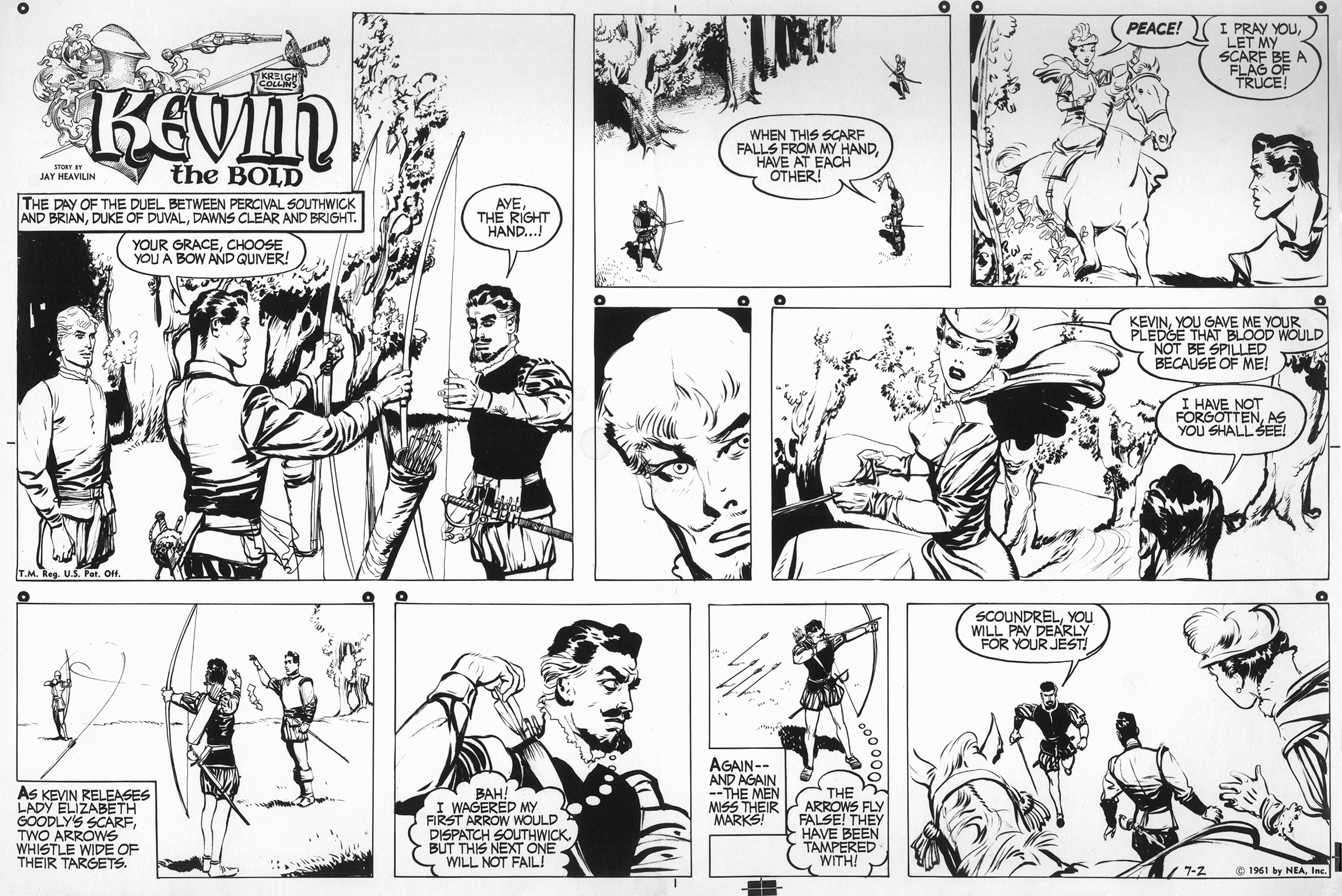 The Duke takes the bait, Kevin plays possum, and Percival? 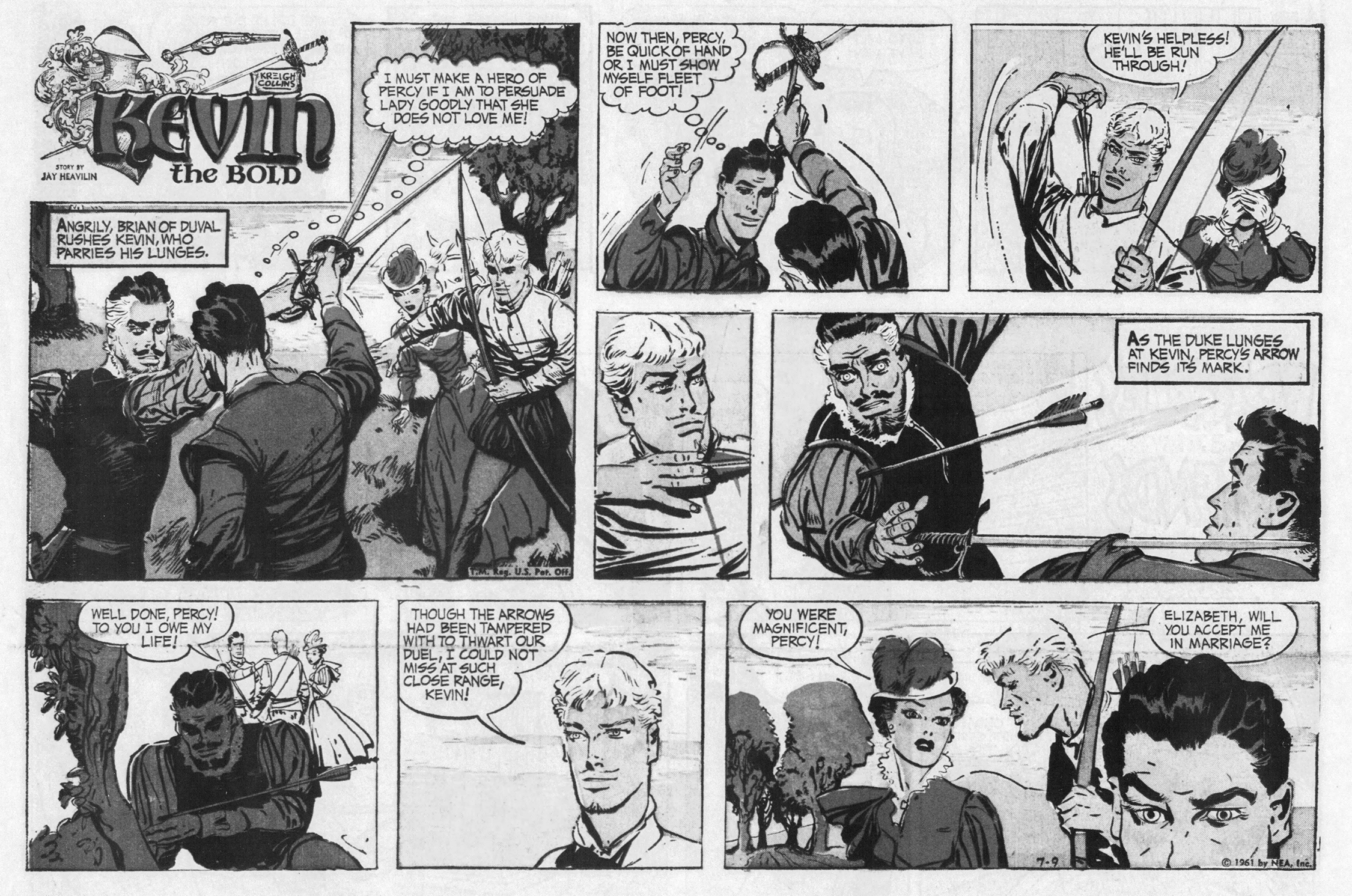 Percival came through in the clutch. Here are the sequence’s final two episodes in color, as third-pages; I don’t have a color example from June 25, 1961.

Like other cartoonists, Kreigh Collins looked to his family and friends when it came to naming characters, but sometimes the comic strip characters’ names came first. “Kevin the Bold” debuted several months before Collins’ son Kevin was born, and Kevin’s ward Brett appeared about nine years before my brother made the scene.

I’ve always wondered what my uncle Glen (Kevin’s twin) thought of the title of his father’s best-known strip—at least two characters named Glen eventually appeared, but they didn’t have large rolls. And while Brett played a major part, I always thought it would be nice if  there was a character named Brian.

In a case of “be careful what you wish for,” eventually a Brian appeared—he was a misogynistic cad. Appearing a few years before I was born, It’s not like I was named for him, but couldn’t his name have been spelled with a “Y”? This guy is especially onerous.

A black-hearted rogue, indeed! (What is especially galling to me was that the Duke’s bad behavior was in the name of procuring a birthday gift, and this episode ran on my birthday).

I guess I’m not the only one being overly sensitive, the Duke also seems a bit prickly.

Perhaps curious only to me, but in the two panels after the throwaway, the movement Kevin is making can only be described as “sidling.” Not commonly represented in comics—or anywhere, really—the only place I ever remember hearing the word is in this 1965 Johnny Cash A-side. A shame—it’s a great word!

Here are the first two episodes in color, as third-pages; I don’t have a color example from June 18, 1961.

With his vast experience dealing with both dastards and the downtrodden, Kevin is a quick judge of character. Upon meeting meek Percival Southwick, he must have sensed something in him—and he must have seen something in the character of the Duke of Duval, as well. Kevin decides to make a man of Percival, which he’d done before—a decade earlier with Prince Rupert. Therein lies my beef with new writer Jay Heavilin—in his first credited story, he’s already rehashing old plot devices… 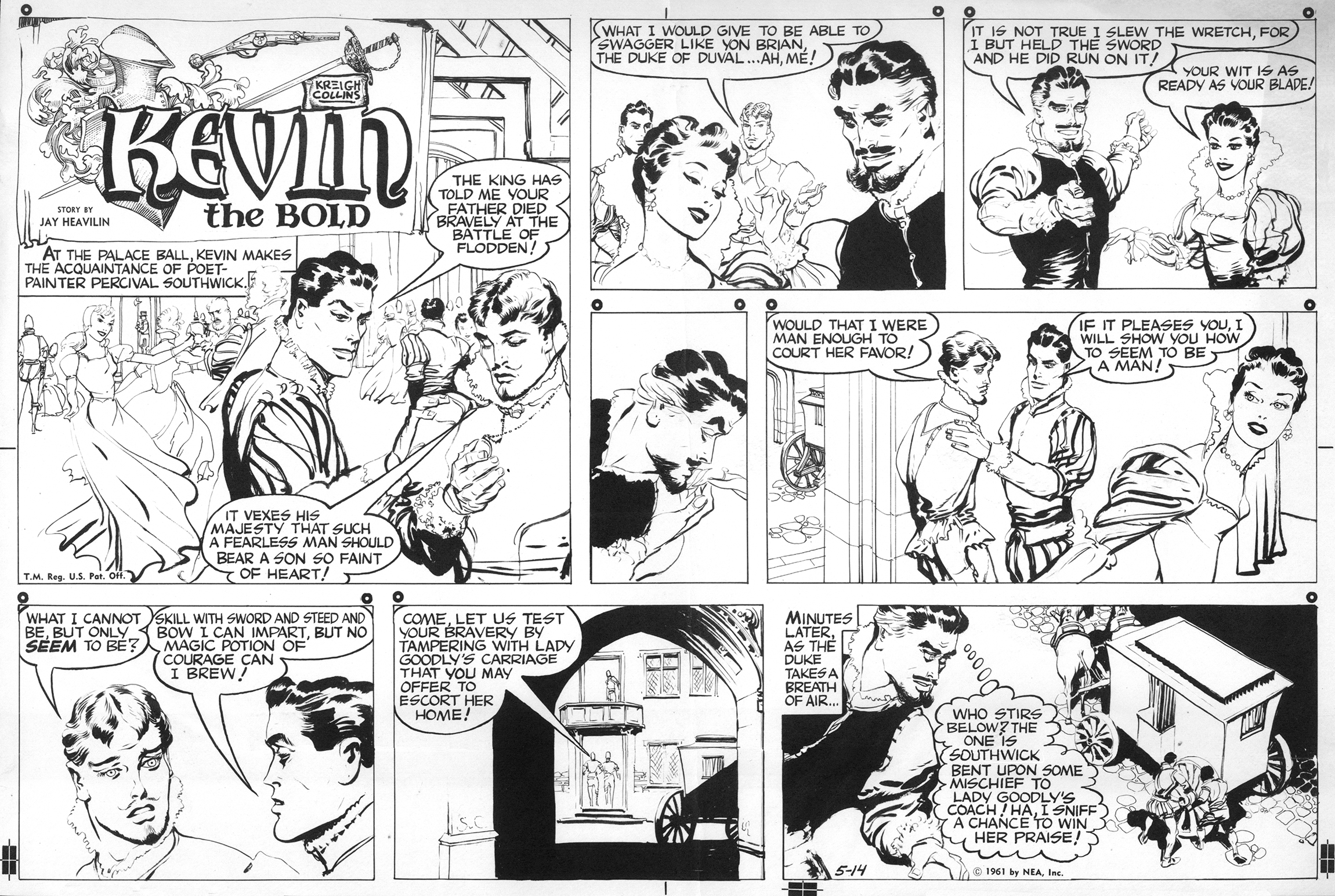 …Kevin is also back to playing matchmaker, but his clever plot is uncovered. 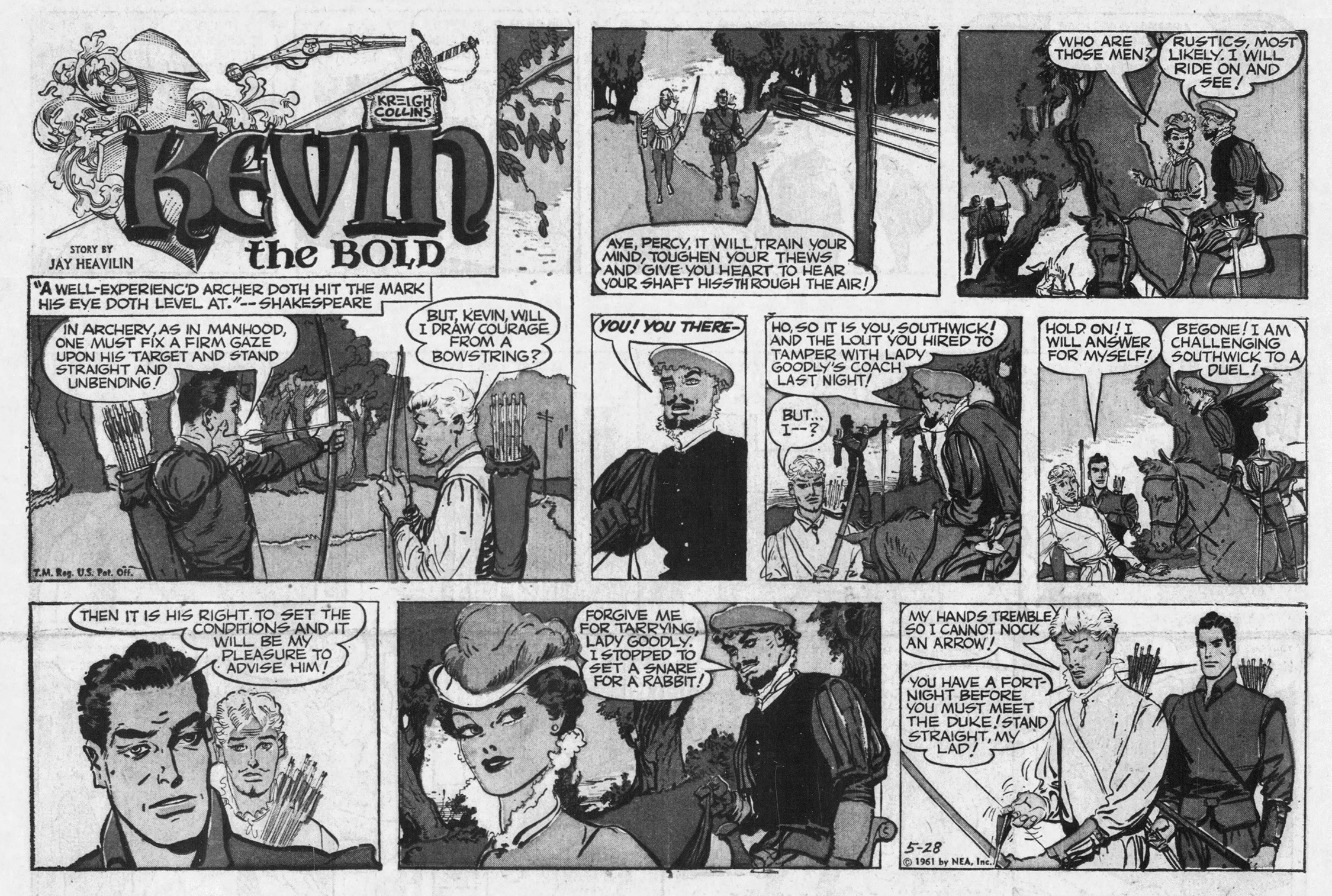 As the battle intensifies and the zaniness builds, the story arc reaches its conclusion. Here, “having sport with cheeses” means knocking the fire brigade from the rigging.

The only way this could be better was if it was flaming cheese (a Detroit favorite).

An interesting detail in the April 23, 1961 episode above is how the strip’s logo is partially obscured  by Grommet’s monstrous ship. By the next Sunday’s comic, the old logo will have disappeared, replaced by a new one, and accompanied by the byline, “Story by Jay Heavilin.” While this new chapter carries over a couple of characters from the one that preceded it, the tone of the comic strip’s narrative changes.

After begging her father to accompany Kevin to England, Elsa and her mother set off on the journey across the North Sea with him. Allowing his wife and daughter to make the crossing in Kevin’s small boat—Kevin obviously made quite an impression Mr. Van Loo.

The new logo was enlarged slightly for the May 7, 1961 episode, below, and looks great—its proportions work quite nicely with the amount of vertical space provided by a single tier of panels. A taller logo meant it took up more real estate horizontally, and apparently Collins didn’t like the tradeoff. As far as I can tell, the logo would always appear at the smaller size going forward.

While the next two story arcs contain overlapping characters, there is a pretty significant difference between them. The first sequence has only Kreigh Collins’ byline, whereas the one that follows is the first to carry the additional credit, “Story by Jay Heavilin.”

Sadly, I do not have color half pages for any of the comics, third-page versions seem most common for “Kevin the Bold” at this point in its run. Instead, I will post black and white half-page versions (usually syndicate proofs, with occasional BW downloads from newspapers.com), and supplement them with color third-page versions at the end.

The January 29, 1961 episode, below, is the transitionary episode at the end of one of my favorite sequences, featuring “Hercules.” That story arc ran previously. This sequence references the  then-current competition between Spain and England for trade—here, a fearsome weapon is being imported from Constantinople by a traitorous Dutch mercenary, which the Spaniards hope will give them the upper hand.

The English spy has stowed away by climbing into an empty barrel, a plot device Collins used by Moya McCoy in his strip’s opening sequence. 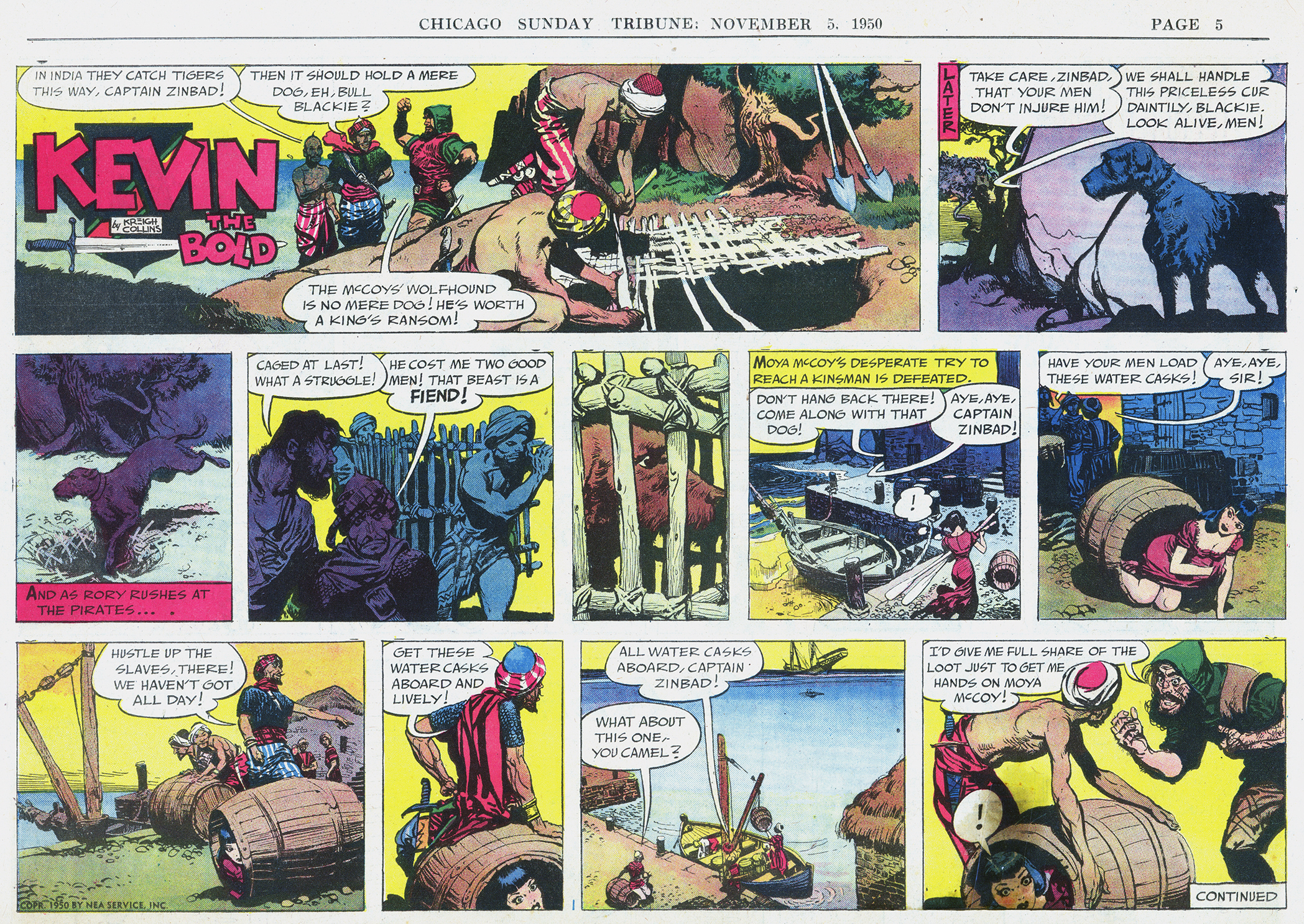 The next two episodes are ones for which I don’t have great examples. (And that hiding in the barrel ploy never seems to work).

Hans Grommet is certainly arrogant, and his cockiness is decidedly a flaw. As the action shifts to the Netherlands, new characters are introduced.

I don’t know who added the color—likely one of Kreigh’s grandchildren. I have vague memories of hanging out in my grandfather’s studio, after he had died, reading through stacks of printed comics, but what I remember are the NEA Daily and Sunday Comics publications, not proofs like the one festooned with watercolors above. At this point, my family lived in western New York state, and our trips to Ada, Michigan were sporadic. So I’m guessing either of my cousins Josh or Karen were serving as colorist. No matter, I’ve heard these adornments lend the episodes a certain charm.