Like other cartoonists, Kreigh Collins looked to his family and friends when it came to naming characters, but sometimes the comic strip characters’ names came first. “Kevin the Bold” debuted several months before Collins’ son Kevin was born, and Kevin’s ward Brett appeared about nine years before my brother made the scene.

I’ve always wondered what my uncle Glen (Kevin’s twin) thought of the title of his father’s best-known strip—at least two characters named Glen eventually appeared, but they didn’t have large rolls. And while Brett played a major part, I always thought it would be nice if  there was a character named Brian.

In a case of “be careful what you wish for,” eventually a Brian appeared—he was a misogynistic cad. Appearing a few years before I was born, It’s not like I was named for him, but couldn’t his name have been spelled with a “Y”? This guy is especially onerous.

A black-hearted rogue, indeed! (What is especially galling to me was that the Duke’s bad behavior was in the name of procuring a birthday gift, and this episode ran on my birthday). 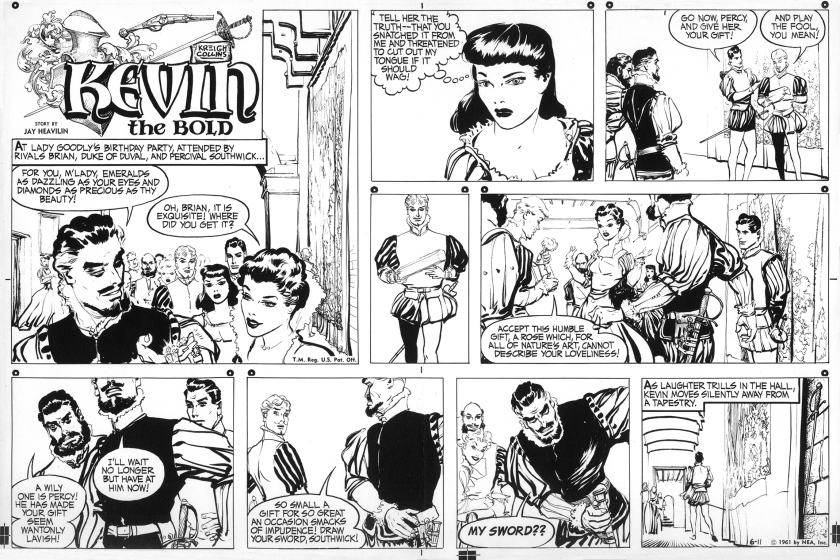 I guess I’m not the only one being overly sensitive, the Duke also seems a bit prickly.

Perhaps curious only to me, but in the two panels after the throwaway, the movement Kevin is making can only be described as “sidling.” Not commonly represented in comics—or anywhere, really—the only place I ever remember hearing the word is in this 1965 Johnny Cash A-side. A shame—it’s a great word!

Here are the first two episodes in color, as third-pages; I don’t have a color example from June 18, 1961.