The Moorish Pirates, part 3. With the aid of the Irish traitor Bull Blackie, Moorish pirates have been raiding the Irish coast, taking prisoners and selling them as slaves. Soon enough, the Pirates have scored quite a bounty. Despite fighting like wildcats (Moya) and dogs (Rory), all of our heroes have been captured — including Kevin. 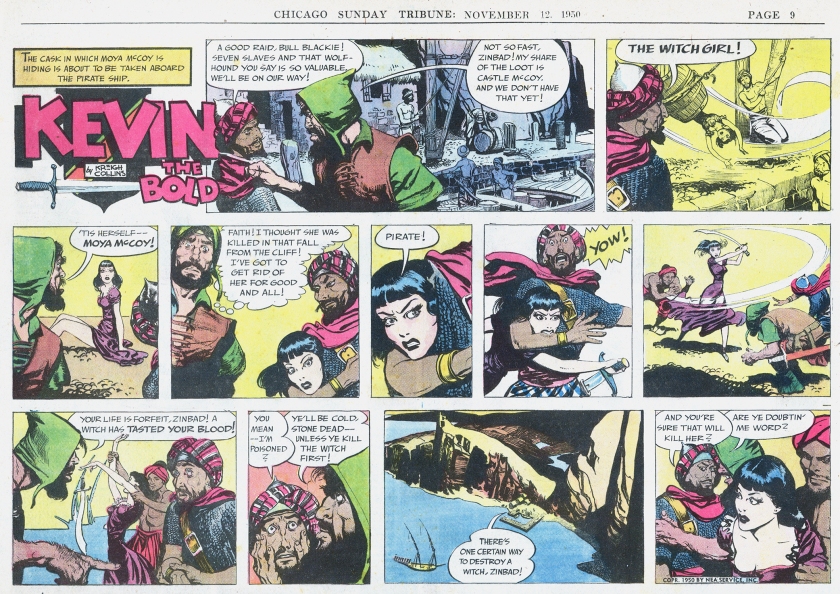 The double-decked opener of the November 19, 1950 comic provided the artwork for the promotional illustration that appeared in Tit-Bits, at top.

The pirates decide that as a witch, Moya must be killed (not the only time witch-killing was portrayed in the strip). However, they soon learn of Kevin’s creativity and fierce determination to save those in peril, especially those he loves.

The third “Kevin” comic introduces the Irish traitor Bull Blackie — and includes cross-dressing and fight scenes. In the fourth episode we meet Rory the Irish Wolfhound, and in the fifth we see Kevin attempt to single-handedly capture a pirate ship.

Of course, the comics also feature fantastic artwork. There’s a nice high-angle perspective of the pirates’ ship, Moya showing off as many of her charms as she’s allowed to on Sundays, and some beautifully-composed panels (such as the fifth panel of the October 29 comic — there’s quite a bit of information packed into that frame!) 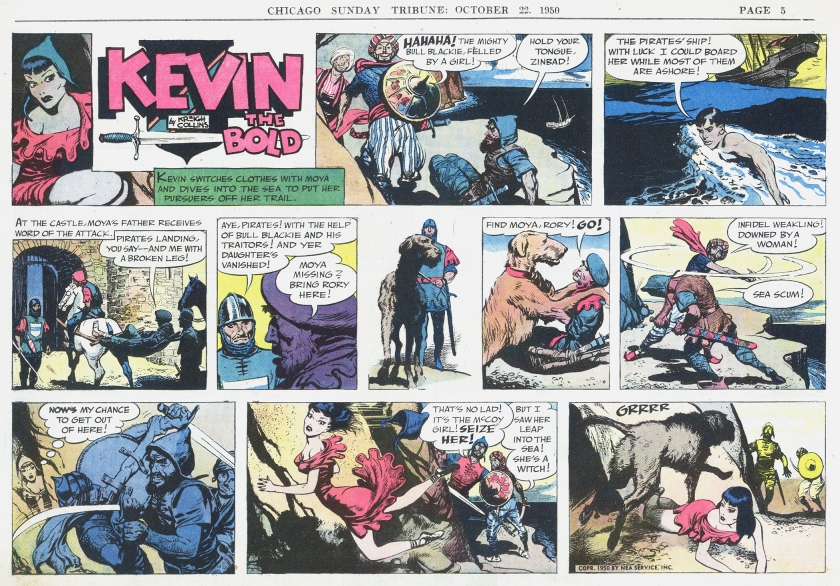 For now, everyone is safe, but based on the events of these first five comics, no doubt there is danger ahead.

The first “Kevin the Bold” sequence features all the classic elements for which the strip would become known — dramatic action, monstrous villains, damsels in distress, heroism… and gorgeous artwork.

Moya McCoy is the first character introduced; Kevin doesn’t appear until the second episode, when the two abruptly meet (or as it says in the comic, “Whoosh!”). 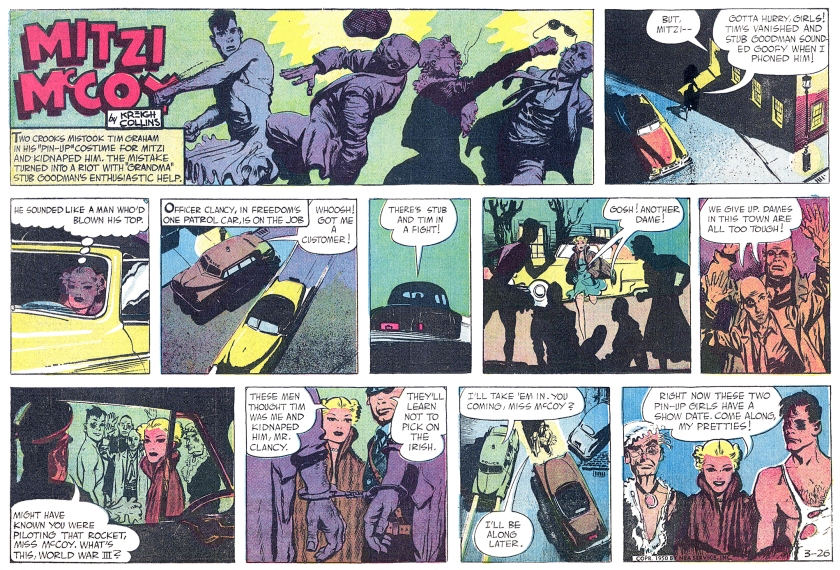 Tit-Bits (originally named Tit-Bits from all the interesting Books, Periodicals, and Newspapers of the World) was a British weekly magazine with origins in the late 19th century. (It also makes for a blog post title that might come up in more internet searches than usual).

The publication’s emphasis was on dramatic human interest stories. An Argentinian version was created in 1909, and among other things, it featured American comics translated into Spanish.

In the 1950s, many of the comics it ran were King Features titles (“The Phantom,” “Judge Parker,” “Rex Morgan MD,” etc.) but it also ran “Terry and the Pirates” (the Chicago Tribune Syndicate, renamed “La Sombra”) and “Kevin the Bold” (Newspaper Enterprise Association/“Kevin el Denodado”), among others.

The Tit-Bits covers repurposed art from its variety of source material, and frequently used comics. “Kevin” was featured — generally in cases when it had dramatic double-decked illustrations. (Covers are shown with corresponding original Sunday comics). 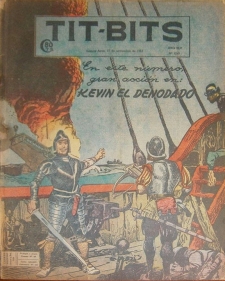 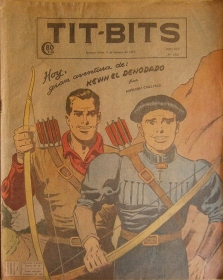 Looking at the five originals above, I’m reminded of other comics where Collins used similar devices or poses. The first two have echoes of throwaway panels from some of the earliest KTBs.

At left, an earlier drowning victim (December 3, 1950). At far right, from the KTB debut strip,  Moya McCoy displays similar form to the damsel in the red dress.

Based on the publication dates of the Argentine monthlies (and the dates the comics originally ran), I’d speculate that each issue would contain four to six episodes of any given comic. The comics ran in a tabloid format, but in a much smaller size, with other stories wrapping around them on the pages.

Though many are currently listed on eBay, I haven’t seen any physical copies of these publications — the shipping costs put them out of my price range. However, I did spring for a rather unique full-page illustration from Tit-Bits. It shows a trussed up Moya McCoy, as she is being kidnapped by Moors. The artwork is from KTB’s opening sequence, and I will begin running that chapter in four installments starting next Sunday.

Nothing to see here — just a little pre-Code bondage!