The last two comics of this sequence are humorous affairs that, unlike the majority of “Mitzi McCoy” episodes, can stand alone. Grouped with the previous five, they help better describe the goings on in the little town of Freedom and flesh out the characters that live there.

The June 19 comic reveals a bunch of sailing terminology, most of which I was familiar with, having grown up on boats. One term was new to me, yet sounded familiar. What are “the Henty Books?” A quick google search revealed the answer, as well as a short nsfw distraction when I misspelled the term. You have to be careful with those google searches! 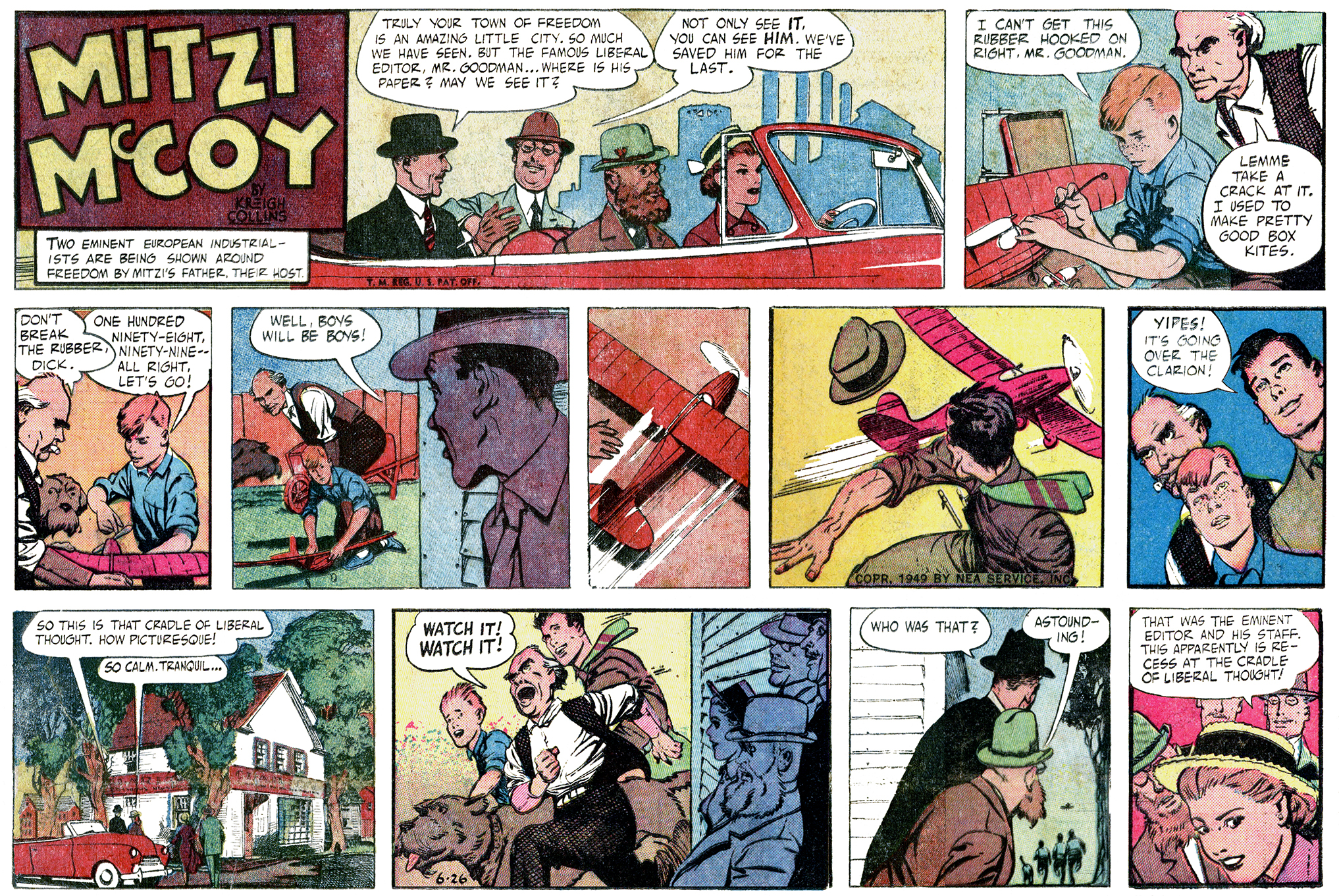 The June 26, 1949 episode, above, is one of a handful of “Mitzis” for which I don’t have a half-page or tabloid version. Luckily, I was provided with a half-page version by Frank Young, the comics historian who wrote the fine introduction to my recent Mitzi McCoy book.

The action revolves around the model plane Dick Dixon built, and with which Stub is dying to lend a hand. Model building was a frequent pastime in Kreigh Collins’ household (both boats and planes), and the Stub’s comment about box kites is likely autobiographical.

Here’s my father, Eric, with his model plane. My dad modeled for Dick Dixon, and this photo was taken at approximately the same time the episode above was being developed. Around the time I was this age, I recall my father still goofing around with gasoline-powered model airplanes in our back yard. 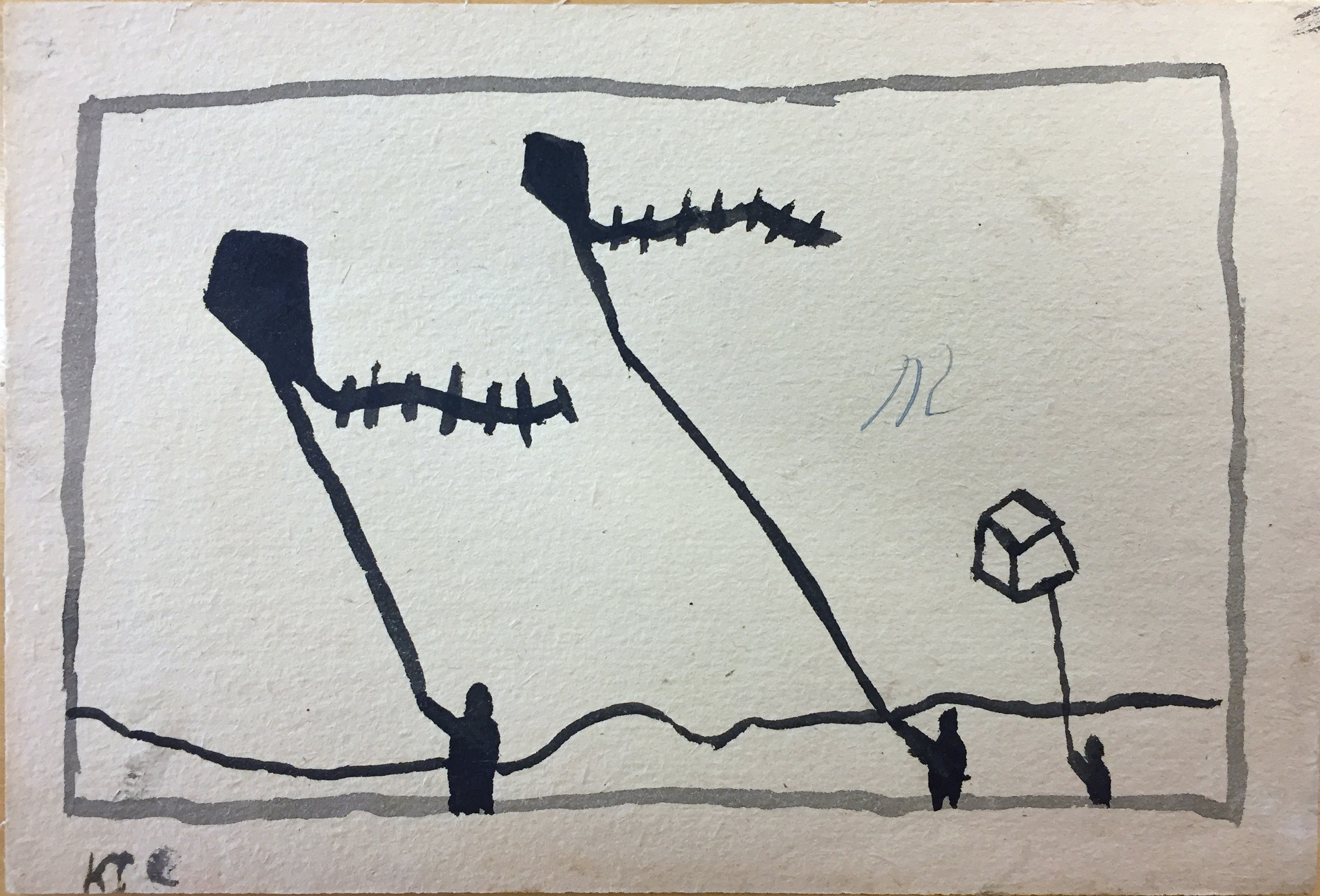 In this childhood water color of Kreigh’s, I assumed it shows his father at left, with his mother and Kreigh (with a box kite) to the right.

To read the complete run of “Mitzi McCoy” comics, The Lost Art of Kreigh Collins, Vol. 1: The Complete Mitzi McCoy can be found here; it’s still available at its pre-order price of $24.95.

What was that noise in the attic?

Suspense yields to hard-boiled interrogation, and soon enough, the perpetrator cracks. It it is revealed that Dick Dixon’s family lives in Grand Rapids (Michigan), which is a short drive away from the town “Mitzi” is set in (Freedom), as well as from Kreigh Collins’ actual home, in Ada.

Having made a work arrangement with Mr. Dixon, Stub welcomes Dick back into his home (above the offices of the Freedom Clarion). Shortly, Stub puts his new employee to work.

The June 12, 1949 comic is perhaps my favorite episode of “Mitzi McCoy.” Despite lacking a single appearance of the strip’s namesake, it has plenty of color and lovely illustrations—several of which feature strikingly pretty women situated prominently in panels 4, 7, 8, and 9. As Dick rattles off a startling amount of boating knowledge (for which Collins likely needed no research), Tim is taken aback and shoots a fourth wall-breaking look at the reader. The episode also references an upcoming “Mitzi” sequence—Dick will meet his hero Notty Pine under unusual circumstances in an episode eight weeks hence. Here, Stub has furnished a wonderful room for the lad. Note the decor: snow shoes, boxing gloves, hockey stick, rifle, books, a radio—and a sailboat model. Kreigh Collins had many outdoor interests, but none that he was more passionate about than boating.

Most of my grandfather’s boats are shown below. He started small, but as he prospered in his career, his boats followed suit. As a newlywed, Kreigh had a small powerboat, and by the mid-’30s, he owned his first daysailer, a catboat christened “Stub” (a name he was fond of). Around 1950, he was given a 19′ Lightning by his syndicate (NEA)—possibly a bonus for the successful launch of “Kevin the Bold.” In 1952, Collins purchased a 28′ yawl formerly berthed across the “big lake” in Racine, Wisconsin; three years later he upgraded again with Heather, a 45′ schooner. Heather was the boat on which Collins traveled extensively with his family—through most of the Great Lakes, Lake Huron’s North Channel, the Mississippi River, the Gulf of Mexico, the Atlantic Ocean, the Intracoastal Waterway, the Hudson River, the Erie Canal, and as far north as Maine.

Seeing “Mitzi McCoy” go back into print last year made me proud, as the comic strip is an overlooked gem in my (admittedly biased) opinion. This early sequence effectively distills its essence. At this point, the strip’s main characters are still being fleshed out, and lesser ones are slowly being introduced. Tim and Mitzi have just saved Mr. McCoy a bundle of money, and Freedom Clarion editor Stub Goodman worries that he could lose his trusted (and only) employee, Tim, to Mitzi’s father.

In a sweet third panel, Stub describes how proud he is of his newspaper (to his Irish wolfhound, Tiny), and reveals how much he loves his job. Reading through these comics, part of the fun is looking up obscure references (Samarkand?), and the penultimate panel is an exercise in understated beauty.

While the mood of the first episode was heart-warming, things darken a bit as we meet Sgt. Douma, a recurring character. Something’s afoot, and it could be dangerous.

These comics appeared as half pages in the Indianapolis Times and continue over the next two weeks.

Only 5-1/4″ wide by 7″ tall, Thriller Comics No. 24 is smaller than other Australian edition comic books I’ve seen (below)—they have a trim size of 6-3/4″ x 10″. But as MacTavish Campbell MacGregor (shown training with Kevin on the cover) would be the first to tell you, sometimes big things come in small packages.

Thriller Comics No. 24 was printed in London, England c. 1951, and marketed in Australia. The cover lists its price as “1’–” which I’ve just learned is one shilling (thank you to my wife’s Australian cousin Lorrie!). It contains two classic early sequences, “The Count de Falcon” and “The Search for Sadea;” combined, they ran over a period of 33 weeks. These 33 episodes are split into five chapters and jammed into 59 pages. I say “jammed” because the comics are abridged—as many as three of the original panels are excised from each episode (not even including the throwaway panels!). In some cases, the panels’ order is changed as well, in an attempt to help streamline the flow of action.

The final three spreads of the comic book feature a Robin Hood comic by an unknown artist (Kreigh Collins isn’t credited for “Kevin,” either), leaving me to wish the comic book editors hadn’t bothered with Robin and had ran the “Kevin” episodes in their entirety.

This is a very minor nit to pick, as the Thriller Comics No. 24 is awesome. My copy is kind of fragile — I didn’t want to damage it by flattening it in my scanner, so I took some quick photos of it with my phone. Here is Chapter 1. 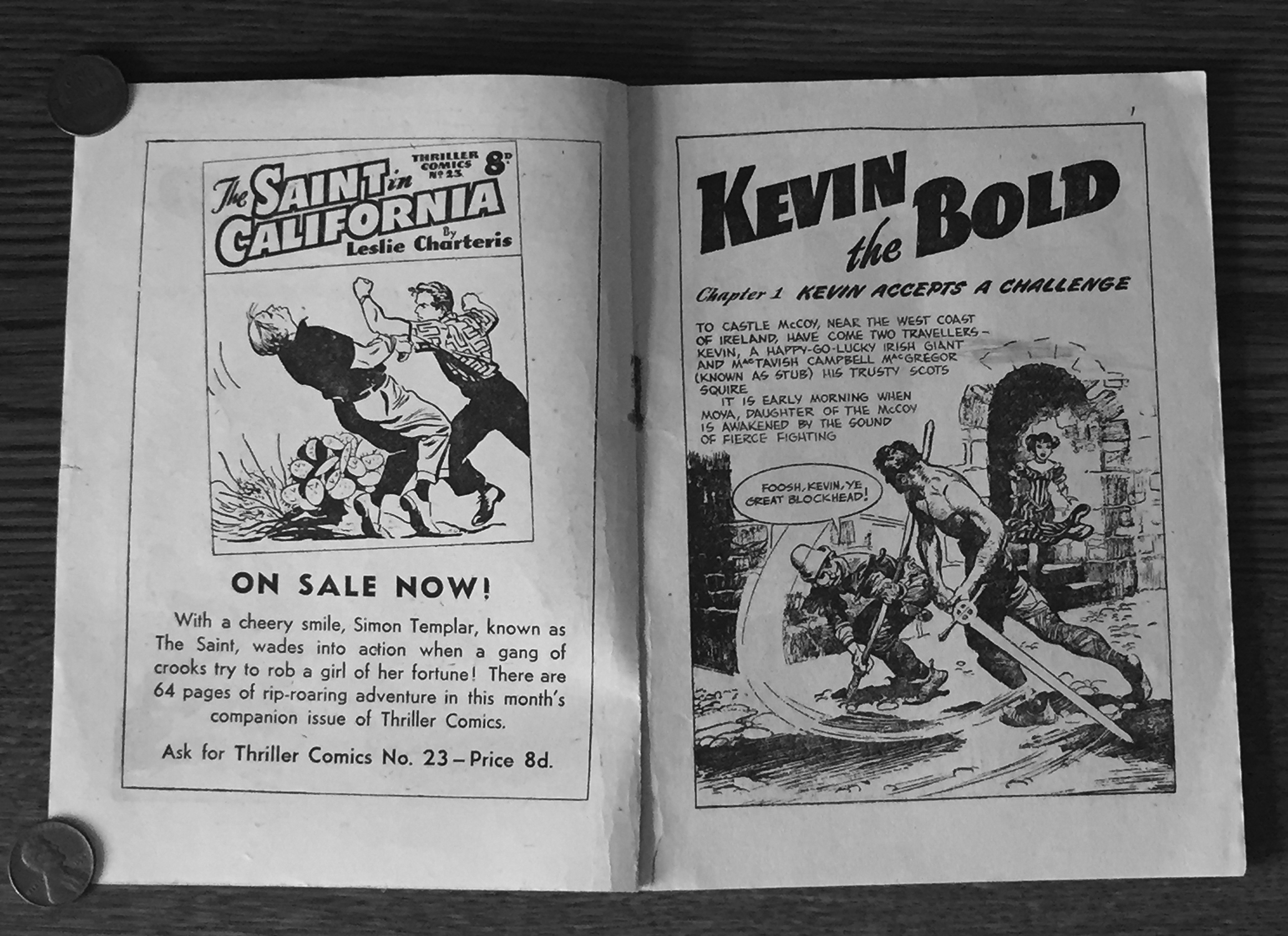 (If these photographs aren’t satisfying, the sequence’s original, color Sunday comics can be seen here). The story continues with chapter two…

Here’s Chapter 3, which I call “The Search for Sadea,” and whose original comics  can be seen here.

And the conclusion, Chapter 5. An avid sailor, my grandfather clearly loved drawing boats of any size in his comics. In addition to “Kevin the Bold,” boats were featured frequently in both “Mitzi McCoy” and “Up Anchor!”

In October, 1965, near the end of the line for “Kevin the Bold,” Kreigh Collins also used Robin Hood in a plot. Here is another cartoonist’s take on Robin.

And finally, the back cover.