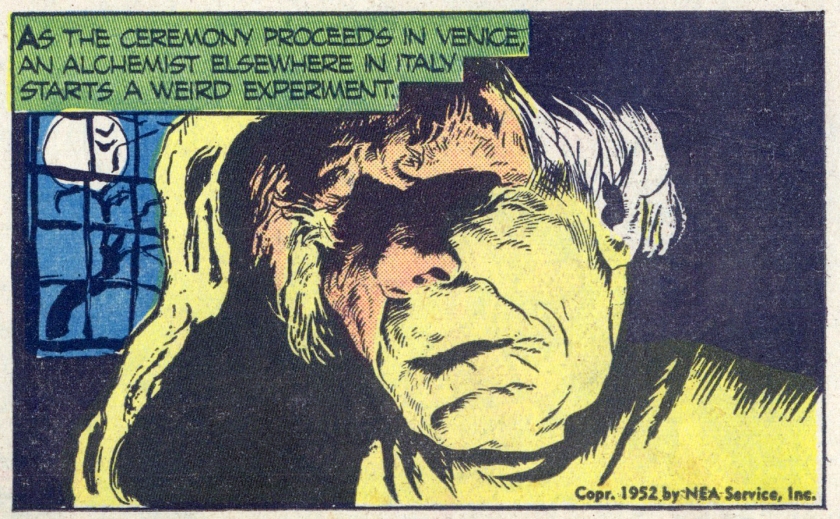 In the ninth sequence of “Kevin the Bold,” some new characters are introduced. Kevin and Brett meet Dr. Claustus, an alchemist, and Lora, his granddaughter. Calib (a thug from the nearby Castle) is the villain, and Leonardo da Vinci has a cameo appearance. Da Vinci will reappear in the following sequence (and again in 1967, near the end of the comic strip’s long run).

When in need, Dr. Claustus is the type of brilliant man people seek out to solve problems. However, he is mistrusted by others. After a couple of scene-setting comics, the characters become entwined, and the drama starts.

In recognition of one year of posting the comics of Kreigh Collins, we will celebrate traditionally.

Among other papers, “Mitzi McCoy” initially appeared in its beautiful half-page format in the Pittsburgh Press and the Indianapolis Times. Tabloid newspapers, such as the New York Mirror, ran the comic as tabs or half-tabs. In some dailies, such as the Grand Rapids Press, it appeared in black and white.

Famously appearing from its onset in the prestigious Chicago Sunday Tribune,  “Kevin the Bold” also ran in the Detroit News and other papers. As the Pittsburgh Press had done with “Mitzi,” the Florida Times-Union used “Kevin” to lead off its comic section.

My collection of comics largely consists of my grandfather’s original samples. They are mostly from the Chicago Tribune and the Detroit News. There are sometimes multiple versions of a particular Sunday, from different papers, in different formats. Entire comic sections are occasionally found, often from newspapers of places Kreigh visited during journeys aboard his schooner Heather.

The inclusion of one of these comic sections always piqued my curiosity. It’s a Tribune section dated December 27, 1959. “Kevin the Bold” is nowhere to be found.  Only recently did I realize the significance — in what must have been a devastating blow to the artist, it marked the point when the Tribune dropped the strip after carrying it for a decade. Notably, “Kevin” does appear in another intact section from the same day’s Detroit News.

With Selim crippled by a broken leg, Kevin sets off for the treasure alone. Rog hopes Kevin will do the dirty work for him. 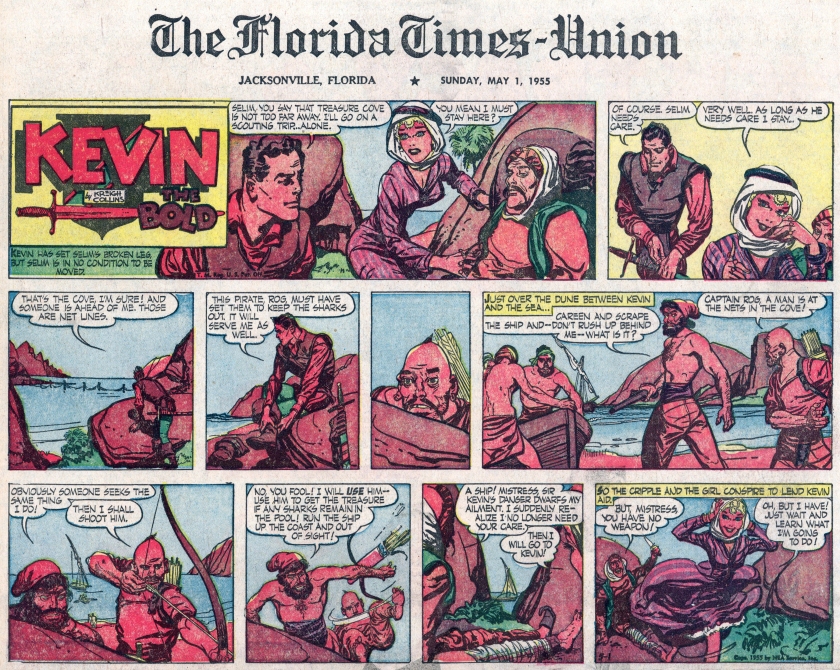 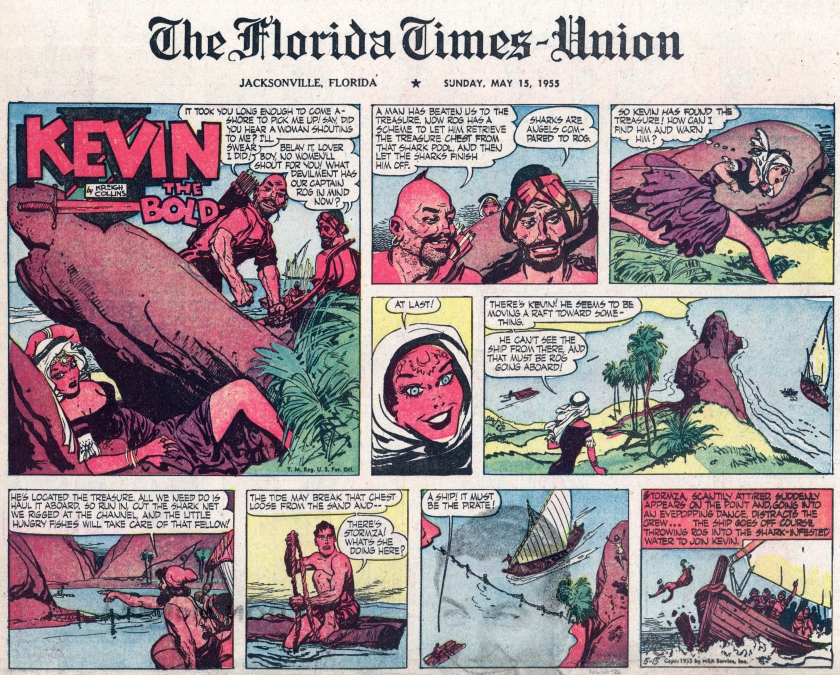 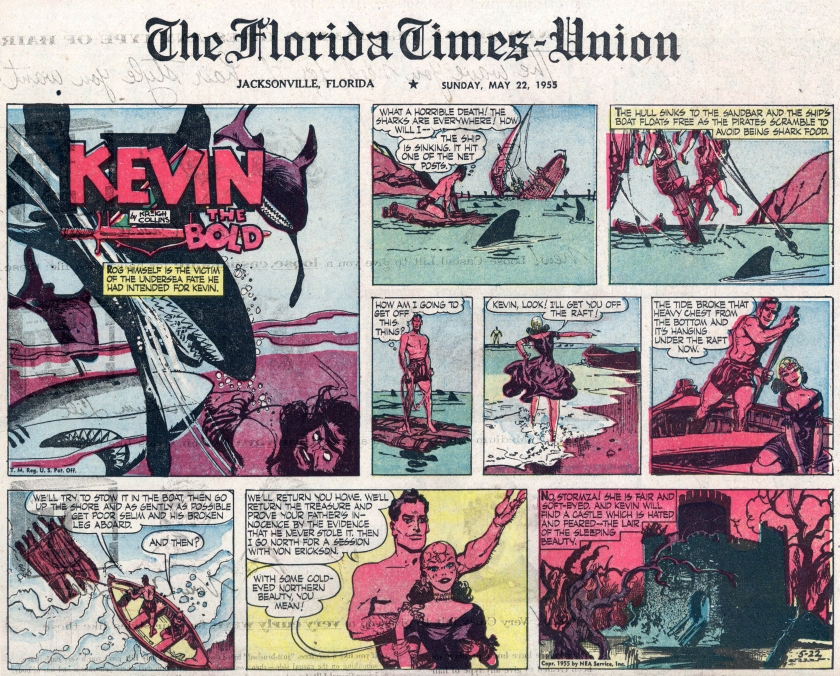 The sequence wraps quickly as Stormza comes to Kevin’s rescue. Though the beautiful Stormza has just saved him, as is his way, Kevin declines her overtures and sets off, alone, for new adventures.

Their sea journey over, the group now travels across the desert with Stormza continuing to cause trouble due to her rebellious nature. In search of lost treasure, Kevin and Selim discover that they aren’t the only ones trying to recover it, and a new villain is introduced.

Before facing the Rog, Kevin has a close call with some locals and is saved by a wise and kindly old Arab sheik. It is an interesting to see how Arabs are portrayed in this 60-year-old comic. The sheik and his men become Kevin’s allies as they prepare to face Rog, the villainous European. 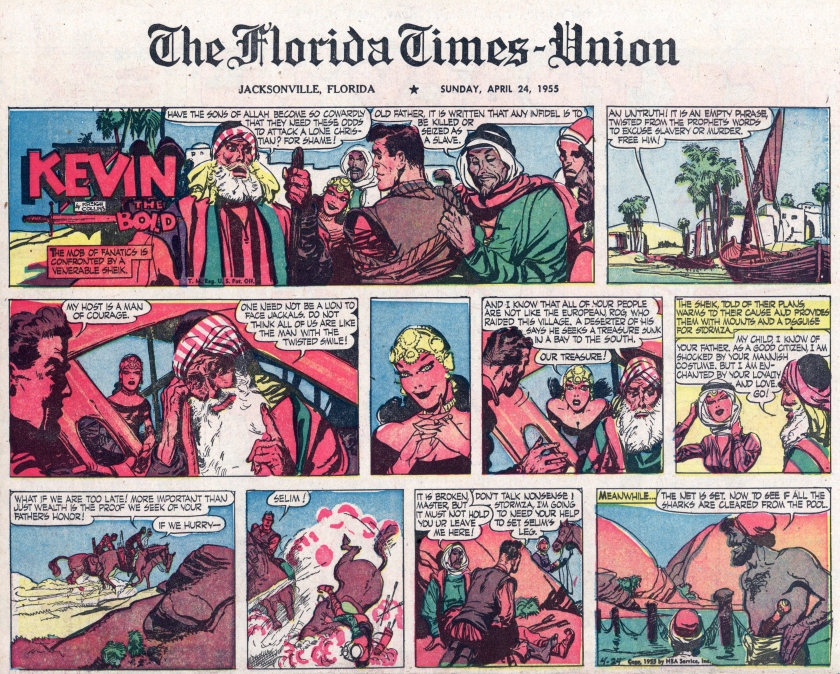