This summer, I received a comic book in the mail. Although I had never met the sender, he knew exactly what I’d like—a Danish “Kevin the Bold” comic book. It is Serie Magasinet Solo Number 23. with “Solo” possibly indicates there are only Kevin hin Frygtløse (“The Fearless”) comics inside. It’s quite robust—68 pages with no ad pages at all.

I’d seen (and copied) an image of the cover online somewhere years ago, but to hold an actual copy was wonderful. They didn’t skimp on the ink when they printed the cover. The palette of colors used is almost completely saturated: 100% cyan, 100% magenta, 100% yellow, and a blend of 100% cyan and 100% magenta to create a nice dark purple, and a similar magenta-yellow blend for bright red. The skin tones are the only place half-tone dots are used.

A copyright line inside indicates it was published in 1974, which means it came out at about the same time the Menomonee Falls Gazette also began reprinting “Kevin the Bold.” (A small amount of material overlaps the two publications’ efforts). The 66 individual comics it features make up five complete story arcs—all of the 1954 “Kevin the Bold” Sunday comics plus another 15 from 1955. The first story, “The Island of Death,” appears below.

The action begins abruptly—the introductory comic in the sequence was skipped. To help explain what’s happening, here is the December 27, 1953 Sunday comic. 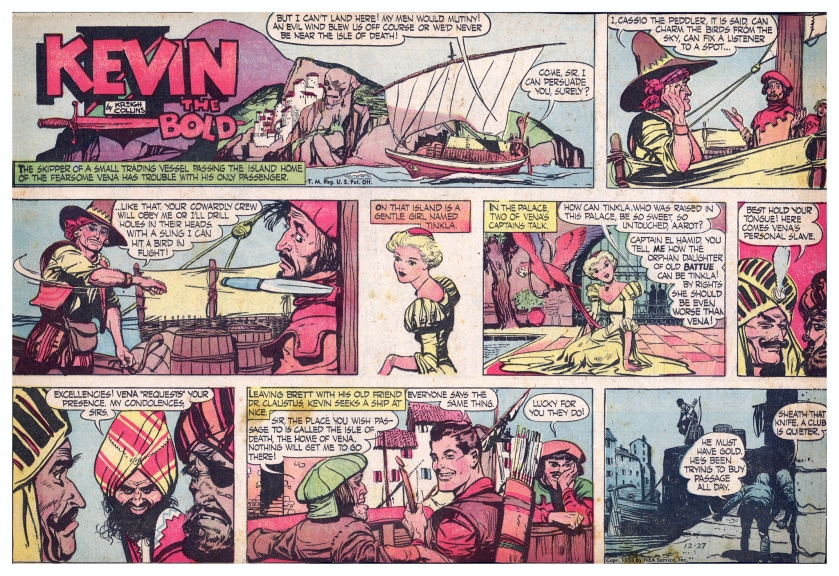 Inside the comic book, the action picks up. Although I can’t read Danish, the sequence has some lovely illustrations. As usual, the comic book was put together using original tabloid pages, but to avoid the repeating the comic strip’s logo on each page, it was simply cropped out. The results were usually fine, but there does tend to be a bit of dead space in the upper right corners of several of the comics. 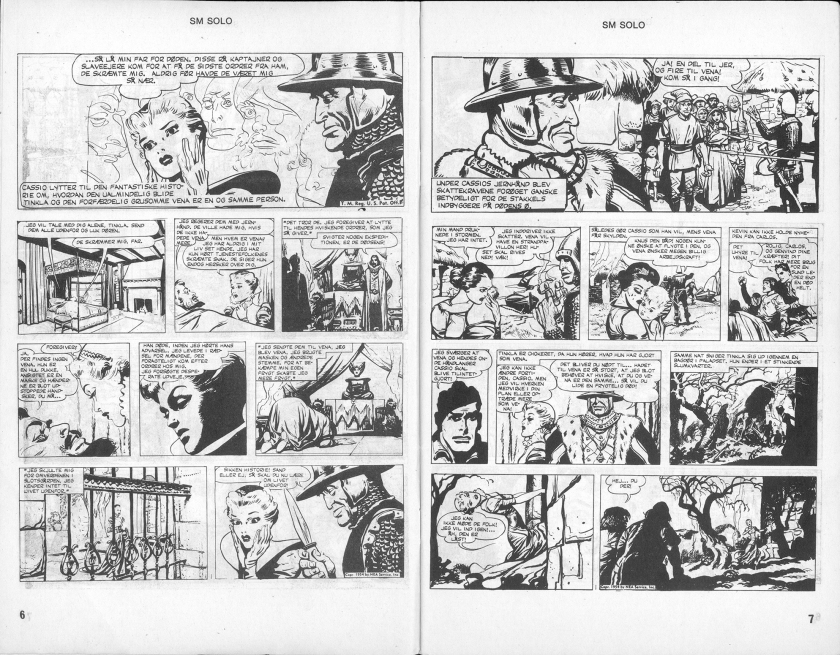 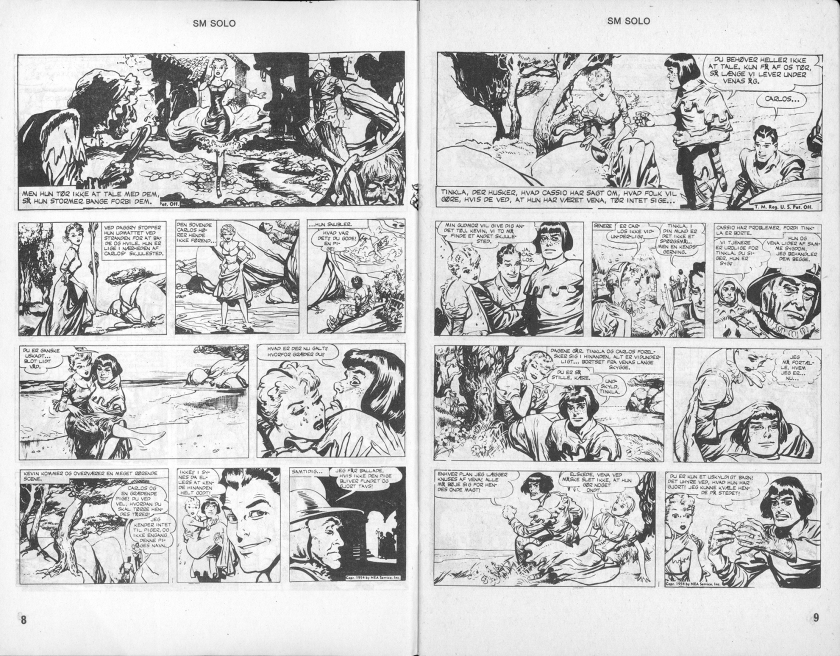 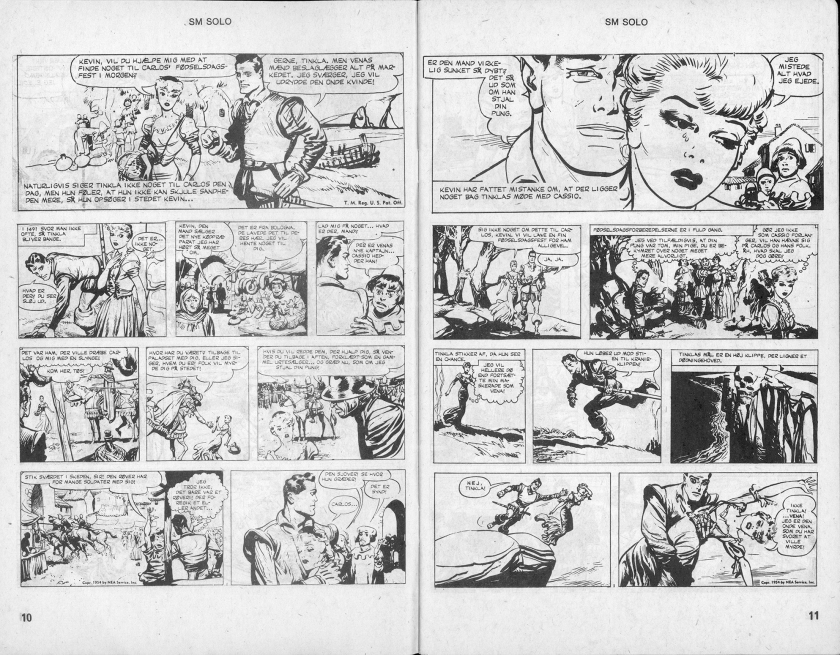 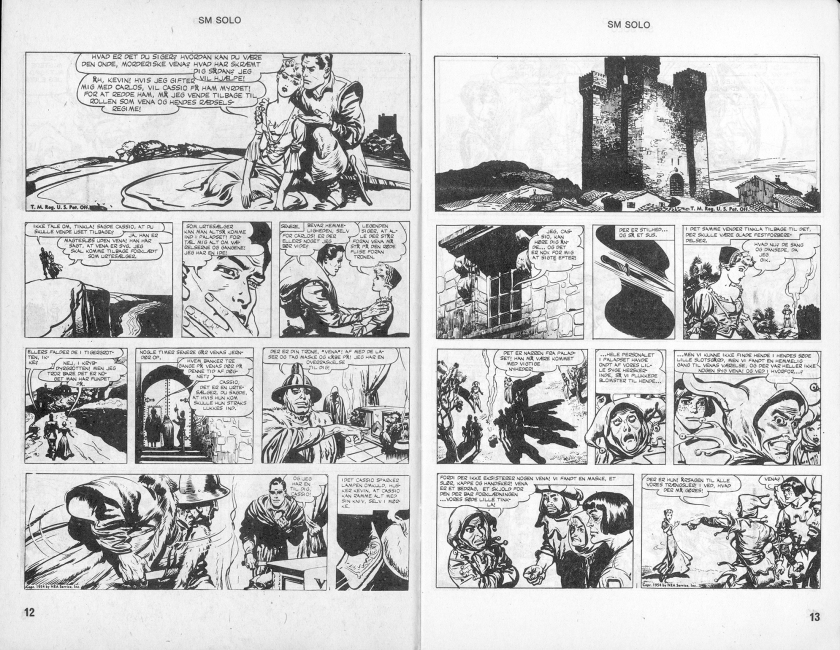 On page 14, the episode transitions to the next story arc. It features a beggar character, Toto, that would reappear in Kevin’s later adventures.

The back cover reproduces a beautiful splash panel and has some expository text.

It’s a nice synopsis of “Kevin.” With assistance from an online translator, it reads:

In this issue of SM solo, I have the pleasure of presenting Kevin the Bold, or Kevin the Fearless, as he has been called in Danish. Unfortunately, it has not been possible for me to write an article about the series, as I know quite a bit about it and have not been able to find any information about it anywhere.

It is an American comic strip that was founded by Kreigh Collins from around 1949. It was only drawn for Sunday papers, so there are no dailies.

The story is about a young Irish man, Kevin. When he was a little boy, Ireland was invaded by pirates who robbed and burned large areas. Kevin, an orphan, was found by a Scottish soldier, MacTavish Campbell [MacGregor] who took him in as his son and raised him. At the age of 15, Kevin received an amulet from MacTavish, an amulet that Kevin had been wearing when he was found, and maybe one day it could lead him on the trail of his true family’s name.

He has experienced a lot and fought a lot. As a soldier, he became known for his boldness in battle, and since then he has been all over Europe in his quest for adventure. It is a very lively and exciting series that in many ways can be compared to Prince Valiant. Enjoy.

Asger, my friend who sent me the Danish comic book, had heard about my efforts to publish the “Lost Art of Kreigh Collins, Volume 1: Mitzi McCoy.” He and some friends have been working on a similar project—reprinting the great Danish adventure strip “Willy På Eventyr” (“Willie’s Adventures”). So far, four volumes have been published (about 250 pages each), and Vol. 5 is due out next year. Information can be found at their web site: www.willy-centret.dk

A recent trip to Iceland inspired me to run the accompanying “Dragon Ship” sequence, set in Norway. I’ll vouch for the coldness of the North Atlantic (though I was not “bold” enough to wade in deeper than my ankles).

The illustration of underwater swimming in the final panel is evocative of a decade-old Mitzi McCoy comic and plot device, that of finding a hidden cave with an air pocket.

As in the mid-1949 Mitzi McCoy sequence, a cave is found with an air pocket. It allows Kevin to escape the frigid water, albeit briefly. Meanwhile, as Thord’s men squabble, Kevin seizes his opportunity.

Besides being a rather gruesome conclusion to a compelling storyline, the August 31, 1958 episode is notable for a couple of other reasons, among them a continuity problem. When Thord and Kevin resurface in the second panel, some stones are visible in the foreground, to Thord’s right. In the next panel, Thord gives Kevin a stiff-arm as he lunges for the stones to his left. The throwaway panel then shows a closeup of a stone in Thord’s left hand, but the following panel shows the stone in Thord’s right hand, as he’s about to strike at Kevin.

Also of note is the introduction of the character Pedro in the final transitional panels. A large and recurring character, Pedro was by Kevin’s side for many of his adventures over the final decade of Kevin the Bold’s run. No doubt he was a favorite of Collins, as a very similar Pedro character played a prominent role in Kreigh Collins’ third and final NEA feature, Up Anchor!

Fulfillment of book orders should start by early next week. My apologies for the publisher’s delay in shipping books that have been ordered.

That said, the book (The Lost Art of Kreigh Collins, Vol. 1: The Complete Mitzi McCoy) can be found at the Lost Art Books website, and the last time I checked, it was still available for its reduced, pre-order sale price. In addition to the entire run of “Mitzi McCoy,” the book includes the opening sequence of the comic strip “Mitzi” evolved into, “Kevin the Bold.”

Freshly awoken from being knocked out, Kevin and Freya race to water’s edge only to see Thord sailing away on Sor Nordick’s dragon boat, repurposed as the Erl’s funeral ship.

After discovering that Thord intended to steal the venerable old man’s treasure (instead of following custom and letting it sink with the burning boat), Kevin and Freya set off in an attempt to thward Thord’s plans.

[Now about those “unscrupulous” Jesicks. Reading through these comics, that name rang a bell for me, and I realized where it likely came from. Notably, Kreigh Collins was an avid sailor, and for many years he docked his boat at a marina on Lake Macatawa, Michigan. The marina? Jesick’s Boat Yard. I suspect that the choice of names Collins gave to Thord’s lackeys was in fun, and not indicative of any malice toward the owners of his longtime marina. It sounds Polish to me, but perhaps Jesick is a Norwegian name?] 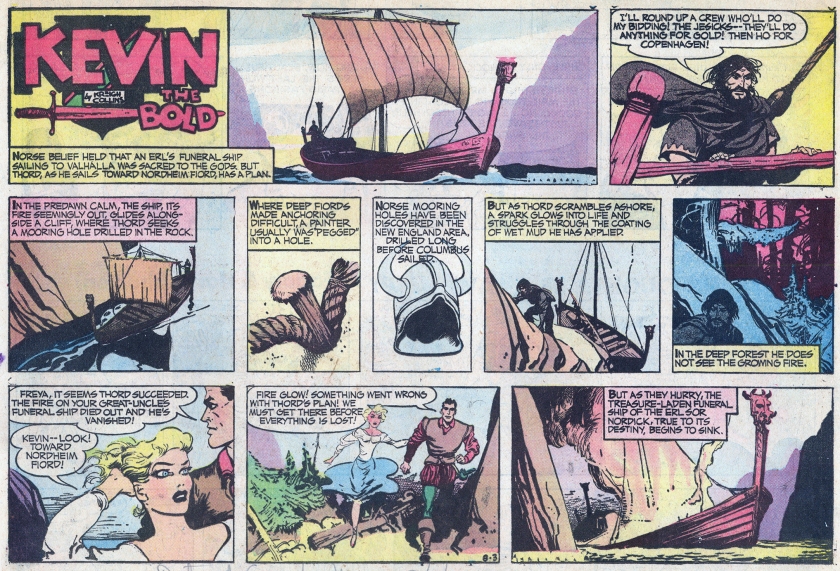 An unforeseen bugaboo in the evil man’s plans dooms them, but while Kevin strides off to for a better view,  Freya herself is not out of the woods yet. 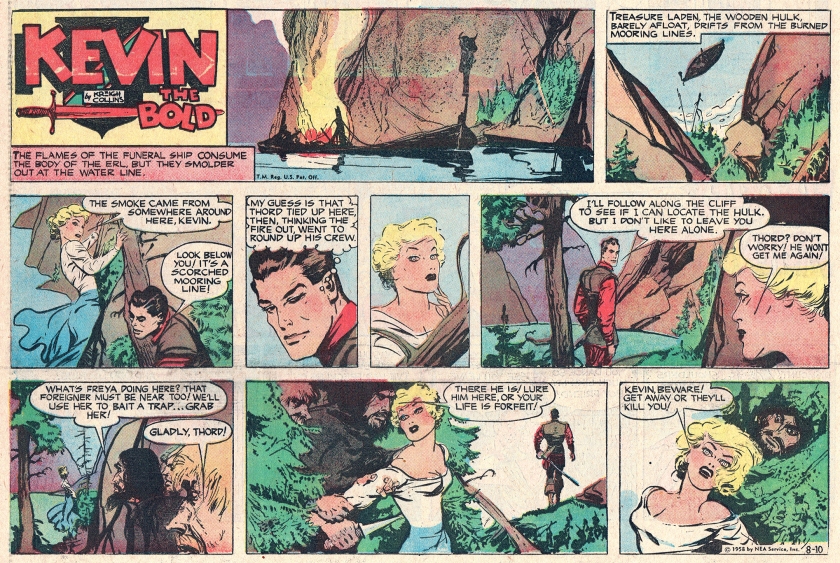 Smelling a rat, Kevin lingers to see what sort of plan is afoot. Thord quickly schemes to get Kevin out of his way, but as usual, the Irishman is one step ahead of his foe.

Pretending he has passed out from too much drink, Kevin leaps at an opportunity to search for Freya. Bound and vulnerable, Freya doesn’t know who her rescuer is, but she appears to like what she sees. Kevin hastens her away in the nick of time. Thord, with the menacing prow of the dragon ship looming over his shoulder, sets off to grab Freya.

Instead, he finds Kevin, and becomes enraged. Luckily, Freya is not only beautiful, but quick thinking and surprisingly strong.

The July 20 episode is one of a few from 1958 for which I don’t have a half-page example. I’m fortunate to have a crisp black and white proof, and it reveals all the cropping that took place when one-third-page versions were created. Some nice details are lost, such as the fuller illustration of the house in the final panel, but the comparison also shows that Kreigh Collins had learned to deal with the inevitability of the third-pages. Several of the wider panels’ sides are rather empty, and ready to be sacrificed for the truncated version. Interestingly, the penultimate panel has been extended upward, with the caption moving up and over, so the overall width can be reduced without obscuring the fetching Freya’s face. 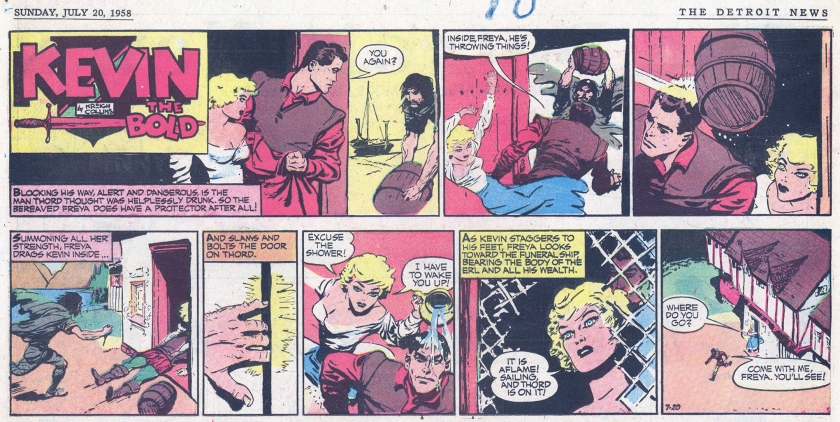 Visit the Lost Art Books website to place your order for The Lost Art of Kreigh Collins, Vol. 1: The Complete Mitzi McCoy. In addition to the entire run of “Mitzi McCoy,” the book includes the opening sequence of the comic strip “Mitzi” evolved into, “Kevin the Bold.”