Things seems bad for Kevin when he sees how heavily Stormza travels. The situation deteriorates as the weather worsens. 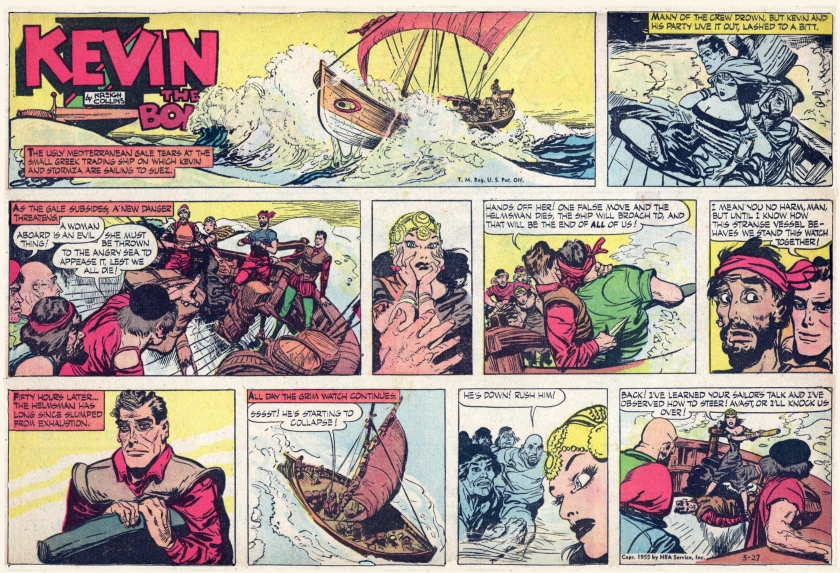 Nearing exhaustion and dealing with a mutinous crew, Kevin has an unlikely rescuer. Once he comes to, he learns that his mission is about to become even trickier.

In 2004, I acquired my first “Kevin the Bold” comics. I purchased two years of Florida Times-Union half-pages from a woman whose husband had died. The comics were inexpensive, and I later realized that they were rather poor-quality examples. The colors printed rather garishly, there was a lot of show-through and other problems — but it was great having a two-year run of half-page comics.

The action was exciting and featured exotic, nicely-rendered  locales. In the following sequence, rooted in the history of the Hanseatic League, Kevin’s patron wants to find a trade route through the Suez. In order to gain the trust of the powers that be, he has enlisted Kevin to deliver a “priceless jewel” — the Pasha’s daughter has to get home after spending time in Europe. Kevin soon realizes how difficult his assignment will be.

Stormza is perhaps Collins’s most headstrong female character since Mitzi McCoy, and like Mitzi, she has a knack for getting into — and out of — trouble. 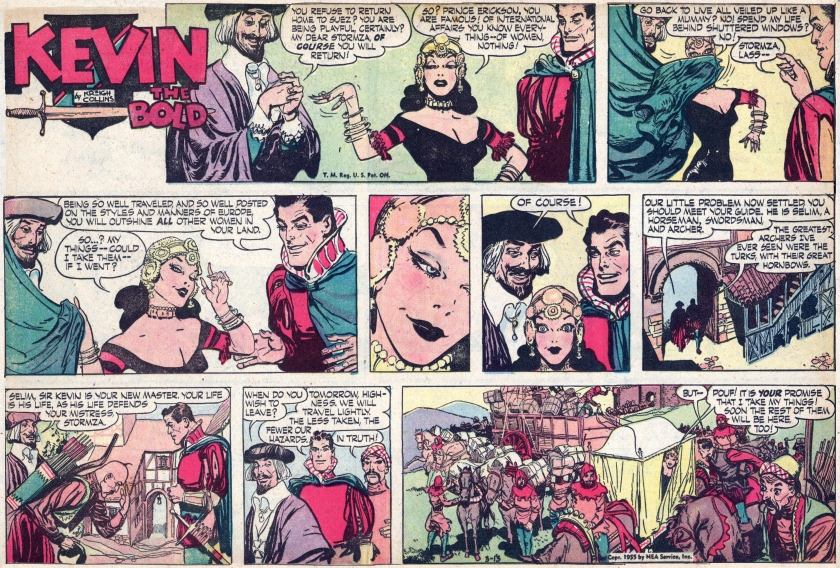 As usual, the transitional comics in the sequence feature light-hearted, humorous situations.

I started my professional career as a graphic designer in 1987. Like a lot of young people in the publishing industry, I was a big fan of Spy magazine. Spy was a satirical monthly that ran from 1986 to the mid-90s and was based in New York City, like me. There were plenty of interesting components of the magazine, among them “Separated at Birth.” It wasn’t a high-brow feature, and no doubt it’s been parodied to death.

Kreigh Collins often had characters that were inspired by ones from his previous comics. Occasionally ideas were recycled too, but these are examples of the former.

These examples might not be as elegant as those found in Spy, but they are still pretty interesting. Sometimes it wasn’t so much a recurring character as it was an object.

“Up Anchor!,” Kreigh’s final comic, was set aboard a representation of his own boat, the 45-foot long Heather. The Bowdoin didn’t feature in any of Kreigh’s comics, but the historic 88-foot long schooner was the design upon which the half-size Heather was based.

Uniquely designed for Arctic exploration, the Bowdoin was launched in 1921.Under the direction of skipper Donald B. MacMillan, it made dozens of trips above the Arctic Circle. Earlier, MacMillan had accompanied Robert Peary on his historic expedition to the North Pole in 1909.

Kreigh’s wife Theresa described how Heather came to be in the article she wrote, and which Kreigh illustrated, “The Wake of the Heather.”

When [Arctic] explorations were in the forefront of the news, a Chicago doctor wrote to the ship’s designer and asked him to design a half-sized schooner, built as she was and able to go anywhere and do anything. The doctor died two years after his boat was launched in 1927, and the superbly built schooner passed on to a succession of owners until we bought her twelve years ago. This is our Heather, little sister of the Bowdoin.

Kreigh and Teddy met MacMillan at Mystic Seaport in the summer of 1966. They had known of Heather’s parentage, and had sought out the Bowdoin. The 92-year-old MacMillan, a rear admiral in the Naval Reserve, invited the couple to dine with him and his wife aboard their boat.

Kreigh and his family sailed Heather for nearly 15 years, and she lived up to her go-anywhere, do-anything billing. Among the places they took her were all of the Great Lakes, the Erie Canal, the Hudson River, New York harbor, Long Island Sound, the Cape Cod Canal, Maine, the Bay of Fundy; and the Inter-coastal Waterway, Florida, the Gulf of Mexico and the Mississippi River. I’m not sure if they ever made it to the Bahamas, as a late-1950s newspaper article mentioned, but they certainly covered a lot of water.

Having come to the north woods to win a bet, Tim has found no time for bear hunting. It’s a good thing that he has been keeping his archery skills sharp, as he does finally get a chance to use his bow.

With the accuracy he had displayed twice before, Tim takes a 100-yard shot and pins Waboosh to a tree with an arrow seemingly straight through his heart. It’s grim stuff for the comic strip, but it turns out that Waboosh’s wound is not fatal. And just as the tension eases, Mr. McCoy is startled by another gun-toting local. 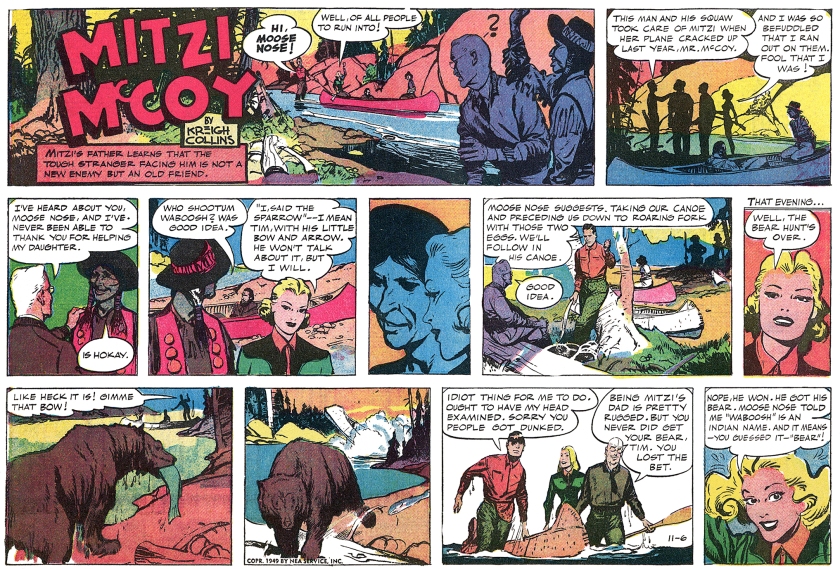 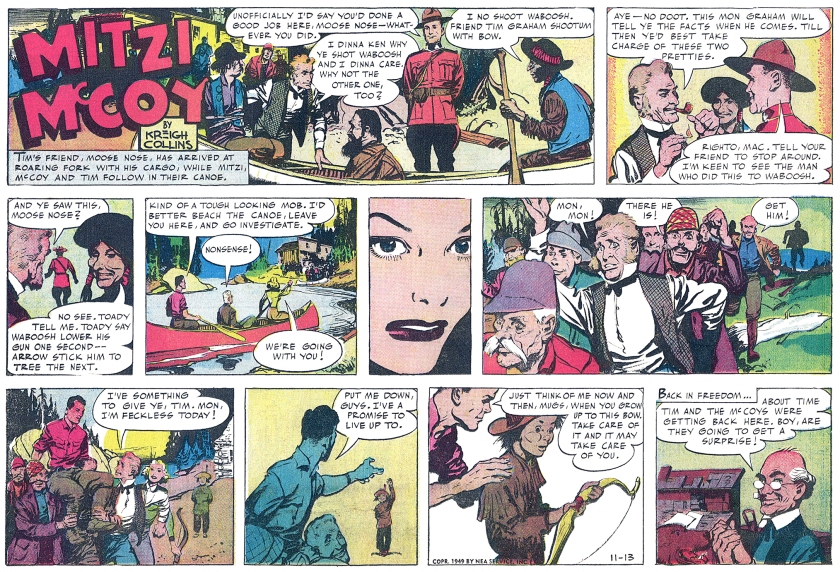 The “Bow and Arrow Bear Hunt” sequence ends neatly, with a chance encounter with an old friend, loose ends being tied up, and the final payment on a debt. “Mitzi McCoy” was hitting its stride nicely as it was about to transition into its most significant chapter to date, “The Christmas Story.”

Features director “East” Lynn was no doubt glad to see Mitzi reappear in Kreigh’s illustrations. In correspondence with his artist, he reminds Collins to portray the heroine in flattering poses, and raved about her “equipment… facial, pectoral and callipygian.” However, Waboosh has also taken notice of her arrival in Roaring Fork, and the stage is set for further conflict. 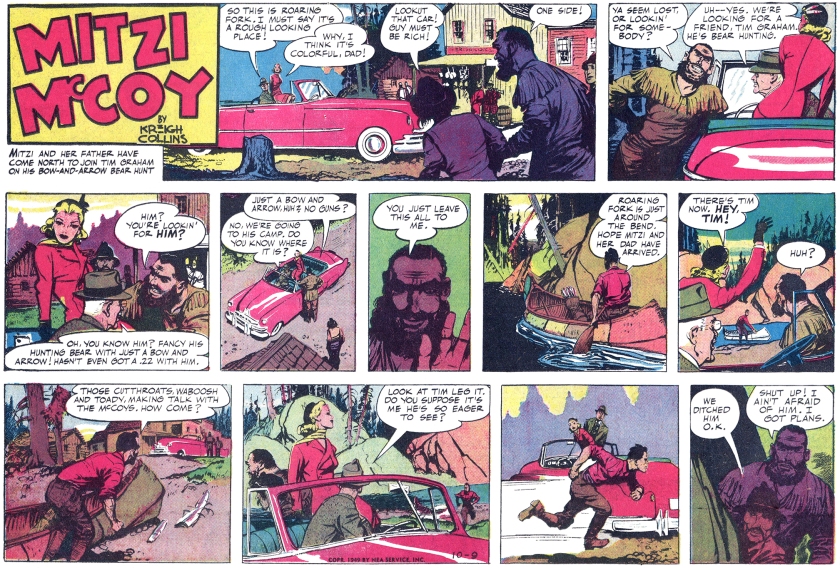 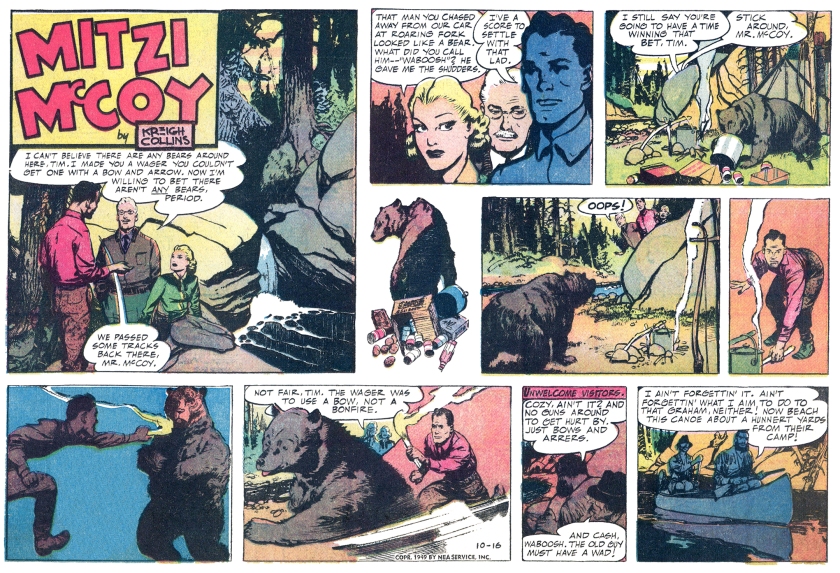 Coming to the north woods to hunt bears with a bow has left Tim and the McCoys at a disadvantage when confronted by Waboosh and Toadie. In the October 23 comic, things look especially dire as Waboosh kidnaps Mitzi at gunpoint. 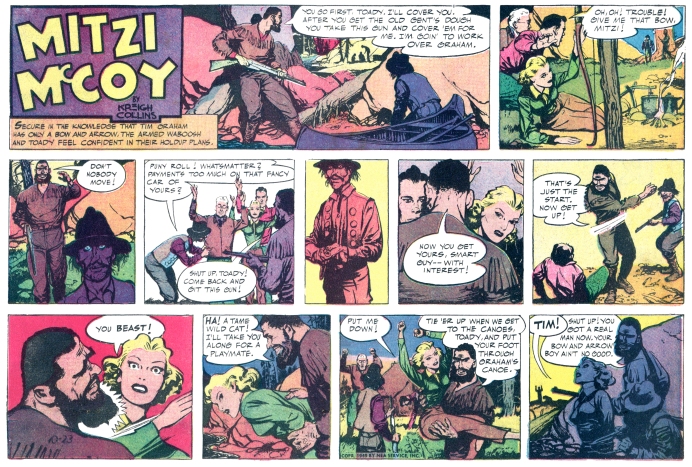