The next three “Bible Picture Story” comics show Jesus’ final hours. Confronted by an angry mob and at the mercy of an ineffective and conflicted administrator, he is stoic as his fate unfolds. 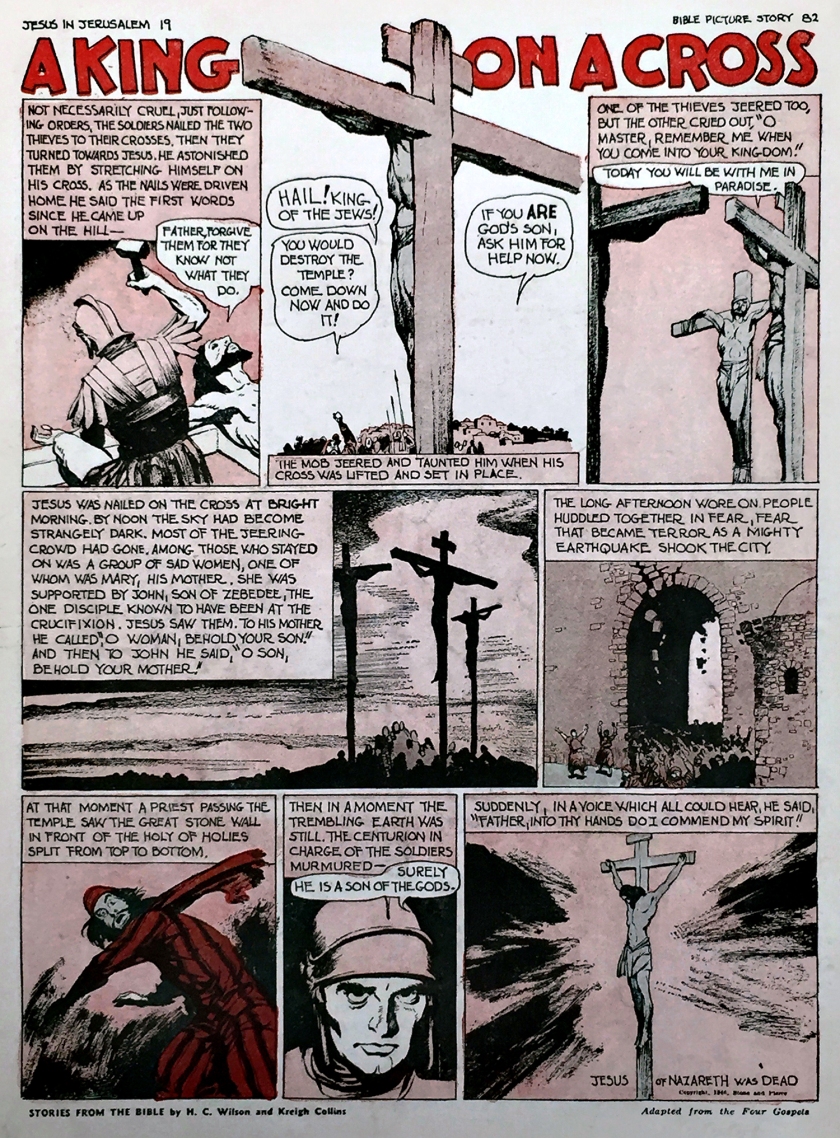 Although the narrative of Jesus’ crucifixion is likely one of the most famous stories ever, there is one unfortunate surprise ahead — as far as “Bible Picture Stories” are concerned.

Even though the subject matter of these “Bible Picture Stories” does not fully engage me, I find everything else very interesting. “Jesus in Jerusalem No. 13” has expressive character illustrations, relatable colloquial language, and the final two panels are wonderful. The style is quite similar to the prototype comic Kreigh Collins developed for the NEA, which evolved into “Mitzi McCoy.” (No big surprise, as it was illustrated at about the same point in time as these Bible comics).

To my eye, No. 14 doesn’t have quite the appeal of the previous comic, but the mood comes across very effectively, as Jesus’ fate hangs in the balance. No. 15 is another marvel. (“Insurrection!” and an raised eyebrow “AWK” — I love it!) It also features a nice variety of perspectives and facial expressions.

For each episode of “Bible Picture Stories,” Kreigh Collins received a lengthy outline from writer M. C. Wilson. Collins’ first job was to distill the story into six or seven panels, keeping the message intact, a very difficult task. Making it visually interesting was less of a challenge, but still no mean feat. With the Bible as subject matter, the artist had a fine line to walk, so as not to upset his editors or audience. As correspondence between MPH editor Morgan Stinemetz and Collins shows, the artist consistently delivered the goods.

These comics were finished in late summer, 1946, when conversations were just beginning between Collins and his future employer, the NEA syndicate. They appeared in issues of Boys Today and Girls Today in the spring of 1947, during Lent.

The Last Supper was a rare case of the subject matter being spread over two weeks (possibly the only time this happened). Here is part two. 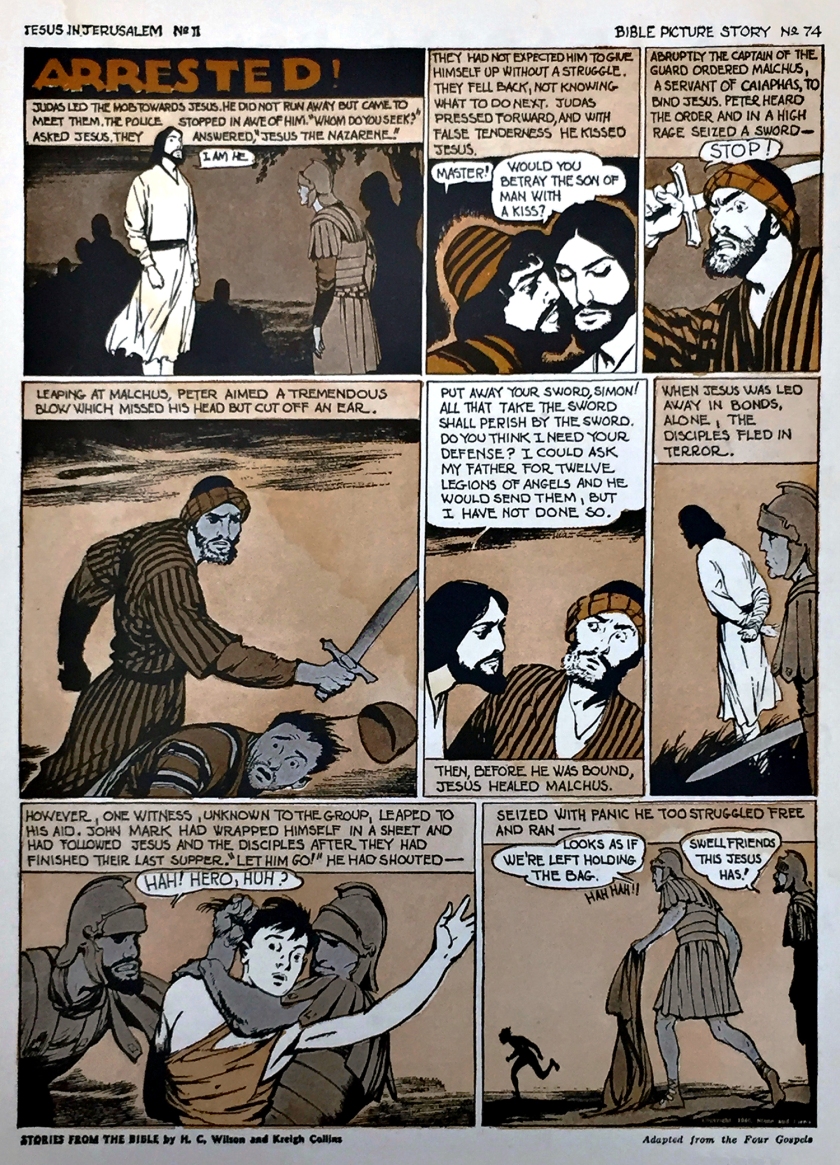 The Easter story is very familiar, even to a lapsed Episcopalian such as myself. However, I don’t remember Peter’s attack on the guard. The action in the fourth panel foreshadows the swordplay of “Kevin the Bold.” 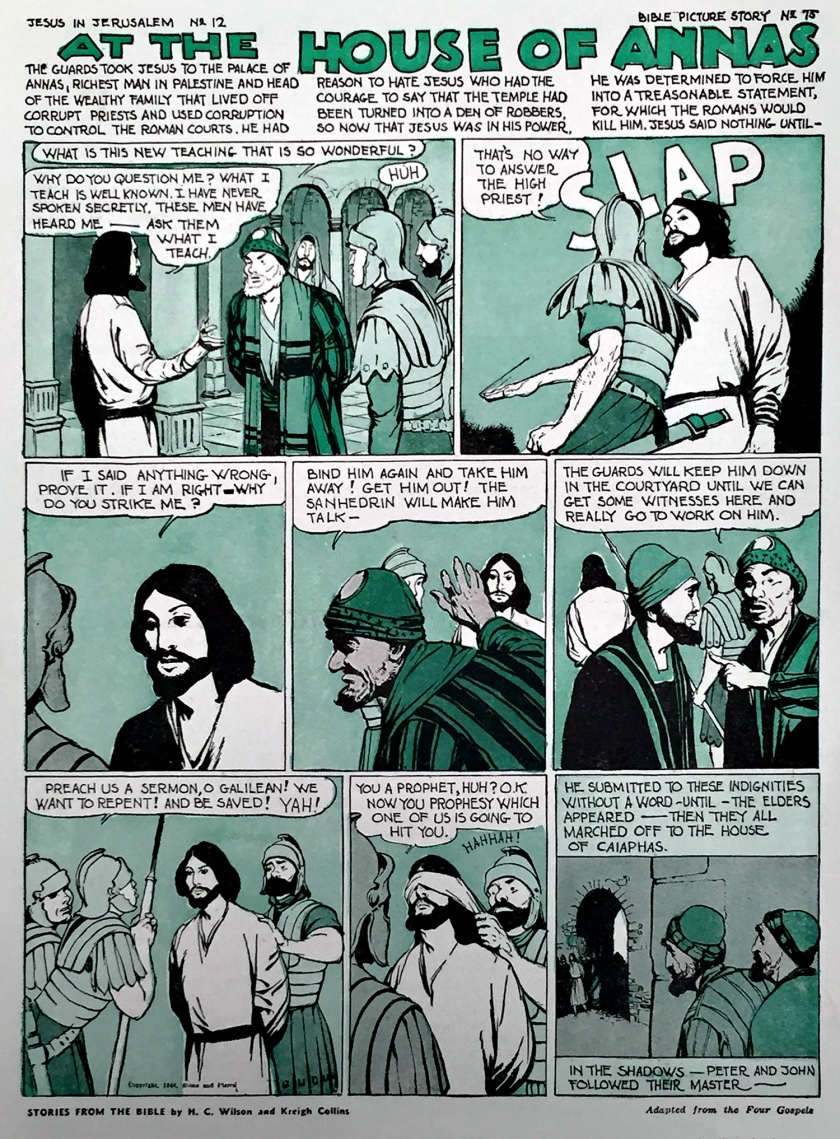 Due to their audiences, the MPH publications Boys Today and Girls Today likely contained some unique content. What they definitely had in common were the “Bible Stories Comics,” though the publications ran them in different two-color schemes each week.

Below, the girls’ version is on the left, and the boys’ is on the right.

“Preparing for the Passover” was the seventh installment of the “Jesus in Jerusalem” series, and it appeared on February 2, 1947. It is also labelled as “Bible Picture Story No. 70,” which would seem to indicate that the weekly series was in its second year. However, the “Bible Picture Stories” comics began four years earlier, in 1943. After the first two sequences, set in the Old Testament, a third one began, “The Story of Mary, the Mother of Jesus.” With the action shifting to the New Testament, it was also decided that the comics should start being sequentially numbered. What this all means is that “Bible Picture Story No. 70” is really more like number 174.

The Bible’s passion narrative lends itself well to being told in comics form, with its intrigue, betrayal, and dramatic conclusion. Kreigh Collins was a befitting choice to illustrate these comics, with his background in landscapes, architecture, costumes, and Biblical period illustrations.

For those keeping score at home, “The Last Supper (1),” / “Jesus in Jerusalem No. 8,” / “Bible Story Comic No. 71” is the 175th comic Kreigh Collins did for the Methodist Publishing House. (I wonder if the MPH ever considered having Collins illustrate any of the Book of Numbers?)