I recently received a copy of “Kevin den Tapre 1951–1955” from its publisher, Anders Hjorth-Jørgensen. His company, Forlaget desAHJn, has just released a beautiful volume of “Kevin the Bold” sourced from comics translated into Danish for the weekly magazine Hjemmet.

This volume represents the first half of the comic strip’s nearly decade-long run in the magazine (and word has it that a second volume is planned that will feature the remaining comics). Initially, I thought the book’s title contained a typo. While the comics inside originally appeared in Sunday papers from 1950–1954, the book’s title refers to the dates when they appeared in Hjemmet.

It has a great piece of promotional art to accompany its Forord (Preface), and yours truly is even thanked on its copyright page. (Aside to Mr. Hjorth-Jørgensen, Det er min fornøjelse! Please excuse my broken Danish).

While translating Danish is painstakingly slow for me, I can see that the layout is very nice; the Preface includes original art from Collins’ three NEA features, “Mitzi McCoy,” “Up Anchor!,” and “Kevin the Bold,” and the spread featuring “Up Anchor!” has some nautically-themed art accompanying it, a nice touch.

The book, over 200 pages long, is about the size of a half-tabloid comic. Its comics have great quality color, and it is obvious that much care was taken as the book was readied for print. By my count, there are 175 complete, original episodes—over three and a half years’ worth.

Many of the book’s images are familiar to me, and I am happy to have been a source for some of them. When I started this blog its aim was to raise my grandfather’s profile, and I am thrilled to see that it has done that. Leafing through the book, I am reminded of the expression, “it’s like looking at pictures of my children”—when in fact, many of the pictures are of my grandparents.

The book includes a long epilogue focusing on my grandfather’s early career as a painter, when he produced many landscapes, portraits and murals. I’m not sure what the price of the book is, but the ordering instructions suggest sending an email to desahjn@mail.dk to find out how to get a copy.

“Kevin the Bold: Sunday Adventures, September 5, 1954 to June 2, 1957” contains over 140 episodes of this rollicking, witty and dramatic lost Sunday comics classic! This volume startes up about a dozen episodes after “Kevin den Tapre” ends.

With elegant artwork and smart storytelling by creator Kreigh Collins, KEVIN THE BOLD blends swordplay, suspense, humor and history in a rugged, highly appealing blend! Sourced from rare syndicate proofs and are reproduced in crisp black and white, the volume contains 14 complete story arcs. (Please note: three of the book’s 145 episodes were scanned from Sunday comics).

I am happy to announce that “The Lost Art of Kreigh Collins, the Complete Mitzi McCoy,” is now available directly from me. Upon its 2018 publication, the book was exclusively available on the publisher’s web site. However, some people experienced problems with order fulfillment (including me!)—this was heartbreaking! After all, this project was a labor of love, and after having invested so much time in it, hearing about this situation was particularly vexing—I couldn’t do anything about it.

Because I now have a small inventory of the books, I am offering them for sale—with the promise that orders will be processed as quickly as possible. The cost per book is $30. For domestic shipping, I am charging $4; for international orders, shipping costs $25. To place an order, email me at BrianEdwardCollins1[at]gmail.com, and I will give you PayPal or Venmo information.

MITZI McCOY ran from 1948 to 1950 and showcased Kreigh Collins’ skill as an illustrator and storyteller. His picturesque landscapes, lovely character designs, and thrilling action sequences brimmed with detail and charm, and the strip’s ensemble cast rotated in and out of the spotlight taking turns as protagonists in the dozen story arcs collected in this volume. The last story collected in “The Lost Art of Kreigh Collins, the Complete Mitzi McCoy” is the narrative bridge that set Collins and his characters off on a new journey, beautifully told for the next couple of decades in the much-lauded adventure strip Kevin the Bold.

I have recently learned that a collection of “Kevin the Bold” episodes is forthcoming in a series of two volumes published by comics luminary Anders Hjorth-Jørgensen of Denmark.

“Kevin den Tapre” (Kevin the Brave) appeared in the weekly Danish magazine “Hjemmet” throughout the 1950s, first in color, then in black and white; these comics are the source material of what will be reprinted by Mr. Hjorth-Jørgensen’s publishing company, Forlaget desAHJn.

I will post further information on these books when it becomes available.

Podcast on the Making of “The Complete Mitzi McCoy” 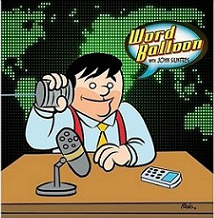 To learn more about Kreigh Collins, MITZI MCCOY, and how my recent book on Mitzi came together, listen to the interview I did with John Siuntres: “Anatomy of a Comic Strip,” from his long running pop culture audio podcast, Word Balloon.

Seeing “Mitzi McCoy” go back into print last year made me proud, as the comic strip is an overlooked gem in my (admittedly biased) opinion. This early sequence effectively distills its essence. At this point, the strip’s main characters are still being fleshed out, and lesser ones are slowly being introduced. Tim and Mitzi have just saved Mr. McCoy a bundle of money, and Freedom Clarion editor Stub Goodman worries that he could lose his trusted (and only) employee, Tim, to Mitzi’s father.

In a sweet third panel, Stub describes how proud he is of his newspaper (to his Irish wolfhound, Tiny), and reveals how much he loves his job. Reading through these comics, part of the fun is looking up obscure references (Samarkand?), and the penultimate panel is an exercise in understated beauty.

While the mood of the first episode was heart-warming, things darken a bit as we meet Sgt. Douma, a recurring character. Something’s afoot, and it could be dangerous.

These comics appeared as half pages in the Indianapolis Times and continue over the next two weeks.