Besides becoming an artist, the only other career choice Kreigh Collins considered was to become a magician. By the time he reached high school he’d made up his mind, yet magic cropped up in his work frequently enough. In 1937, he wrote Tricks, Toys, and Tim, a unique “how-to-do-it” book  published by D. Appleton-Century — Kreigh’s illustrations appeared throughout. In his later work, subjects related to magic came up — “Mitzi McCoy” had a sequence featuring a yodeling cowboy with a ventriloquist’s dummy (!) — and ventriloquism was featured again in this “Kevin the Bold” storyline.

If you find a copy, buy it! You won’t be sorry. More information on “Tricks, Toys, and Tim” here.

Unfortunately, Kevin and Tankard are unaware of the current fearful climate in the little Dutch city of Bomen.

The September 9 episode is a good example showing the difference between the Chicago Tribune’s superior color schemes and that of a typical newspaper. Although the image of the half page version is just a snapshot liberated from an old eBay listing, it has richer colors and and a much more extensive palette than the tabloid. 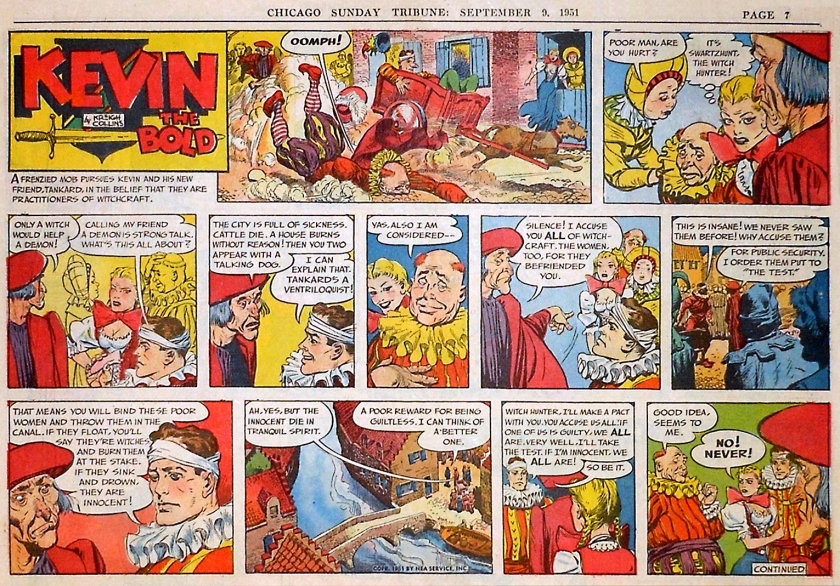 The ever-honorable Kevin bids to save his new friends’ lives by sacrificing his own. In what appears to be a cowardly move, Tankard quickly backs the idea.

Finding the perfect time to demonstrate his talents, Tankard saves the day. Meanwhile, Kevin is appreciative enough that Tankard accompanies him on his next adventure in Ireland, where no doubt he will demonstrate more magic.

To read the 1949 “Mitzi McCoy” sequence featuring the yodeling cowboy and his ventriloquist’s dummy, pick up a copy of The Lost Art of Kreigh Collins, Vol. 1: The Complete Mitzi McCoy, available here.

After being rudely welcomed ashore, Kevin makes an acquaintance with the opportunistic Tankard. There is plenty of knavery afoot, as geese come and go.

There is joy in the town, but its counterpart is manifest in the witch hunter, Swatrzhunt.

A little more than a year after the August 26, 1951 episode appeared in Sunday papers, its splash panel was repurposed as a cover for Tit-Bits, a weekly publication from Argentina. Tit-Bits featured other comics from the U.S., and even if you don’t know Spanish, like me, the strips are prettily easily identified. In addition to “Kevin el denodado,” typically there are episodes of “Ben Bolt Campeón,” by John Cullen Murphy, Dal Curtis’ “Rex Morgan, Médico,” and “Terry el Piloto/Terry and the Pirates” (George Wunder). Two comic strips whose names aren’t cognates also run—one is familiar to me (Lee Falk & W. McCoy’s “La Sombra/The Phantom”), and the other is not (“Las Llaves del palacio/The Keys to the Palace” by Fernanci). 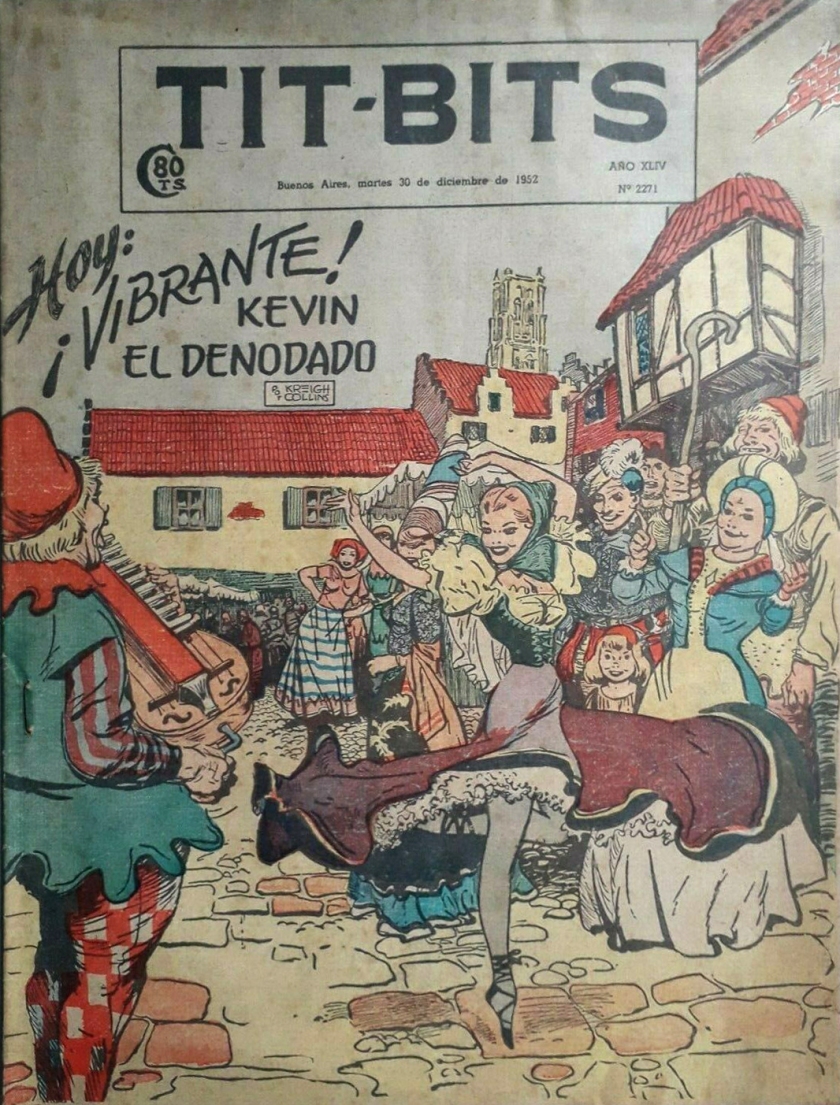 Later, there is more to come about “Kevin el Denodado,” but next week, Kevin’s adventures in Holland continue.