Wykes has been eliminated but there is still danger afoot.

After a quick getaway, some liberty appears to have been taken with the geography involved in this tale. The previous action had taken place around Roanoke Island, North Carolina, and yet now Kevin, et al., find themselves at the Jamestown Settlement, located over 100 miles away in Virginia. Or perhaps they paddled their canoe that far. (It’s possible this action was cut when the comic was reformatted as a one-third page!). At any rate, plans are being made for an ocean crossing, and a return to London. 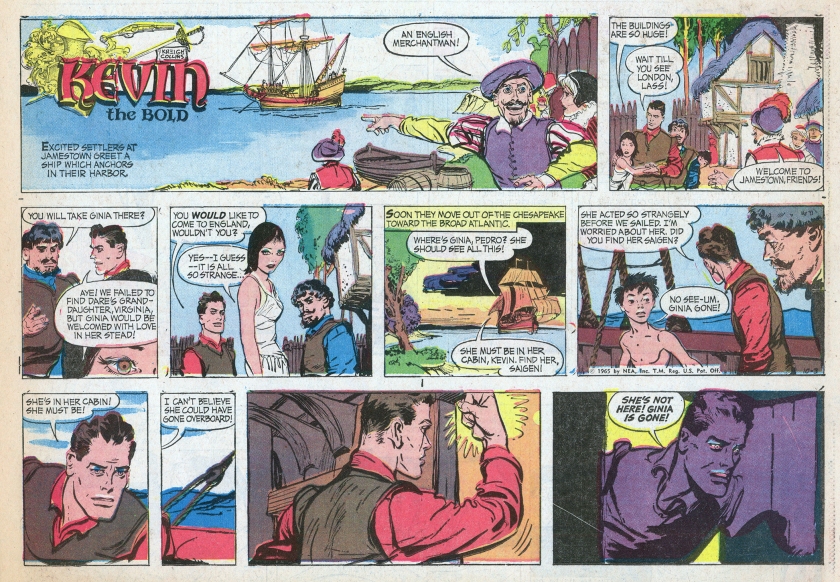 Saigen admits to abetting Ginia’s escape from the English merchantman, but happily agrees to stay aboard for the voyage across the sea. As a reward, Kevin begins telling the tale of Robin Hood, whose story becomes the next sequence in the comic strip’s narrative. Fittingly, recounting a story to a child is another device used by Collins throughout his cartooning career. It happened several times in “Mitzi McCoy:” the story of the Irish Wolfhound, the Christmas Story, and the McCoy Family Legend (which facilitated the transition of “Mitzi” into “Kevin the Bold”).

As the past few weeks have shown, this Roanoke sequence has contained several instances where plot devices Kreigh Collins used in earlier episodes were repeated. Sometimes even oddball phrases would reoccur.

There is no doubt that the introductory caption of the September 5 episode (above) would be worded differently if it appeared today. (I think “bundled sticks” would suffice). But at least an alternate spelling was used that better distinguished the word from its ugly sound-alike (how ironic it is that the term for this phenomenon is “homonym”). The more offensive spelling was actually used in an episode of “Kevin the Bold” that appeared nearly a decade earlier, again referring to firewood.

As for the theory Kreigh Collins mentioned in the newspaper article from a few weeks ago, he believes Ginia is better known by another name…

Back to the action, Pedro bravely saves Kevin and Ginia/Pocahontas, and then he puts his back into the action!

A deadfall device appeared early on in Kreigh Collins’ NEA cartooning career, in the ninth episode of “Mitzi McCoy,” which ran on January 2, 1949. It also raised the ugly specter of a beautiful girl being crushed to death.

To find out Mitzi’s fate with the deadfall, pick up a copy of The Lost Art of Kreigh Collins, Vol. 1: The Complete Mitzi McCoy, and turn to page 27. The book can be ordered here.

Hmmm… this foundling daughter sure has an interesting name!

Black and white tabloid proofs reveal the travesty of the one-third-page format—the last two panels are deleted! And in the August 29 episode shown below, the omission is even more egregious—a plot point is left on the cutting room floor. Meanwhile, Wykes sets his brutal plan in motion.

Ginia’s harsh criticism leads her to suffer the same fate as Kevin. As she fills Kevin in on Wykes’ plans, salvation appears low on the horizon.

Kevin is confused by his new acquaintance’s behavior, and their relationship gets off to a rocky start.

The two develop a certain amount of trust, and the July 25 episode presents Kevin with a couple of surprises.

Saigen harks back to a character from a September, 1949 “Mitzi McCoy” episode. Tim Graham is saved in a very similar fashion by Mugs, another Native American boy. (This reminds me of a line by David Byrne, “There are a finite number of jokes in the universe.”)

Although Kreigh Collins portrayed Native Americans as both heroes and villains, their speech was usually presented in the stereotypical fashion common of the era, a broken English where “me” was used instead of “I” and “-um” was appended to words. Kevin also shows some bias in making the mistake of underestimating his new friend Saigen. 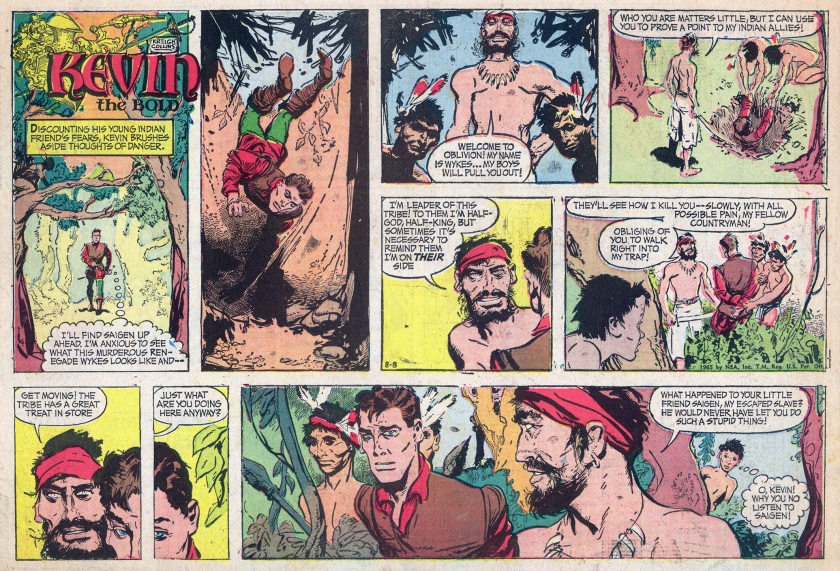 Not only that, but Kevin falls into the same trap as in an adventure from five years earlier…

…as did Kevin’s dog Rory, in the comic strip’s inaugural 1950 sequence.

As a kid, I remember digging holes for this type of trap out in the woods behind our house. Or more likely, I recall my brother Brett doing it in hopes of capturing me! We must have learned this trick from our father.

Tiger Traps and Other Comics

The 1950 “Kevin the Bold” episode directly above is featured along with 110+ others in “The Lost Art of Kreigh Collins, Vol. 1: The Complete Mitzi McCoy.” It also features a wonderful essay by Eisner Award-winner Frank M. Young and is available here.

In what could be the worst bachelor party ever, Kevin and Luoth spend the eve of the wedding working hard on a risky and dangerous task.

Following his night of hard labor, Kevin is spent. The panels in the middle tier of the episode above are hysterical—with the first two contrasting the eager bride and the reluctant groom, and the third panel existing somewhere between the screwball and the absurd (and practically begging to be taken out of context). Meanwhile, Kevin faces his moment of truth.

Mascarading as Hercules, Kevin passes one test, but unexpectedly faces another.

Luoth understands that if Barda breaks the engagement, it is mutually beneficial to Kevin and himself. Luoth is willing to take a great risk in order to restore his standing with Barda. Finally, a sudden thunderstorm and some quick thinking allows Kevin to escape his fate as a married man.