Happy New Year! January 1 also marks Kreigh Collins’ birthday; he would have been 48 years old when the following story arc appeared. The first two episodes are beautifully illustrated, and show Kevin sailing past the Isle of Sark. As is the case with many of the plot lines in “Kevin,” I was inspired to look up where exactly this little island was located—and I became intrigued by the local talent at the Elephant and Castle.

The previous episode’s splash panel is lovely, but it is no match for the one that followed. The third panel is also masterfully executed—the Strangler is a menacing villain straight from central casting.

Growing up, I thought including a holiday recap letter with one’s Christmas card was a new phenomena. I also found most of these holiday messages a bit tedious and self-serving. It turns out that year-end letters weren’t a new concept, but an old tradition, and like many things, the old versions seem better than those from the present.

Kreigh Collins generally wrote his family’s holiday letters, and one could generally tell if he had also typed them up by noting any misspellings (Kreigh was a notoriously poor speller). Throughout his career, his wife Therese (Teddy) served as his secretary and editor, as well as his model and muse. The Collins family’s holiday letters had the added bonus of Kreigh’s illustrations, and included some interesting details in the life of the well-travelled family from Ada, Michigan.

The examples I have start in 1964, and the earliest one is my favorite, as yours truly received top billing. 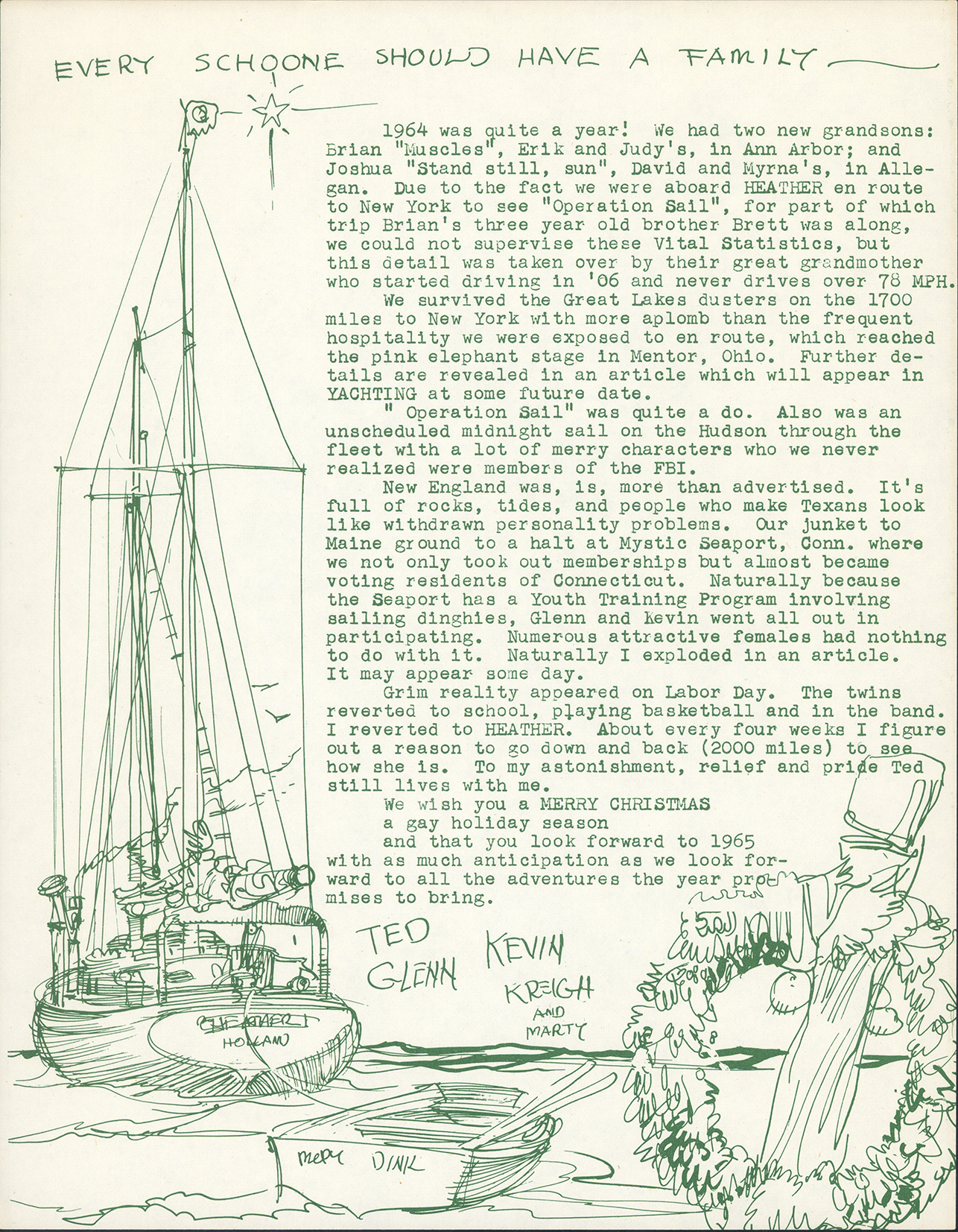 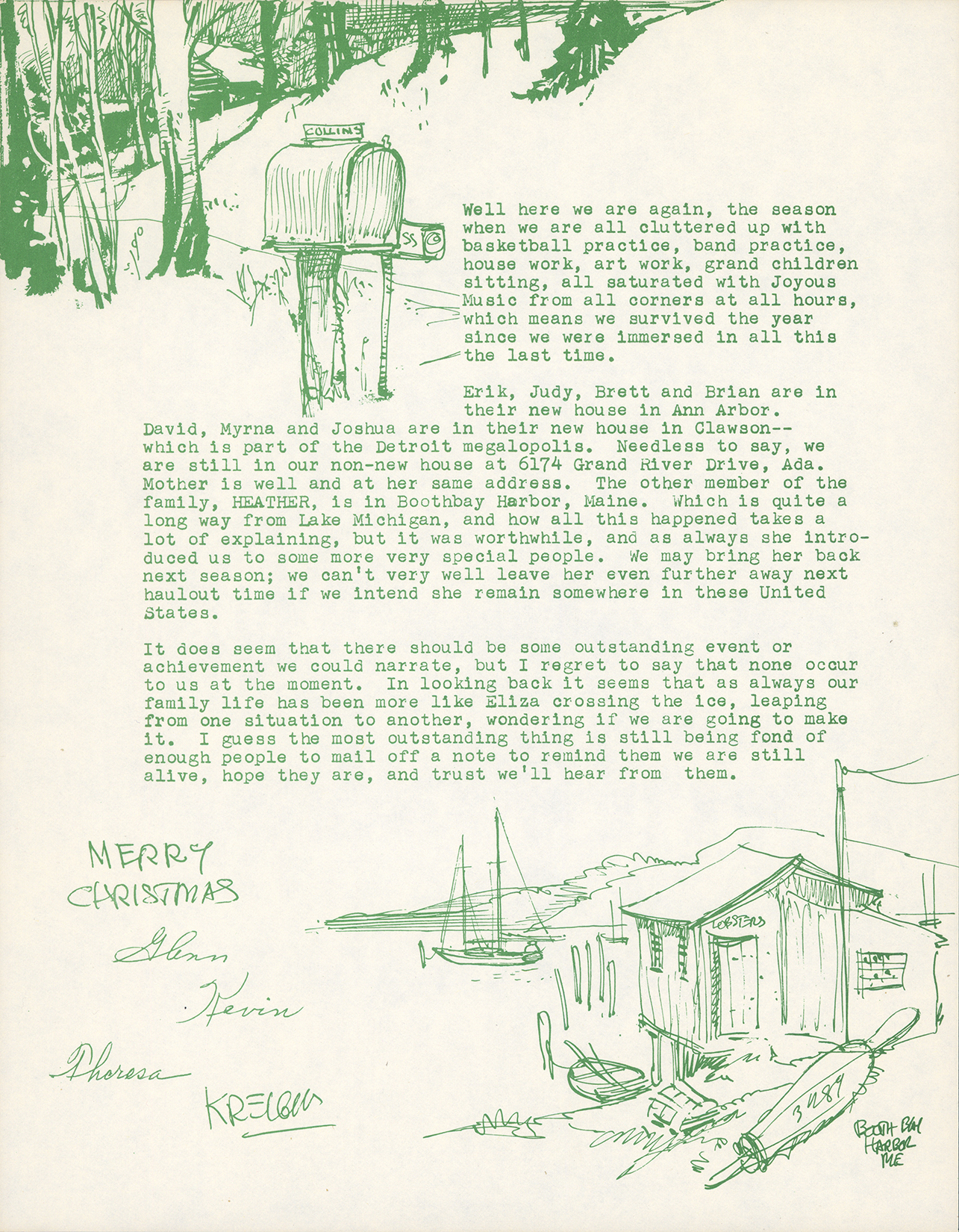 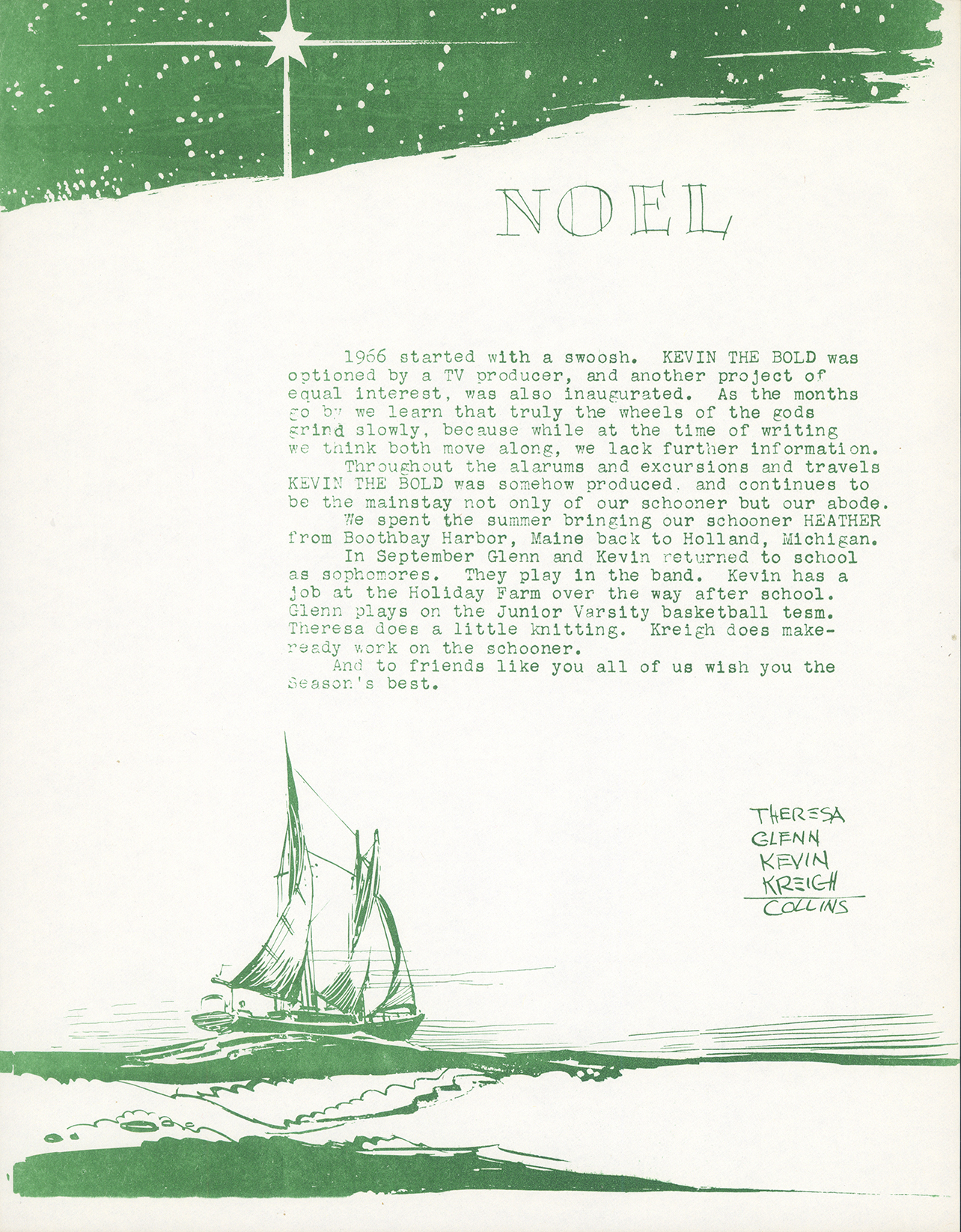 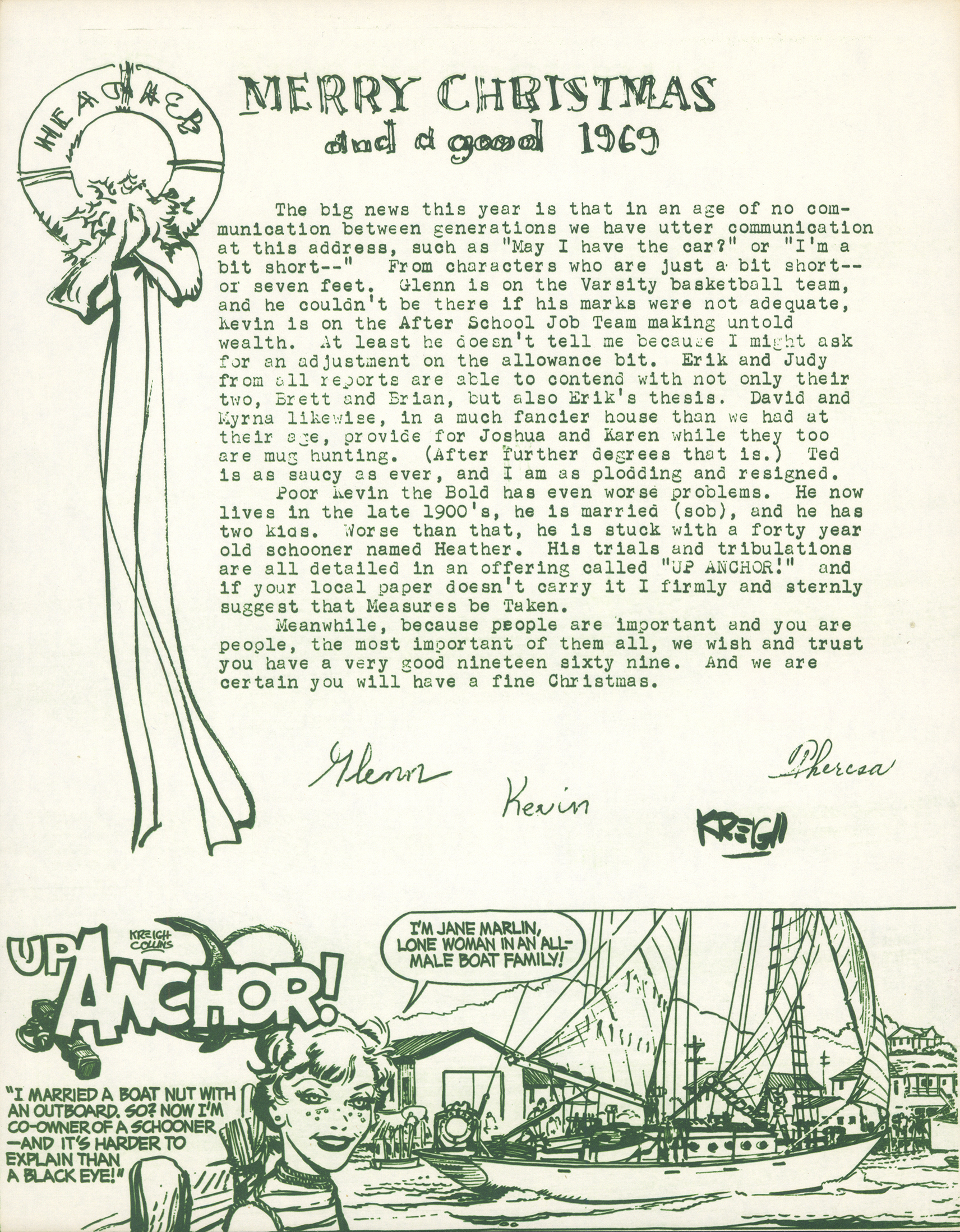 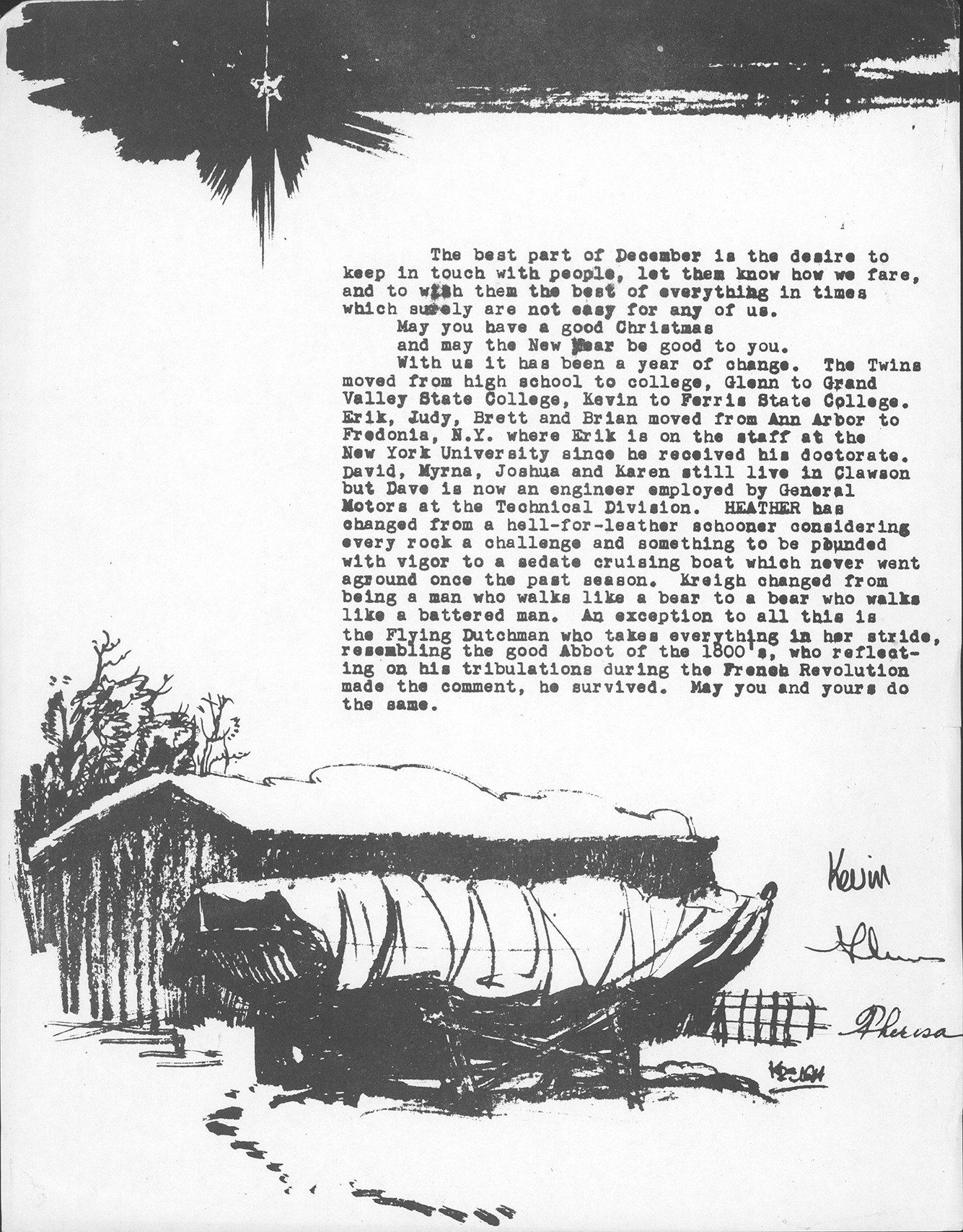 The letters also betray a bit of Kreigh’s growing weariness, as his career wound down as the 1970s approached. “Kevin the Bold” never did appear on TV—instead the strip transitioned into “Up Anchor!”—and the family’s sailboat and home away from home, Heather, was sold.

A couple of the letters are missing from my collection (1967, 1970, 1971), and the final one (1972) was written by Teddy. The letter itself was jettisoned, as the Christmas card incorporated the holiday message, and the whole process became simplified. 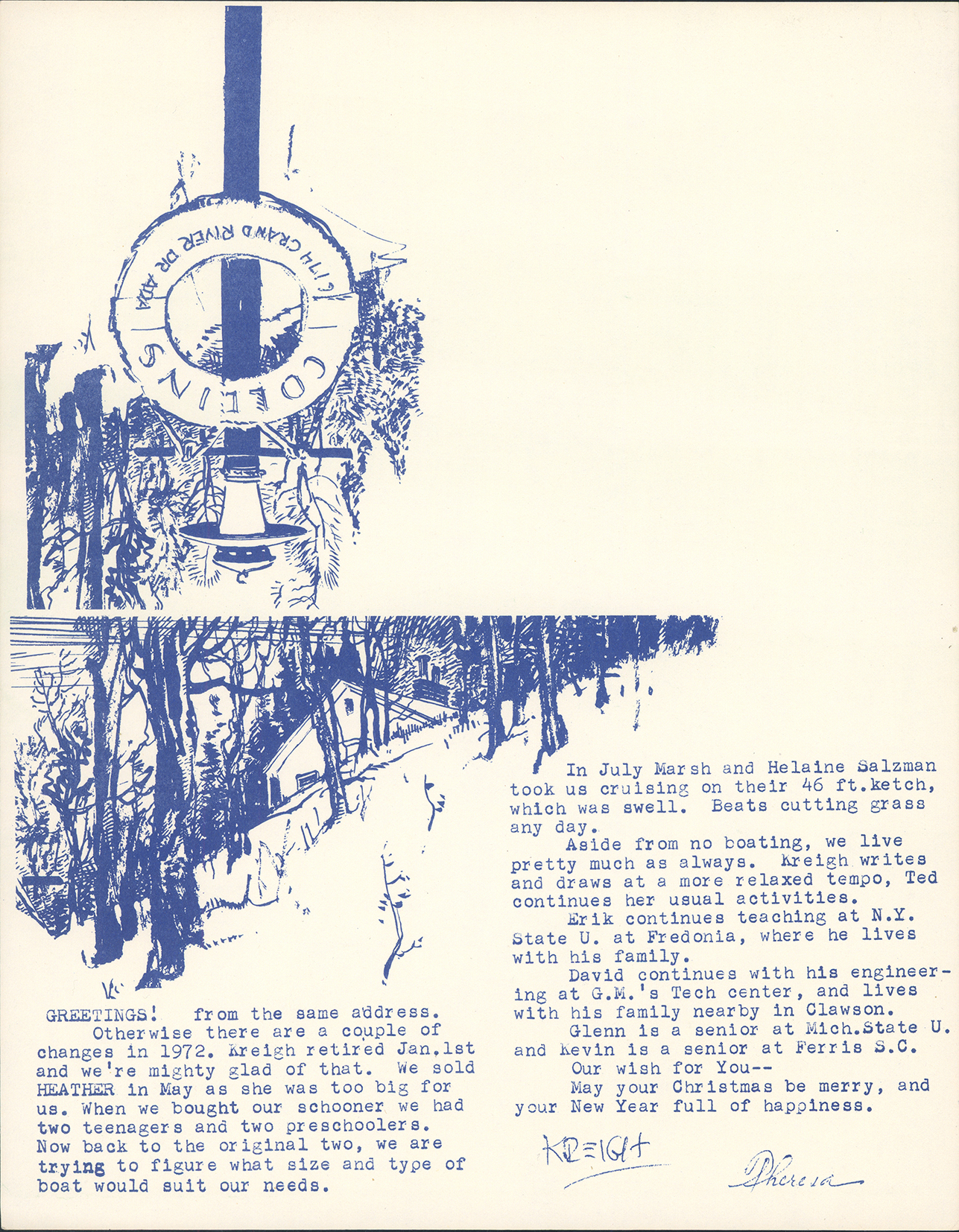 For 2018, to both my far-flung readers and those closer to home, I am wishing good health and all the best in the new year. Personally, I hope the new year results in the publication of my “Mitzi McCoy” book, so long in the works (I began scanning the comics nearly five years ago). For any potential readers, I appreciate your patience.

May your dreams also come true this year. 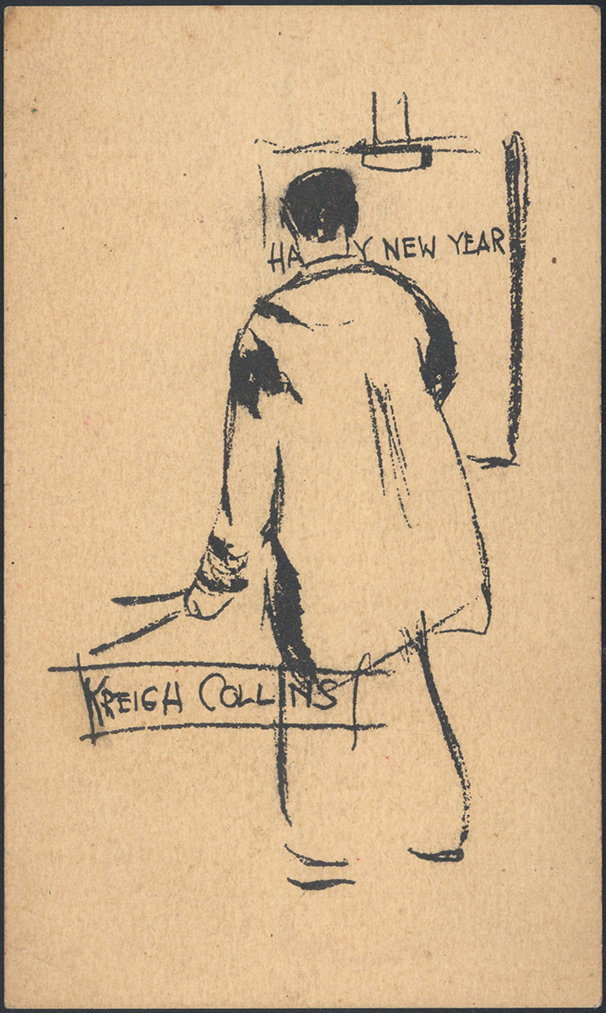 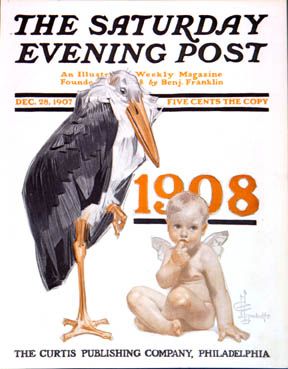 Kreigh Collins was born on New Year’s Day, 1908. As a baby he may have resembled the tyke on the Saturday Evening Post’s annual New Year’s cover, but he eventually grew up to be a large man — 6’3″ and 240 pounds.

Kreigh developed an interest in art and cartooning at an early age, and by the time he was about 11 years old, he was producing some rather fine work. His father served in the United States Army, and during the Great War, First Lieutenant Stephen Collins was stationed on the front lines in France. Germany was the enemy, and so it was that German soldiers played the fool in some of Kreigh’s early comics. 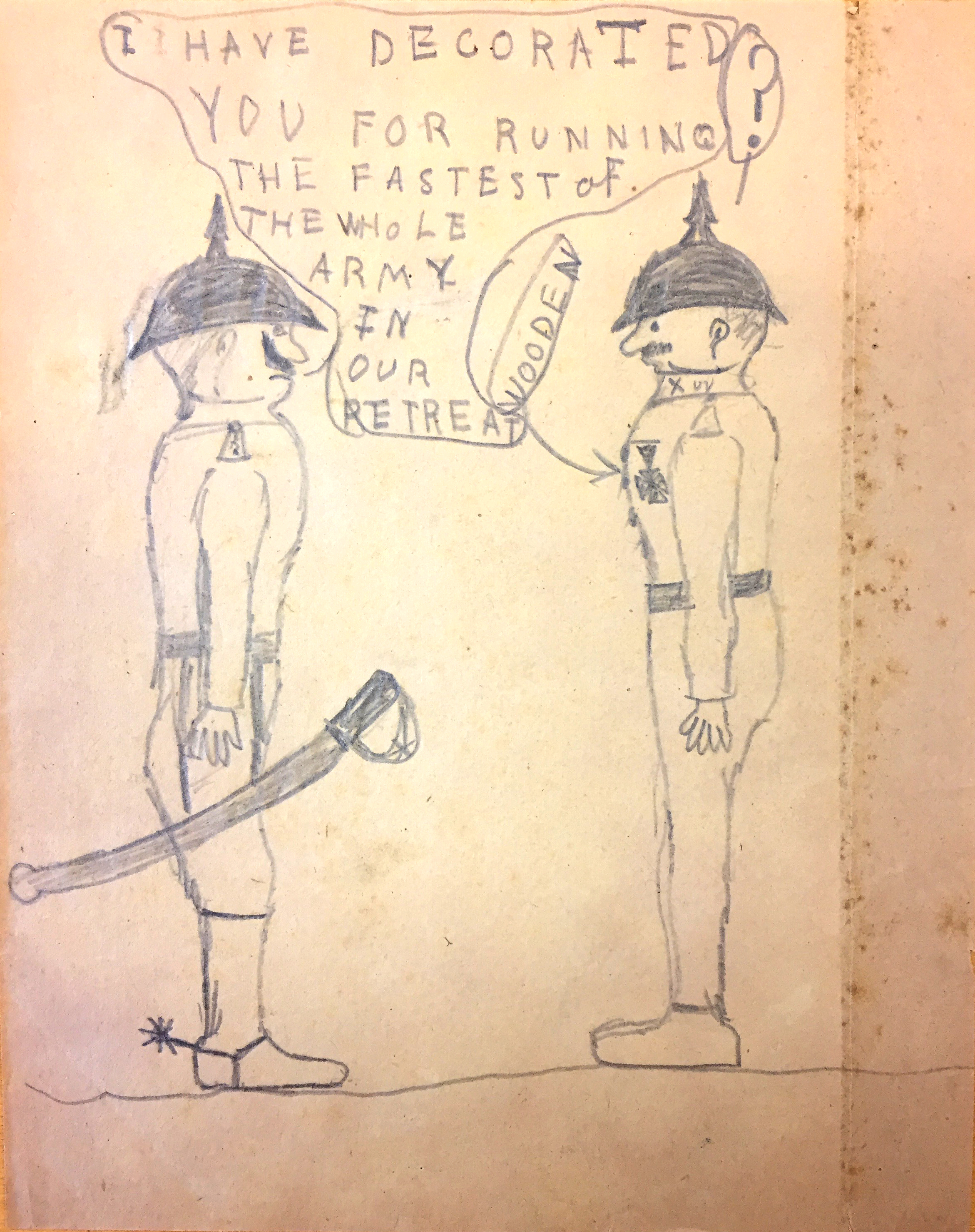 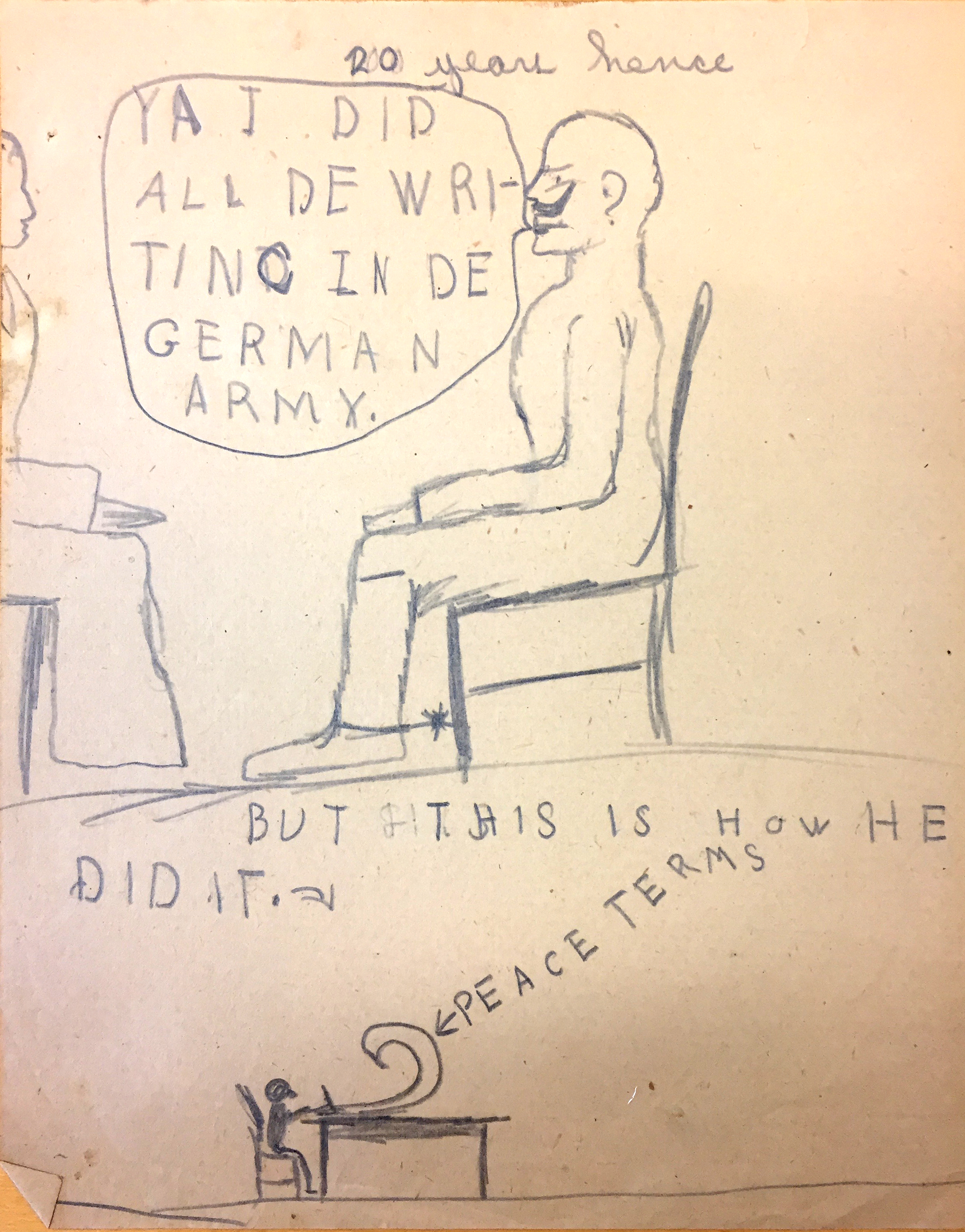 These comics are in the Local History collection of the Grand Rapids (Mich.) Public Library. Despite the horrors of World War I — trench warfare and the use of poisonous gas — it’s refreshing to see a more gentle take on the portrayal of our adversary.

Another cartoon seems to have been inspired by current events — likely the 1919 anarchist bombings or the 1920 Wall Street bombing. Approximately a year older than when he created the earlier cartoons, Kreigh had now advanced to a multiple-panel format. 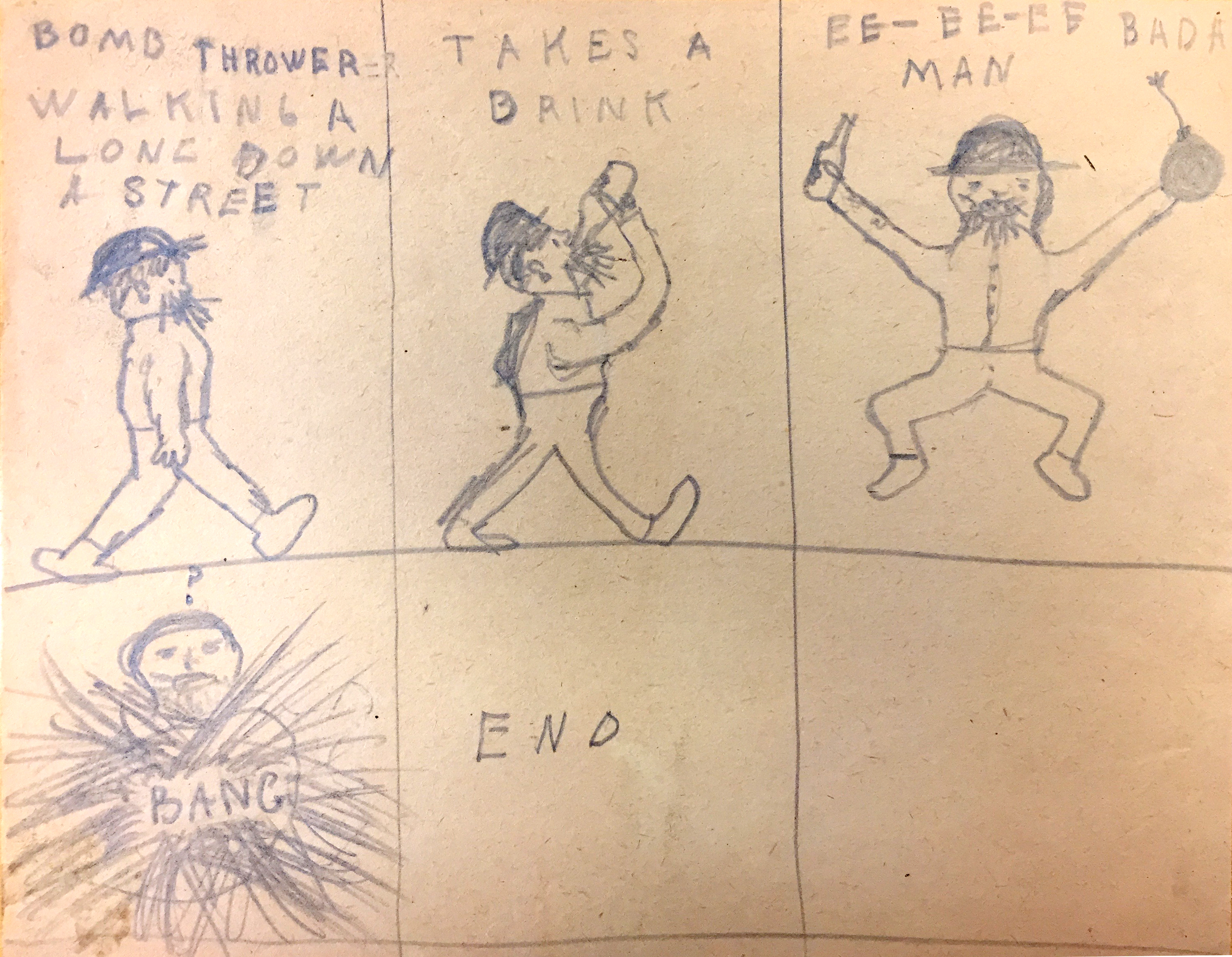 Some later drawings look like character studies, and appear to show a couple of British gents and a portly businessman. Two are nicely developed, and it seems Kreigh thought so too, as these were signed. 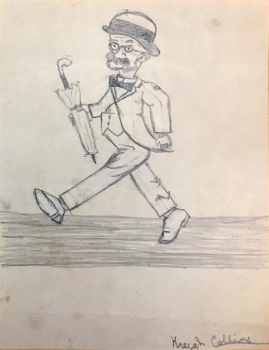 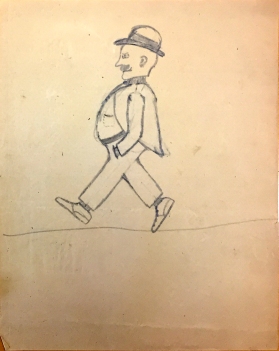 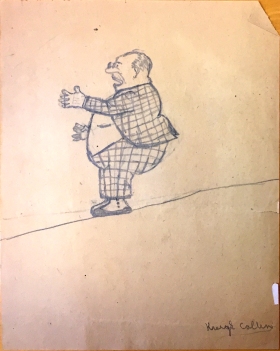 Our final comic is a two-panel job showing a clueless man strolling down the street reading a newspaper’s sports section. By this time, the Collins family had settled in Grand Rapids after living in various locales across the U.S. since Kreigh’s birth. Who knows, maybe Michiganders always made fun of those rubes from Toledo? A nice detail is the shading used in the second panel showing the subterranean darkness, and it’s interesting that the comic would still work today if a cell phone replaced the man’s newspaper. 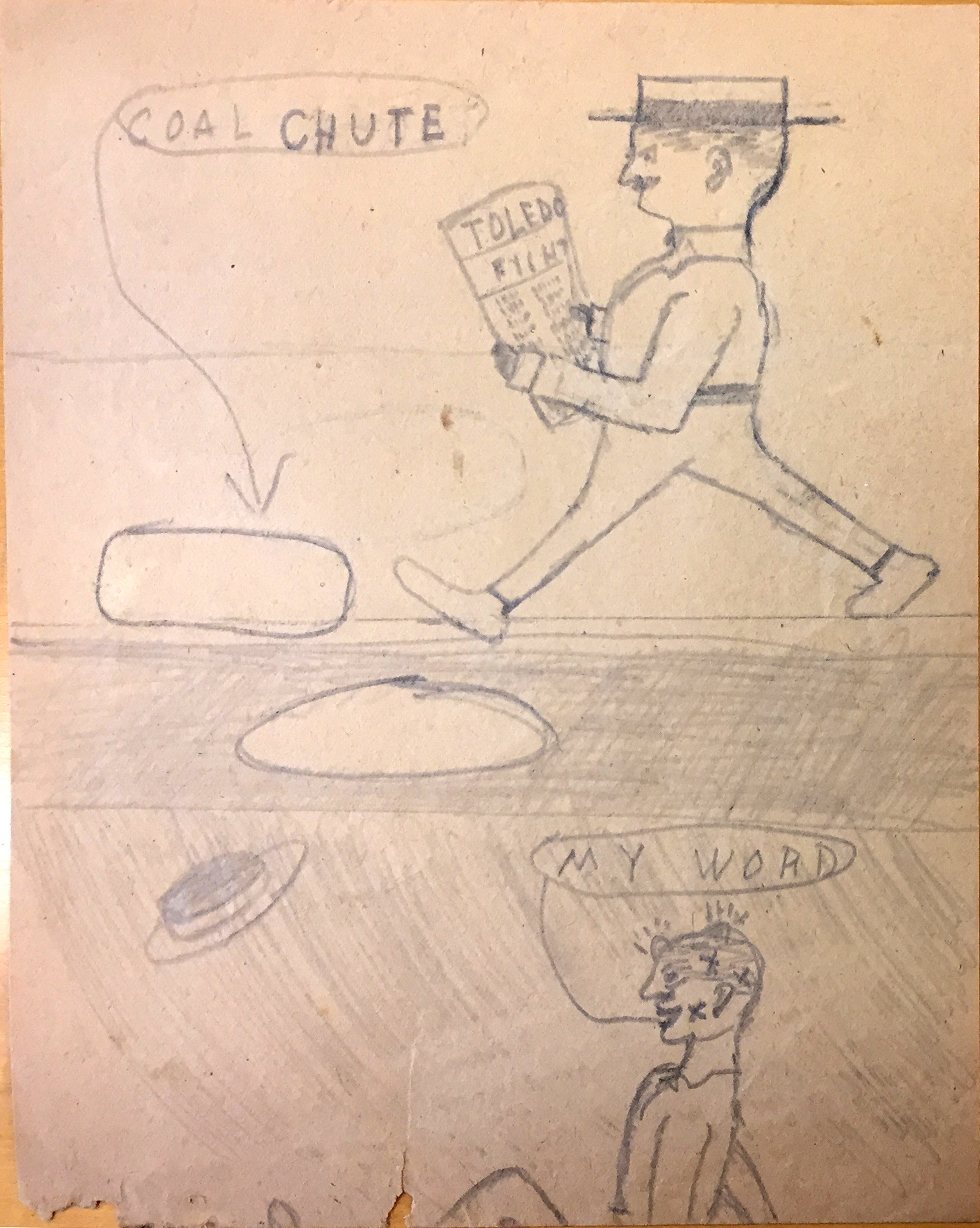 1968 was filled with change. After appearing for 19 years, “Kevin the Bold” ended its run. At the age of 61, Kreigh Collins launched his third comic strip, “Up Anchor.” This fresh start was the big news in the holiday letter Kreigh and Teddy sent out that December. There were also family updates , typical New Year’s optimism, and a dose of Kreigh’s wit.

“Up Anchor” ran until early 1972, and after its 174 episodes, Collins retired. All told, Kreigh’s comics appeared for 25 years, spanning four decades — over 1,200 Sundays.