Kevin’s new friend Paul Fortin proves that love is blind… in this case, to danger. 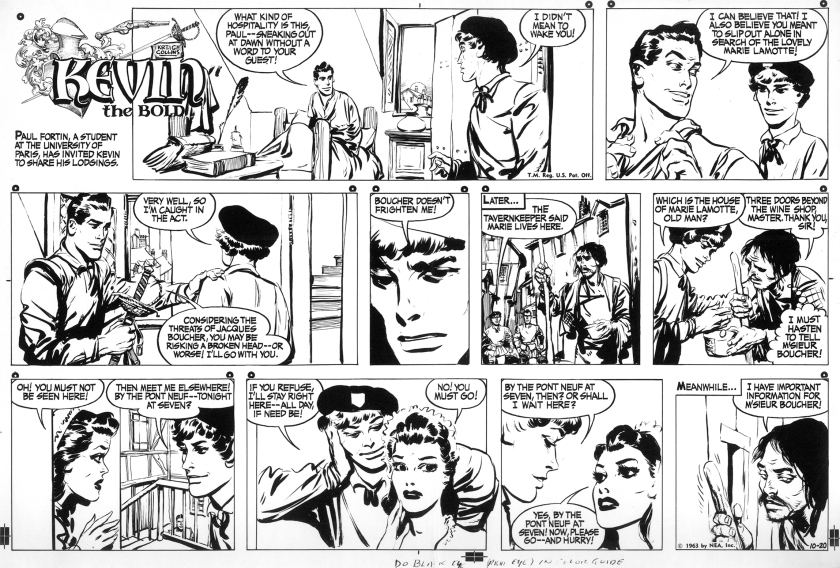 After taking a punch in the previous week’s episode, Paul was left with a nasty black eye. Instructions for the colorists were left at the bottom of the original illustration, but unfortunately, I do not have any color examples of the above comic to show how the bruise was rendered. However, the comic below, with events from the same day, shows no evidence of Paul’s black eye (although Kevin mentions it in the dialog).

Despite a beggar’s helpful tip, Jacques Boucher shows how ruthless he is—not a good sign for Paul. Making matters worse, Boucher is not the only one plotting against the young student.

But worst of all (to Paul), he has now been rejected by the object of his desire.

Visit the Lost Art Books website to place your order for The Lost Art of Kreigh Collins, Vol. 1: The Complete Mitzi McCoy. In addition to the entire run of “Mitzi McCoy,” the book includes the opening sequence of the comic strip “Mitzi” evolved into, “Kevin the Bold.”

The book also features an extensive introduction and previously unpublished artwork and photographs.