Little does Kevin know that his unexplained black eye will lead to worse circumstances.

As far as this particular story arc goes, one definite bonus is the fact that I have Chicago Tribune examples of each episode. While the paper was long past its heyday of incredible color separations and reproduction—some “Kevin the Bold” episodes from the early 1950s are simply stunning—the paper still created its own printing plates, which led to higher-quality final results.

Comparing an episode from the Trib with one from the Florida Times-Union could be seen as comparing apples to oranges, with the latter’s output often being rather magenta-saturated, a close comparison between the two shows that the Tribune did indeed use different printing plates than those offered by NEA Services to its regular subscribing newspapers. In some panels it is hard to determine if the difference was simply due to the flood of magenta ink and indifferent press operators, but in the Trib‘s splash panel, the lower portion of Kevin’s cloak clearly shows shades of both orange and red, while in the Times-Union version it’s all reddish orange.

It’s a shame that raven-haired Gertie has gotten mixed up with the Strangler, she’s generally my favorite part of any episode in which she appears!

When I was a lad, I joined a judo team and took lessons for several years. We learned a bit about Japanese culture and a little bit of the language (I still remember how to count to 99). I got a start at a young age, and did pretty well. I loved it.

To win a match, as I recall, you basically needed to score one point. A nice throw might earn a half point (wasa-ari), and if you achieved two nice throws, it was enough to win. A quicker path to winning was to flip your opponent with a more or less perfect throw, and the referee would call “Ippon!“—meaning one point (and game over). I did this once, I can still remember my opponent coming at me, forcing me to retreat, until I spun and unleashed my bread-and-butter throw, the seoi nage.

I only mention this because I thought there were three more episodes in this story arc, when there is in fact only one. And while the blow Toshi delivers is nothing like anything found in Judo (outside of an Austin Powers movie, maybe), it causes a sudden, decisive ending to the fight.

It’s unfortunate that I don’t have an actual copy of this concluding episode, and it looks like it may contain a pice of clip art—a photostat of Kevin’s sword, appearing in the panel after the throwaway. This time-saving device was used by Collins somewhat frequently during this period.

Since this was such a short post, let me fill some space with a recent photo of a special beer tasting.

I wrote about these beers last November. I provided customized label artwork for a brewery in my grandfather’s old hometown—Ada, Michigan’s Gravel Bottom Brewery—and the brewery produced three varieties as their first bottle releases. I had previously tasted the base version (Kevin the Bold Russian Imperial Stout), and it was quite nice, but I think I preferred a version that I’d cellared for the last year, “Kevin Goes to the Beach,” with its subtle coffee, coconut, and vanilla flavorings. Aging it really helped. Later in the winter, I’ll surely be cracking open the last one, “Kevin Goes Camping.”

If you’re reading this on November 7, Happy International Stout Day!

Following the lengthy story of Kevin, Rupert, and Madeline, here is something of a palate cleanser. Presenting… Kevin the Bold Imperial Stout. It’s debatable how well a rich, heavy brew like this would work as an entremet, but until someone comes up with a Mitzi McCoy Blonde Lager, this will have to do. 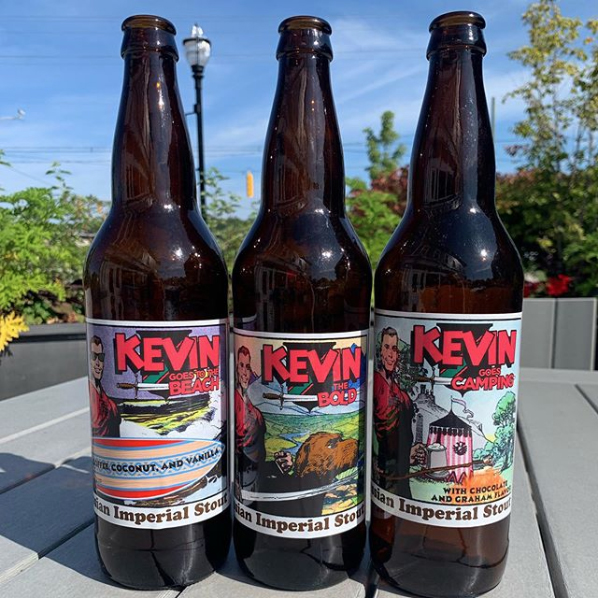 For most of his life, Kreigh Collins called Ada, Michigan, his home and it is only fitting that the beer was produced by Ada’s Gravel Bottom Craft Brewery.

Three varieties were produced to celebrate the company’s sixth anniversary. Using both original comic strip art and scanned newspaper comics, I worked with head brewer Nick Roelofs in designing the labels, and I’m pleased with the results.

The base version of the beer (“Kevin the Bold”) is a barrel-aged Russian Imperial Stout, and the other two have added flavorings. “Kevin Goes to the Beach” uses coffee, coconut, and vanilla, and “Kevin Goes Camping” has a “smores” theme, and uses chocolate and graham flavor. These were the first bottled beers that Gravel Bottom has released.

I searched through my library of comics to find images that coordinated with the beer varieties, and paired them with the recurring image of Kevin. Initially, Gravel Bottom was going to make T-shirts with the bottle artwork—unfortunately, this idea has been moved to the back burner. However, the brewery has featured the artwork in some of their advertising. 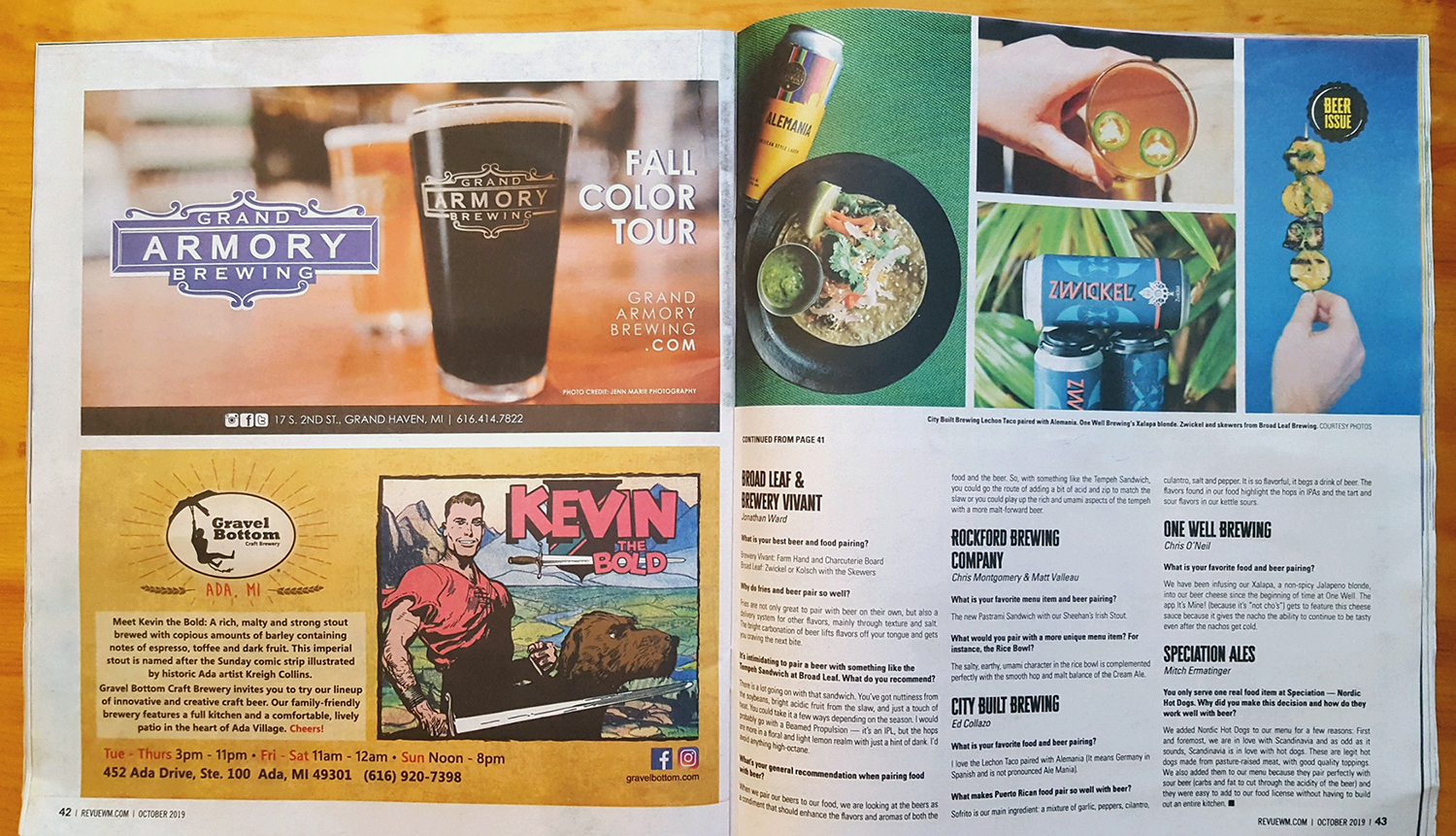 I have yet to taste the beer (I’m hoping they are still holding the bottles they promised me), but others seem to like it, according to online beer reviewing sites.