The March 18, 1951“Kevin the Bold” comic is packed with backstory. Kreigh Collins was known to haunt libraries while researching his subjects, but in this case, much of the context was observed firsthand. As a young man, Collins had spent time drawing and painting in northwest Africa. In the spring of 1928, he had crossed the Atlantic aboard a freighter with an early mentor, noted painter Mathias Alten. The first stop was Morocco; their departure for France was a couple weeks off. No doubt this experience came in handy when Collins scripted and drew the episodes for the next eighteen weeks.

Kevin hears the strange tale told by an English sailor, Patch, about an entranced blonde woman who whips Moorish pirates into a frenzy with her words and antics. Also introduced is Koko, Patch’s adorable and mischievous simian companion.

Thinking the strange enchantress could be the woman DeFalcon seeks, Kevin introduces Patch to the convalescing Count.

Skeptical DeFalcon doesn’t understand, but Kevin wants to hear more. He does, as the April 1 comic’s events are as vivid as its Chicago Sunday Tribune printing. 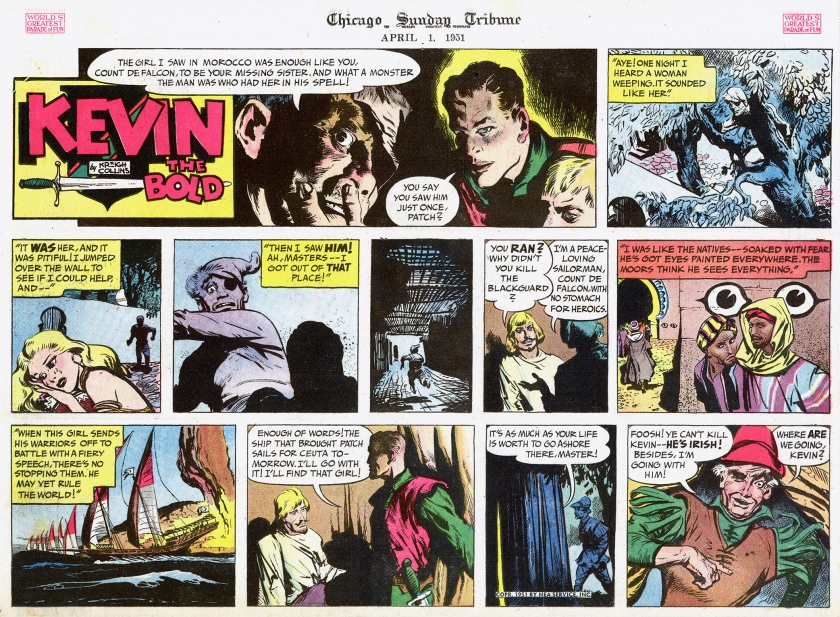 As Kevin prepares to set off on his next fantastic adventure, he witnesses another fierce scene — a piqued Moya McCoy, jealously storming off astride his own horse. Despite the embarrassment he felt over her scene, Lord McCoy comforts his distraught daughter, Moya. As Kevin and Stub recognize one of their ship’s crewmates, danger is sighted ahead.