Over the course of his 24-year career illustrating comics for NEA, Kreigh Collins received quite a bit of fan mail. No doubt it was flattering for Collins to read, but the real benefit was more tangible. Fan mail indicated engaged readers, and led to better treatment from the newspapers running the comics—more desirable placement in the comics section, and less chance of running in the unflattering one-third page version. When letters arrived at the NEA offices, staffers wrote back, thanking them, but suggesting they send praise directly to their local paper.

During the “Mitzi McCoy” era, Stub Goodman’s dog Tiny was the inspiration for much of the positive reader response. Tiny was an enormous Irish Wolfhound, and became the favorite of many, especially members of the Irish Wolfhound Club of America. Initially, these letters were encouraged—Lynn thought he could mobilize an enthusiastic base in a letter-writing campaign to help boost “Mitzi” ’s profile. Soon, however, it was decided the amount of energy spent catering to the wolfhound aficionados outweighed any benefit they provided. 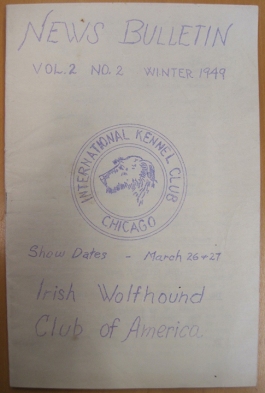 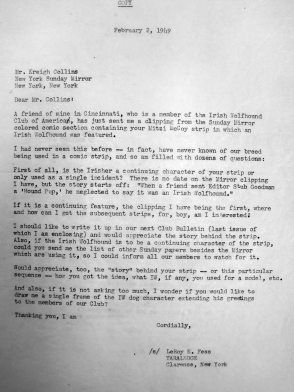 After the successful debut of “Kevin the Bold,” one letter writer wondered (correctly) if the the comic strip was created by the same Kreigh Collins he had known who did illustration work for Chicago ad agencies in the early 1930s. (After all, my grandfather wasn’t the only one with that unusual name).

What other letters often had in common, besides praise, was a request. Would Mr. Collins please sent an autographed photo? Could he please send a drawing of Tiny/Mitzi/Kevin? Or would he be able to send a piece of original artwork?

Collins was happy to oblige. In his era, original comic art didn’t hold the cachet it does today. By the time his original illustrations were returned to him, those episodes were ancient history, and Collins would be busy refining layouts for upcoming comics and developing scripts for future ones. Besides mailing art to far flung fans, Kreigh also gave them to friends closer to home. Though it isn’t in fantastic condition, my favorite “Kevin the Bold” original is the one my Grandpa Collins gave to my Grandpa Palmer (my mother grew up in Grand Rapids, about ten miles from my father, who hailed from Ada, Michigan). 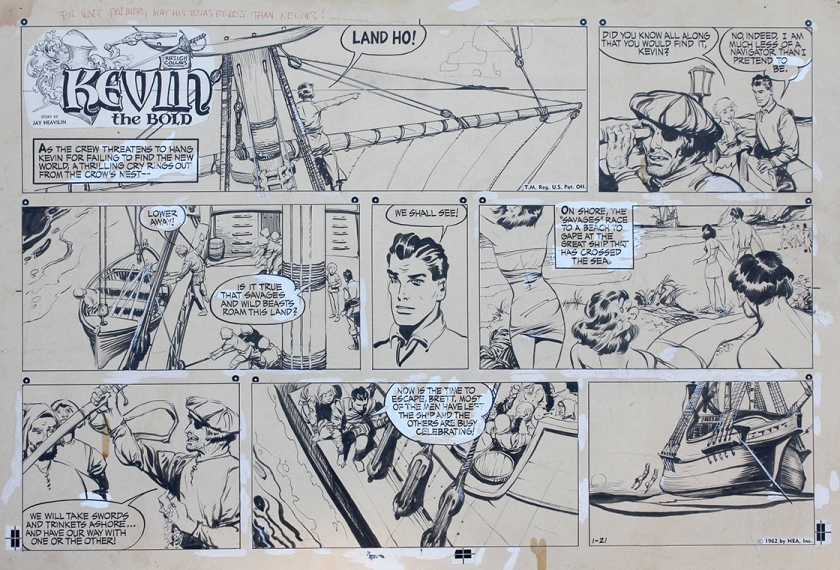 Personalized by the artist, top left.

Many letters complimenting Collins’ fine illustrations came due to his dogged research efforts, whether of 16th-century Austrian armorer Konrad Seusenhofer (“my family were armorers for generations going back as far as 1250… would you be so kind to give me the source of the information…”), 16th century sailing ships (“Above all I have enjoyed the lavish details that you put into your caravels…”), or period-appropriate clothing (“the thing I am so very fond of are the gorgeous clothes”).

Features Director Ernest Lynn used the fan mail as a sales tool. A letter sent to Miami Herald brass collected several glowing quotes and a referenced the Chicago Tribune’s use of “Kevin the Bold” in an attempt to persuade them to feature the comic.

Letters from hobbyists and art students are one thing, but recognition from peers is something else. Another 1952 letter came from comic book artist Edmond Good. I was unfamiliar with his name, but after seeing his telltale signature, I looked him up.

A new sequence of comics begins nest week, in honor of the season.