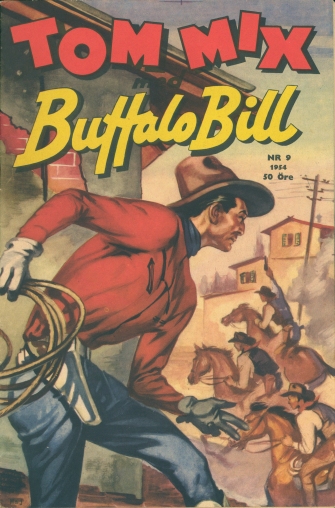 At some point in the 1970s, “Kevin the Bold” was published for a market in Norway. I have no information about the comic book shown (above, left) other than his new sobriquet translates as “fearless.”

Another European market for American golden- and silver-age comics was Sweden. The wild west was a uniquely American subject that appealed enough for a comic to be assembled from various western-themed sources. Dating from 1953, the comics inside the beautifully-printed “Tom Mix with Buffalo Bill” ranged from classics (“Tom Mix,” “Frisco Kid,” “Buffalo Bill,” and “Lash LaRue”), to dense one-pagers (“De Dog Med Stövlarna På” [translation: They Died with their Boots On] and “Slaget vid [Battle of] Little Big Horn”) to the forgettable (“Ugh,” a silent comic featuring a native American girl). Also included, rather inexplicably, was “Kevin the Bold.” Maybe the comic’s connecting theme wasn’t the wild west — perhaps it was horses. At any rate, “Kevin” was the only American comic renamed in Swedish (here called “Roland den Djärve” — which indeed translates to “bold”.

The “Kevin” sequence covers three and a half comics that ran at the tail end of 1951 — a memorable sequence where Kevin fights Baron von Blunt to the death. Interestingly, the comics aren’t simply reprints of tabloid pages. The artwork has been edited quite a bit. Throwaways aren’t the only panels that disappear, and a few other panels are expanded with line work that isn’t a very convincing imitation of Kreigh’s. The comic ends abruptly — in fact, the next one in the sequence (January 6, 1952) is a cliff-hanger (literally!). 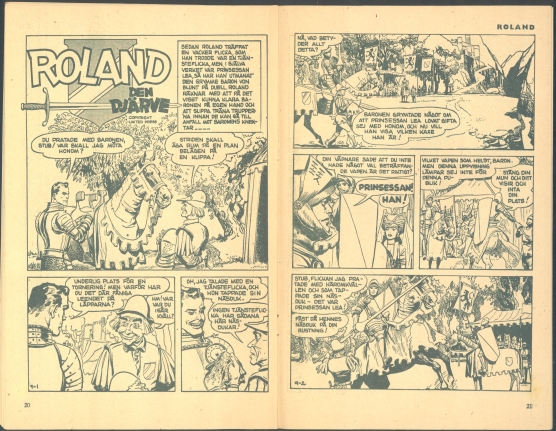 One thought on “Kevin the Scandinavian”