Kevin manages to escape with the drugged prince, but when he comes to, Rupert’s confusion quickly changes to fear.

The November 30 and December 7 episodes are beautifully-printed examples Chicago Sunday Tribune, but Rupert’s fear is somewhat overstated in the second panel below, with his overly worried expression and his jaundiced complexion—indeed, he is yellow. 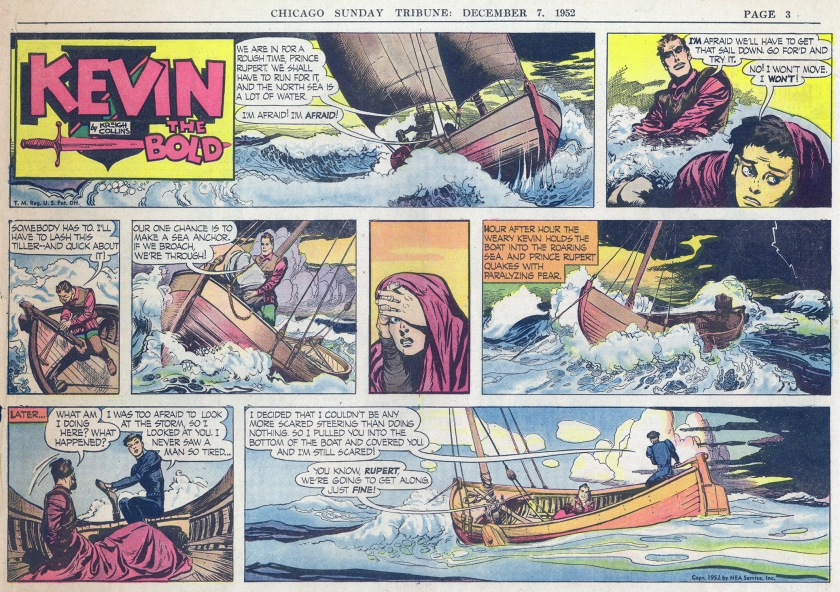 A casual reader might see Kevin or Rupert sailing the longboat into the ferocious storm, but what they were doing was trying to keep the boat’s bow pointed into the wind until the storm blew over. A quick check of the term “broach” yields the rightfully scary-sounding definition “[broaching] can cause the boat to enter a death roll… and if not controlled may lead to a capsize or pitchpole and turning turtle.” Knowing how to utilize a sea anchor is useful information to a sailor, and events in “Kevin the Bold” called for the device every four or five years.

I’m sure a sea anchor is mentioned once or twice in Collins’ final NEA comic strip, “Up Anchor!” I also remember my father describing them while we sailed together—I guess they were part of regular conversation in the Collins household.

Meanwhile, things are grim in Lutenberg, and as Kevin and Rupert approach England, Kevin ponders how to help the young prince overcome his fears.