The orphan Glenn, his dog Inky and lovely Maria are bound for Spain. They sail aboard the Sea Hawk, with Kevin acting as their escort. Glenn fiercely defends his dog after witnessing some ill treatment by Captain Mendoza. In defending Glenn, Kevin nearly comes to blows with Mendoza. The captain’s reputation as a scoundrel has proven to be accurate. In the October 18 comic, tempers flare again. 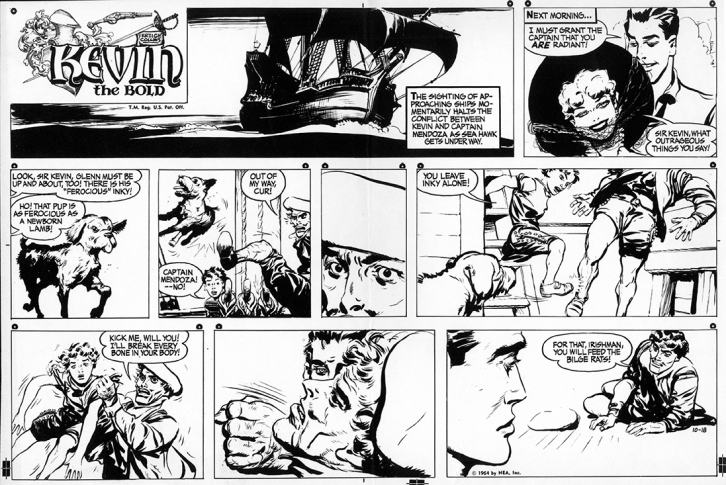 The sails of an enormous fleet have been spotted on the horizon. As was his style, Collins has woven history into his narrative — “Kevin the Bold” often reads like an illustrated  historical novel.

Kreigh Collins had four sons. Like-named characters based on the older two were featured in “Up Anchor.” The younger boys were twins, and one was named Kevin. I’m not sure exactly which was named for whom, but the comic debuted five months before my uncle. Fourteen years later, a character named Glenn appeared — perhaps my other twin uncle thought this was just a bit overdue. Another common name between the comic strip and the artist’s family was Brett, Kevin’s ward and the name of Kreigh’s first grandchild. Again, the character preceded the person (this time by nine and a half years). Glenn’s dog Inky was modelled on not one of the family’s cocker spaniels, but on a neighbor’s dog (also named Inky) who spent a lot of time at the family house in Ada.