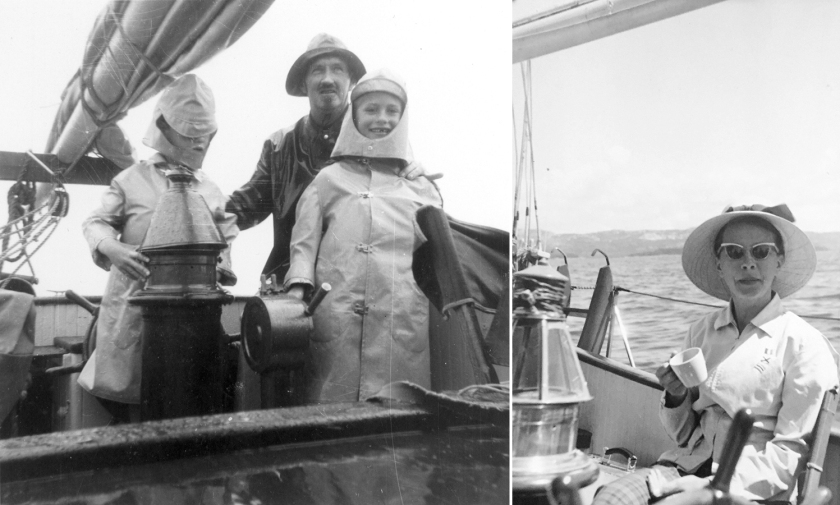 Kreigh: “Teddy, let’s sail the Great Loop with the twins.” Teddy: “Wouldn’t that be grand!”

“Up Anchor!” was narrated by Jane Marlin, who was loosely based on Kreigh Collins’ wife, Theresa. “Teddy” also had a hand in writing the strip, and the the November 24, 1968 episode, she also pitched in a bit with the illustration. I clearly recognize the handwritten labels on the drawings Jane holds from her numerous cards and letters over the years (and there were plenty of years—she lived to be nearly 102!)

Teddy definitely fit the idiom, “Behind every great man is a great woman.” After all, besides “the Skipper” and eight-year-old twins, she served as Heather‘s only crew during it’s year-long circuit of the 6,000-mile Great Loop. Made plain in the strip, traditional gender roles were largely held, so she was responsible for cooking, cleaning, and all the other typical roles of a mother. The original plan was to home-school (boat-school?) Kevin and Glen during the journey, so teacher could be added to the list, too. Of course, Teddy was used to adventuring with her husband—shortly after their 1929 wedding, they took a steamship to Europe and spent several months exploring the continent (mostly France). She chronicled the Great Loop journey in her diary, and later the material was published in an article that appeared in The World Of Comic Art. The late 1966 article was reprinted and used as part of an NEA promotional push, and some of this material was repurposed as “Up Anchor!” storylines.

After a bit of self-deprecation, another educational tidbit was dished out regarding alcohol fires.

Generally, the content of “Water Lore” didn’t reflect the action in an episode of “Up Anchor!,” but the December 1, 1968 episode was an exception, with its focus on cooking. Personally, I don’t have a lot of memories of sailing aboard Heather, but I do recall touching her smokestack once and burning my hand.

This wouldn’t be the last time Heather went aground.