In the autumn of 1949, things were looking rosy for the Kreigh Collins and the NEA. Newspapers that already carried “MItzi McCoy” were praising the upcoming nativity sequence. Fred Ferguson, of the New York Sunday Mirror gushed,  “The MITZI McCOY Christmas Story presentation is certainly a magnificent job. Gosh, but that boy can draw. The stuff is beautiful all the way through and here’s hoping that the sales response justifies all of Collins’ painstaking efforts. The story is also darn well done.”

The NEA’s salesmen were busy knocking on the doors of prospective targets — newspapers that didn’t yet carry “MItzi McCoy” and who might pick up “The Christmas Story” or start running “Mitzi” itself. The first sale was made when the Memphis Commercial-Appeal broke the ice. Several other newspapers would follow, including the Chicago Tribune.

The NEA made a run at a couple of newspapers close to Collins’ homestead in Ada, Michigan — The Grand Rapids Press and the Detroit News. While both papers’ general managers expressed interest in the series, they passed. (The following year, the Press started running “Mitzi” and the News began featuring Collins’ “Kevin the Bold” in 1951).

These days, Christmas preparations seem to come too early, with stores getting decked out for the yuletide season before Thanksgiving has passed. Things were less commercialized in the late 1940s, and the appearance in Advent of a Christmas feature was surely welcome, especially for children, for whom Christmas was the highlight of their year.

Without further ado, here is the third insalment, from 68 years ago today. 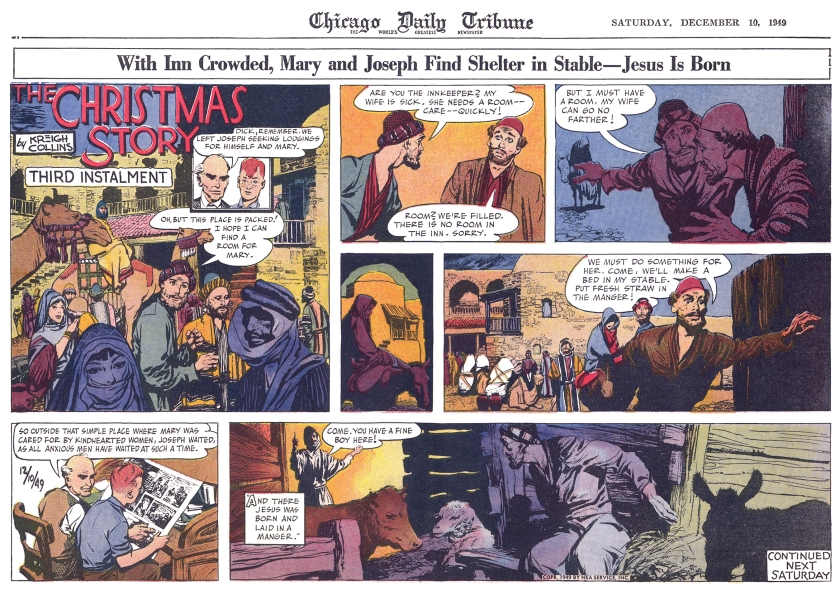