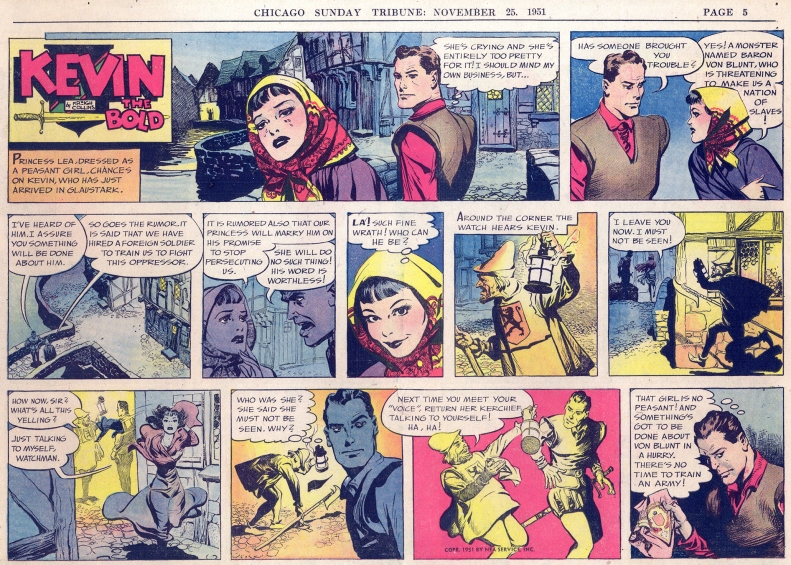 Brought together by chance, Kevin hears a firsthand account of the plight of the Glaustarkians from a beautiful young woman he initially believes to be a peasant. A nightwatchman soon confirms what Kevin had heard from the peasant, and Kevin realizes what must be done. 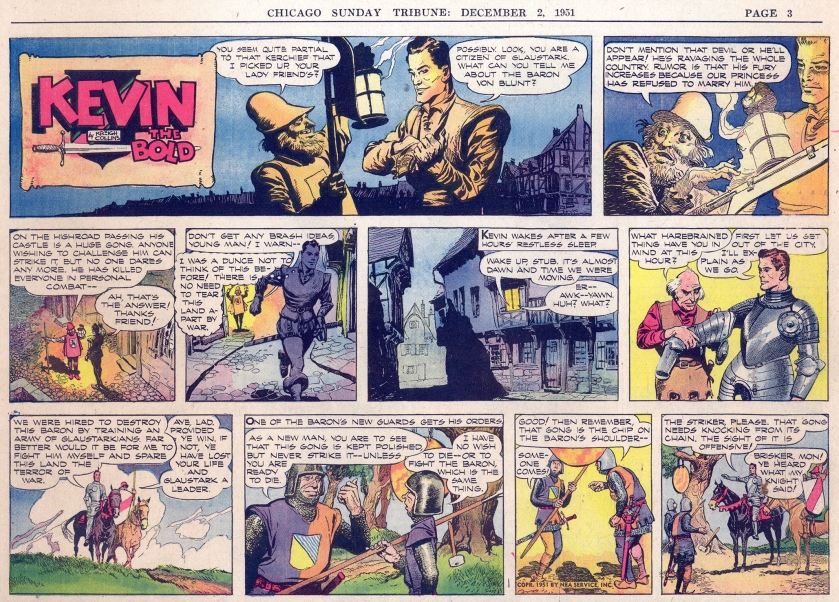 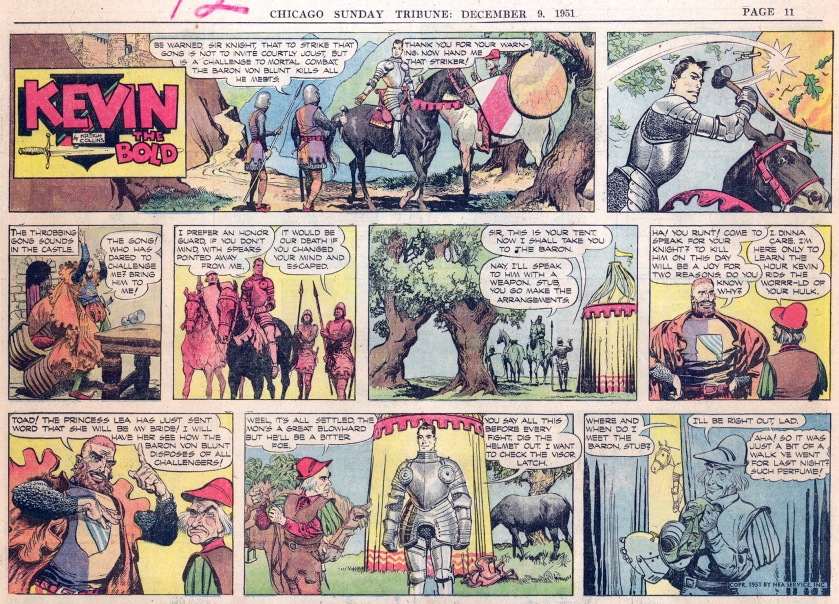 The December 9, 1951 comic is another gem. Its nine panels are filled with beautifully-illustrated horses and settings, witty dialog, and charming examples of the principal characters’ qualities. When Kevin strikes the gong, he startles his horse Satan, and appears to crack the gong itself. Stub fearlessly confronts von Blunt in one panel and nearly swoons at the end, when he discovers Princess Lea’s scented handkerchief.

In case you were wondering if the help wanted ad Kreigh Collins had placed in the Grand Rapids Herald produced any results, sure enough — it worked. A local gentleman named Frank Tatroe filled the bill. If you compare the second photo below with the penultimate panel of the December 9 comic, you can see for yourself.

Artists and illustrators often have models pose for them — Kreigh Collins frequently enlisted his family with the task. Occasionally, a special situation would call for a hired model, and such was a case for an early “Kevin the Bold” sequence. Getting a help wanted ad on the front page of the local paper was helpful, and the Grand Rapids Herald provided some nice promotion for Collins’ year-old comic.

The “special man” needed to be of a specific stature, as he would be donning a centuries-old suit of armor recently donated to the Grand Rapids Public Museum. Since historical authenticity was important to Collins, having a live model for reference would be very useful, as knights in armor were a staple of his comic strip.

The newspaper page was trimmed so that no publication date showed, but an article on the page had some information that placed it in late July of 1951. The NEA’s production schedule required comics to be inked two to three months ahead of their publication date, and with this sequence appearing in September, the timing of the newspaper article made sense.

The fifth “Kevin the Bold” sequence introduced a new villain, Baron Von Blunt. Was his new Flemish armor modeled after the set from the Grand Rapids Public Museum? 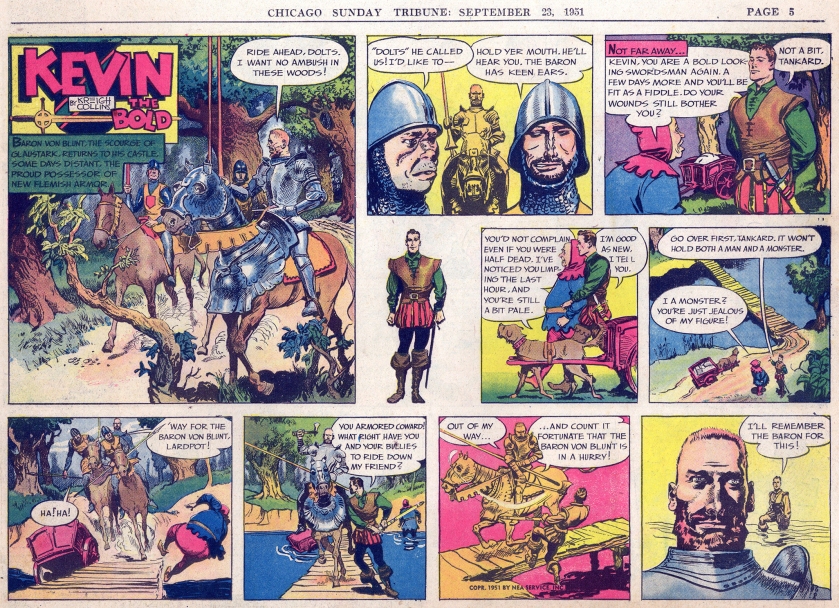 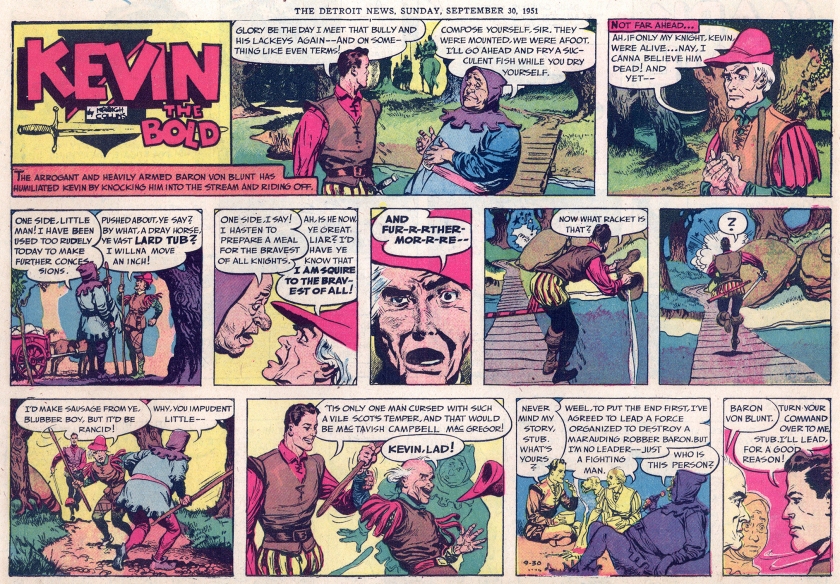 Most of the early “Kevin” comics in my collection are from the Chicago Sunday Tribune, but the September 30, 1951 comic shown above ran in the Detroit News. (Most likely, the comic had debuted in the News with this sequence). Collins’ artwork is especially strong in this period, but the printed results from the News are no match for those of the Tribune. 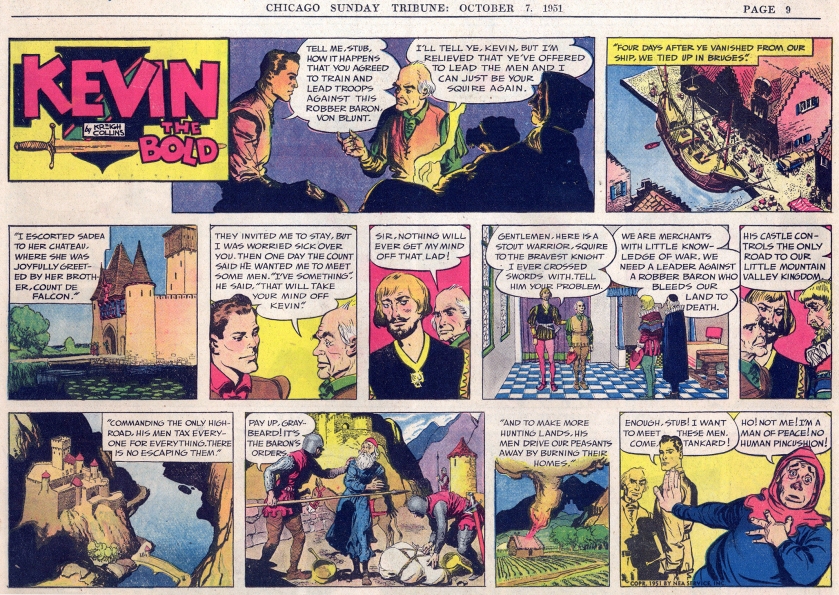 Kevin and his squire, Stub, had been separated during the previous sequence, in which Kevin was gravely injured. Once reunited, Stub fills his knight in on the details of the task he has been assigned — training an army of men to face Baron Von Blunt, the same ruthless man that had already made an enemy of Kevin. The October 7 comic is another beauty from the Trib, with more to follow.

Of note: The Grand Rapids Public Museum has a rather impressive collection of Kreigh Collins’ original artwork.