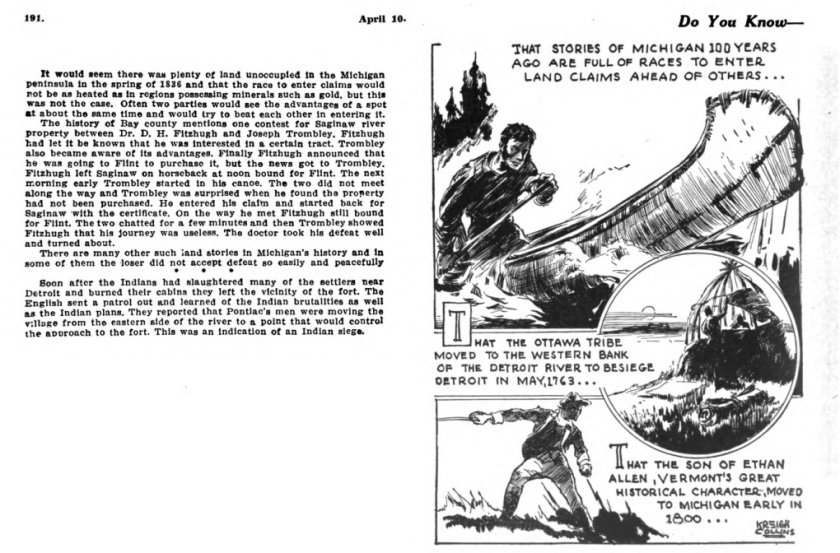 Having to produce so many illustrations on such a tight schedule led to a bit of recycling — in several instances, Kreigh Collins “resurrected” visual references he had used previously in his then-short career for some “Do You Know” panels. Among them were a birchbark canoe, a seated child, a ship’s helmsman, and a black cocker spaniel.

As a newlywed, Kreigh and his wife Theresa spent a summer in a log cabin near Leyland, in northern Michigan. In exchange for rent, Collins bartered with the cabin’s owner—a painting of the landlord’s choice from those produced over the summer. While living in this rustic environment, Kreigh found an abandoned birchbark canoe, which he restored. It appeared in numerous early examples of his work, including a magazine cover he illustrated that summer for Outdoor America, as well as the April 10 episode at the beginning of this post. (If you look closely, you can see his wife’s initials inside a heart carved into a tree on the magazine cover).

Another example of recycled imagery is found in one of the illustrations Collins did for the Informative Classroom Picture Series, an in-classroom teaching aid. In this case, the ICP illustration of the seated boy preceded the “Do You Know” version by about two years.

During the early 1930s, Collins produced many large murals, some commissioned by the WPA. One of these included a massive, four-panel painting for the East Grand Rapids High school (which is still on display). The EGR sporting teams were known as the Pioneers, and Collins’ painting fittingly depicted the settling of the land. The first of the four panels portrayed an ocean crossing, and the entire mural was unveiled the same year as its corresponding “Do You Know” episode appeared in the ten Booth Newspapers (1935).

A final example of this thriftiness of source materials was Kreigh and Theresa’s black cocker spaniel, Inky, who was later repurposed as a 1930s Christmas card.

Throughout his career as an illustrator and cartoonist, Collins frequently utilized his wife as a model. On the example from March 23, Theresa is posed as Mme. St. Aubin. Kreigh and “Teddy” were in their late 20s when he was working on the “Do You Know” series, and on the occasion of her 30th birthday in 1936, “Do You Know” seemed a fitting starting point for a home made birthday card . 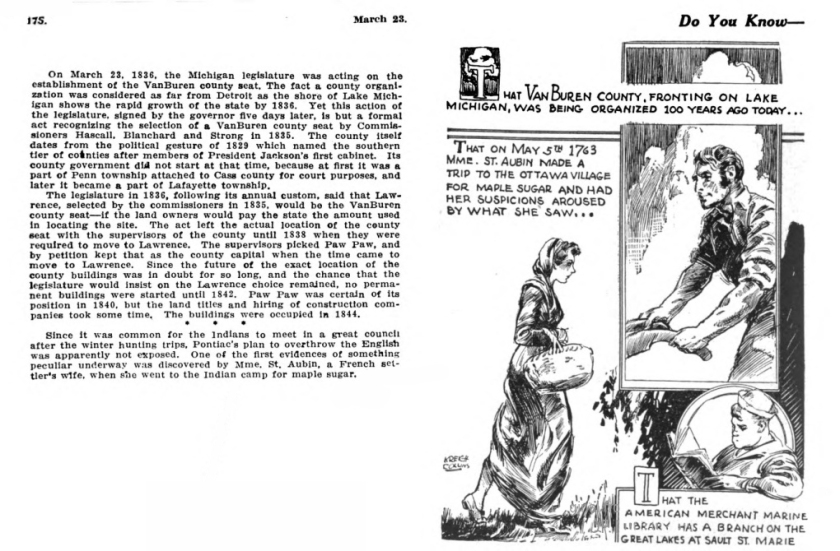 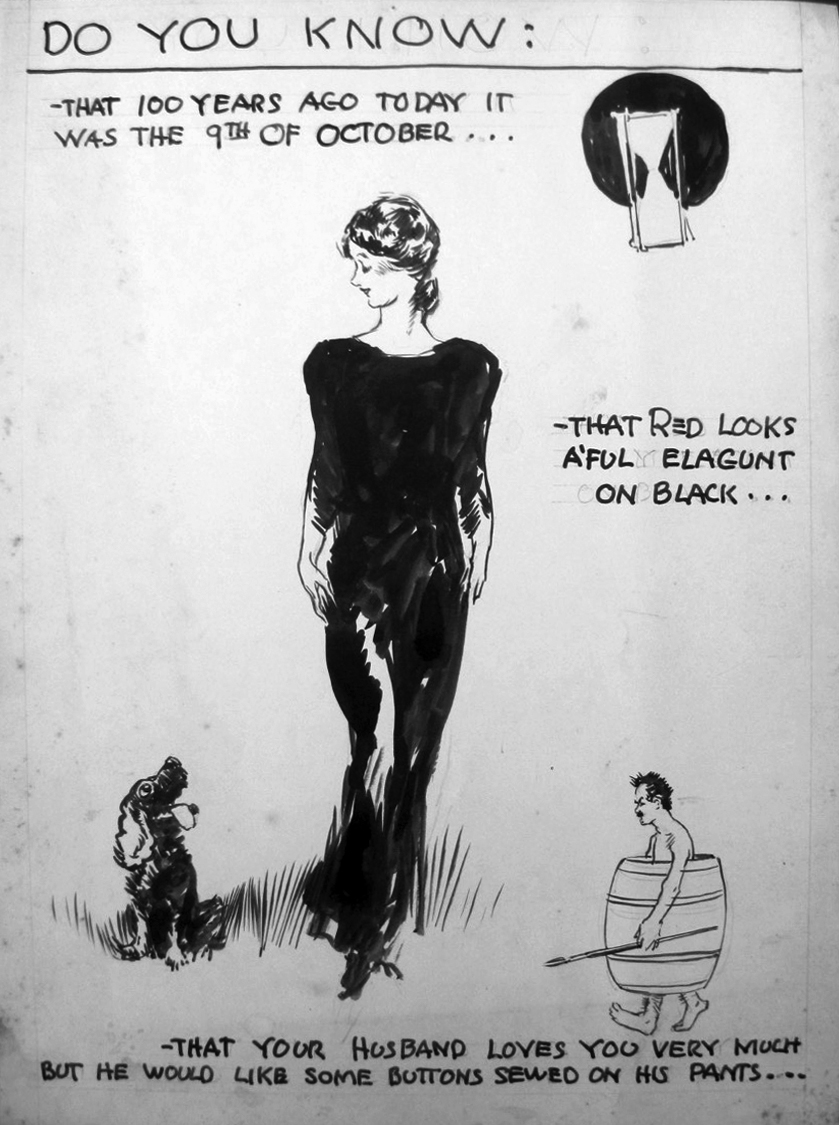 Inky even showed up on the birthday card.

Taken out of context, some “Do You Know” illustrations can be pretty humorous, as when Pontiac tells his French counterpart to “talk to the hand.” 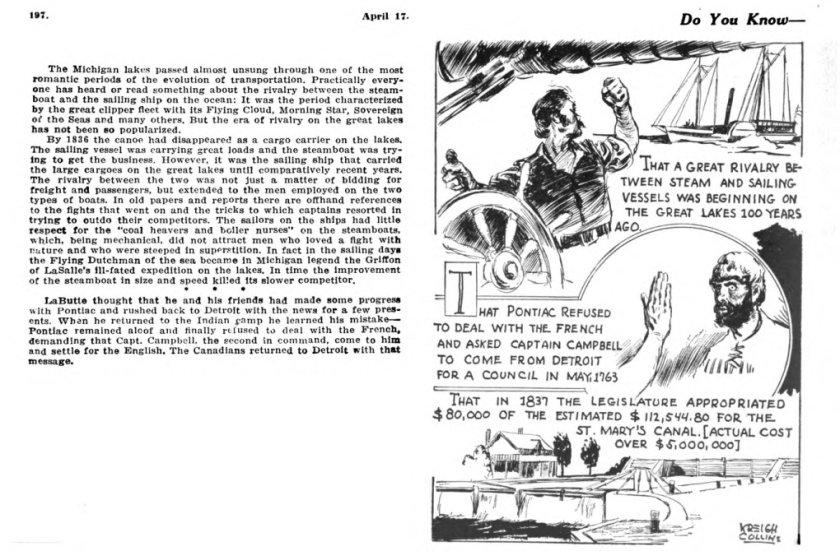 Next week, “Kevin the Bold” returns… 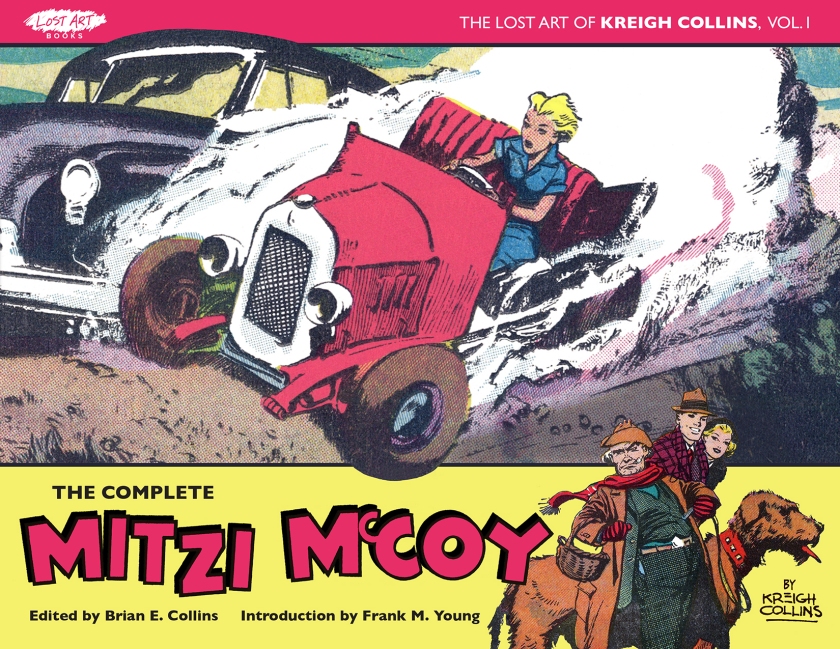 …the only place to order The Lost Art of Kreigh Collins, Vol. 1: The Complete Mitzi McCoy, is here.